And the U.S. military, he said, is leading the effort, developing air and ground vehicles that can use biofuels — synthetic mixes of conventional JP-8 fuel and gas made from animal fats or plants.

Obama’s speech before a gathering of servicemembers at Andrews was intended to highlight the administration’s drive for energy independence. Alternative sources of energy are part of the plan, along with new nuclear power plants and offshore oil drilling — energy sources that have not been pursued in a generation and that represent a significant shift in thinking and action for a Democratic president.

Obama said his administration will consider areas along the mid- and south-Atlantic coasts and the Gulf of Mexico for oil drilling, while continuing to study and protect sensitive areas in the Arctic.

“That’s why we’ll continue to support development of leased areas off the North Slope of Alaska, while protecting Alaska’s Bristol Bay,” he said.

The military is already moving to alternative fuels, he said, pointing to the armored vehicle and jet — nicknamed the “Green Hornet” for its use of a “green” fuel — parked in the hangar.

“The Army and Marine Corps have been testing this vehicle on a mixture of biofuels,” Obama said. “And this … ‘Green Hornet’ will be flown for the first time in just a few days, on Earth Day. If tests go as planned, it will be the first plane ever to fly faster than the speed of sound on a fuel mix that is half biomass.”

The Air Force has already flight-tested an aircraft using a biofuel.

On March 25, an Air Force A-10C Thunderbolt II took off from Eglin Air Force Base, Fla., using a synthetic fuel that included a biofuel from a weed-like plant called camelina. Camelina is a good fuel choice in that it needs relatively little water to grow and is not used as a food source, officials said.

While corn has often been touted as a great source for biofuels, relying on it to meet energy needs potentially puts farmers between a rock and a hard place, forcing them to decide whether to sell their corn as either an energy or fuel source. Critics say there’s more money to be made selling it as fuel, which, in turn, would make the global price for corn-based food skyrocket.

Obama said American reliance on foreign oil is as much a national security issue as an economic one. 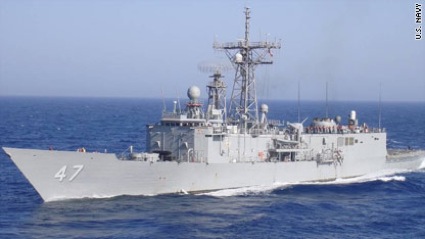