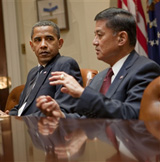 WASHINGTON, Aug. 4, 2009 – As the administration works with Congress to shore up gaps in Post-9/11 GI Bill benefits, President Barack Obama said today he wants to be inclusive, not exclusive, in extending those entitlements.

That could be good news to National Guardsmen mobilized after Sept. 10, 2001, but under their state governor’s control – the so-called “Title 32” authority. They’re currently ineligible for benefits under the new law, while their National Guard comrades who served in a federal Title 10 capacity can receive them.

It’s also good news to veterans or their families attending private schools in California – who until a deal reached today with the VA, couldn’t receive benefits under the Post-9/11 GI Bill due to a technical glitch.

Obama told military reporters today he’s excited about the new educational benefits that took effect Aug. 1 and what they mean to veterans, their families and the country.

Like the World War II veterans who benefitted from the original GI Bill, they will become the highly educated workforce that helps “drive economic growth for many years to come, even as it provides a tangible reward for the people who have made such extraordinary sacrifices on behalf of our country,” he said.

“My general philosophy is that somebody who served in uniform on behalf of our safety and security, they should be eligible,” he said. “We want to be inclusive rather than exclusive. We want to encourage more people to use the program rather than less.”

Extending benefits to this group will require a legislative change, and Obama said his staff is working with Congress and the appropriations committees, “sorting through anybody who has fallen through the cracks” and doesn’t qualify for benefits.

“A number of these issues, we are still working through,” Veterans Affairs Secretary Eric Shinseki said, citing initial problems that threatened to prevent thousands of veterans in California from receiving tuition payments under the new law.

“There was some question as to whether veterans who were attending private institutions in California were going to be eligible because of the unique nature of how California described its tuition versus its fees,” Obama explained.

The problem was that California refers to its students’ payments as “fees,” not “tuition” – a semantic difference that meant a student attending private school in California would have received much less of a basic tuition benefit than students at private schools in other states.

The VA and California resolved the issue this afternoon, adopting a new definition that will eliminate that roadblock. “This solution will allow all veterans who want to attend a California school the same benefits as any other veteran across the nation,” Shinseki said in a VA news release issued after today’s interview.

Obama called the deal “part of a broader effort to work out the kinks in the system” as the Post-9/11 GI Bill is adopted.

Shinseki praised the new benefit as “an important part of fulfilling our promise to the men and women who have served our country so honorably.”

Obama noted that his grandfather and “many other members of ‘The Greatest Generation’ benefitted from the original GI Bill, and said today’s troops deserve the same. “This is the next greatest generation, and they need to have the same support,” he said.

Chairman Calls for Progress in Afghanistan

WASHINGTON, Aug. 4, 2009 – As the administration works with Congress to shore up…