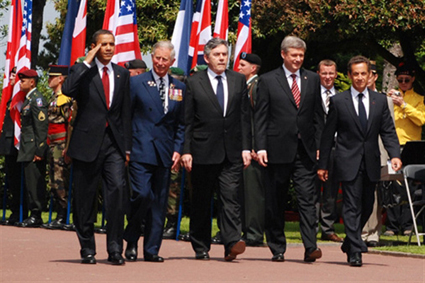 “You, the veterans of that landing, are why we still remember what happened on D-Day. You remind us that in the end human destiny is not determined by forces beyond our control,” Obama said. “Our history has always been the sum total of the choices made, and the actions taken, by each individual man and women. It’s always been up to us.”

Obama came to Normandy after the president visited Cairo, reaching out to Muslims to seek a new beginning and build new partnerships to fight violent extremists, and Germany, where he visited the site of the World War II Buchenwald concentration camp and wounded servicemembers at Landstuhl Regional Medical Center.

The allied invasion of Normandy marked the greatest seaborne invasion in history, with about 155,000 servicemembers, 5,000 ships and landing craft, 50,000 vehicles and 11,000 aircraft. The allies paid a heavy price for the daring assault; about 2,500 were killed and thousands more injured in the operation.

The U.S. First Army established a cemetery here June 8, 1944. The first American cemetery on European soil in World War II, today it is the final resting place for 9,387 servicemembers.