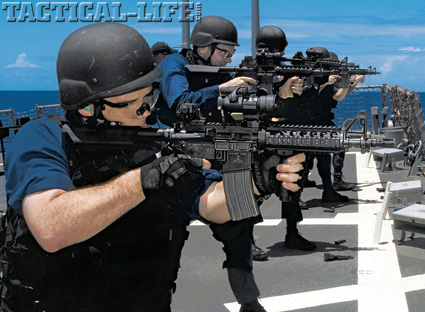 For several years prior to the beginning of the GWOT (Global War on Terror) the maritime armed services of the United States, namely the U.S. Navy and U.S. Coast Guard, had been actively interdicting drug smugglers and human traffickers that operate at sea. There were also instances when these forces had intercepted terrorists or deterred acts of piracy as well. Since the start of the GWOT on September 11, 2001 MSO (Maritime Security Operations) have been a high priority of both the Navy and Coast Guard. Although largely overshadowed by ground and air operations in Iraq and Afghanistan, these MSO missions have gained much attention since the pirate attack on the U.S. merchant ship Maersk Alabama and the hostage taking of her captain.

Special operations forces from the United States and other nations have played an important part in counter-terrorist and piracy operations. Captain Richard Phillips of the Maersk Alabama was saved by the marksmanship skills of a group of Navy SEAL team operators. Just days prior to that incident a team of French commandos killed two pirates and captured three others during a hostage rescue assault on the sailing vessel Tanit. In that operation four hostages were freed, but sadly a fifth hostage was killed. Although the contribution of these elite forces is certainly important, the majority of American operators engaged in countering these seaborne threats have been the VBSS (Visit, Board, Search and Seizure) teams from Navy ships and Coast Guard cutters.

BSS Team Makeup
U.S. military VBSS teams are sometimes highly trained and specialized such as the Coast Guard’s Maritime Safety and Security Teams. Still others have limited training, such as sailors that volunteer to participate on a VBSS team when needed. These volunteers are normal crew members that perform the VBSS mission in addition to performing their primary duties. The distinction between these teams can be compared to the difference between a large full-time police S.W.A.T. team and small part-time team. No matter what kind of team, both Navy and Coast Guard regulations ensure that certain training criteria be met in order for the teams to operate safely and effectively.