by Jeff Hall
in Uncategorized
0 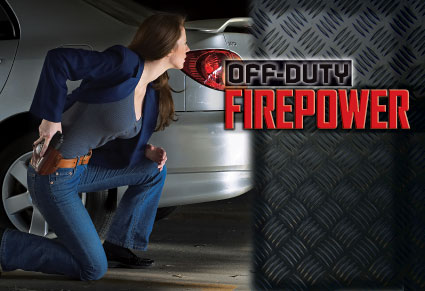 There is an old Chuck Norris movie called Force of One, where Norris is a Chicago copper. In one scene, two goblins walk into a bar to pull a robbery; It turns out to be a police bar, and the would-be robbers are suddenly looking down the barrels of dozens of handguns. 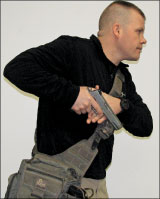 The same thing happened in Las Vegas, but with a different ending. Three Mexican males, illegal aliens, tried to pull a robbery at a club, opening fire as soon as they walked in the door. An off-duty Metro officer named Dennis Devitt, armed with a .25 Beretta pistol, engaged in a face-to-face gunfight with one of the robbers. Each was shot several times, with the officer surviving and one gangster dead.

There was another incident just before Christmas of 2007, in Salt Lake City. An active shooter opened fire in a mall, and was confronted by an off-duty officer. The officer was able to pin down the shooter until other officers arrived and killed him. The off-duty officer was armed with a Kimber 1911, but was not carrying a spare magazine. Still, the fight ended well for the good guys.
Most of us carry guns, whether off duty or retired. Thanks to HB 218, retired officers can carry a concealed weapon in every state and city in the country. Most off-duty cops routinely carry a handgun, but many fail to follow through with enough gun or enough gear should they get into a fight.

There are four things to be balanced when deciding whether or not to carry a gun off duty—power, concealability, availability, and familiarity. We’ll look at each of these and try to help make informed decisions as what, and where, to carry.

Carry The Power
Power is self-explanatory. The officer should carry enough gun to get the job done. I’m not sure why many officers carry a .40 on duty, crying for a .45, but happily carry a .25 off-duty. I’m not going to get into the “9mm is a .45 set on stun” argument, but most will agree that a .22 short is not gonna cut it.

Most agencies have policies as to minimum caliber, usually .38 Spl or .380. Both of these are at the low end of the power scale, but can be effective with well-placed shots. A .22 Magnum actually delivers comparable terminal energy to a .38, and I know several officers who carry the S&W 351 PD as an off-duty or back-up gun. I own one, like it, but think of it as a contact-shot-to-the-head gun—if I can get close and make an 18-inch shot, like Devitt did, it’d be fine. It would not, however, be my choice for a stand up gunfight, and the .38 and .380 fall into the same category. I will confess, however, to dropping a S&W Model 442 into the front pocket of a pair of shorts when I run to the store.

For many of my years in Alaska, I carried a S&W Model 29, 6.5 inch .44 Magnum as my off-duty gun. I shoot it well, love the caliber, and the gun handled exactly like my duty revolver. Most folks think that it’s too much gun for routine carry, though, and they are probably right.

The usual array of 9mm, .40 S&W, and .45 ACP pistols are all good choices for off-duty carry. The mini-Glock, the Springfield EMP, and small 1911-pattern .45’s all give the officer a wide variety of suitable calibers for serious social intercourse. Once a decent caliber is selected, it brings us to the next problems.

Concealed, Yet Ready
Concealablity and availability work hand in glove; they can’t be separated. Some agencies require that the gun be completely concealed at all times, others are not so concerned. I’ll work on the premise that we need the gun to be out of sight, but still accessible when needed. The best gun in the world is of little use if you have to completely undress to get it, so the inside the jockstrap mode is not too desirable.

The IWB (inside the waistband) holster meets both of these needs. The gun can be totally concealed under a t-shirt, but readily available when needed. I personally like the Blade-Tech holsters—they are indestructible and are not affected by sweaty skin.

Many shooters prefer strong-side with a standard belt carry. If I choose to carry a full-size 1911, I use the same Blade-Tech belt holster I train with most of the time. This way, everything is the same as it is when I practice, with the added step of sweeping the garment out of the way.

Shoulder holsters have largely fallen out of fashion, but are still viable in a variety of situations. If your off-duty time is spent in outdoor activities, shoulder holsters are a good way to go. Where I come from, off-duty carry also involves the consideration of large carnivores, so a shoulder holster with a larger pistol may be warranted.

The multitude of “tactical” vests and clothing give many good choices for concealment. They allow total concealment, good availability, and the ability to carry ancillary gear (reloads, flashlight, handcuffs, etc.). The only complaint from many officers is that they scream “COP”! Bad guys aren’t all stupid, and if not being made is important to you, these vests won’t work. A lightweight, loose-fitting shirt, like a 5.11, can accomplish the same goals and be less noticeable. Roll up the sleeves and it can be worn unobtrusively on the hottest day.
Another consideration is a bag of some kind. You can call it a “man purse” or a more derogatory name, but the fact is that they are a viable means of carrying a gun. The outstanding Maxpedition Jumbo Versi-Pack pictured was carried by Officer Boothe to Disneyland; he had water, his cell phone, a camera, a SureFire E2E light, flex cuffs, a Glock 22, and two spare magazines in hand, all the time. I just carried one on a training job overseas, and found it to be great. The usual fanny pack, in nylon or leather, does the same thing.

Ankle holsters are more of a second gun than an off-duty choice among the officers I train. There doesn’t seem to be any reason for off-duty carry on the ankle, but if you find such a situation, there are many good ankle holsters on the market.
The “Belly Band” is another mode of carry that offers deep concealment. I like mine, especially with the Springfield EMP, but the gun is slowwwww to get to. That being said, I usually carry it when I wear slacks and a golf shirt without a jacket.

Familiarity Breeds Success
Familiarity is something we often overlook. If all you ever carry is a Glock 22 on duty, and it’s all you ever shoot ’cuz the department buys the ammo, a Desert Eagle in .50  is not a good choice for off-duty. When the balloon goes up, you’ll be holding a gun in your hand while you try to remember where the controls are.

I’ve owned almost every gun you can think of—from a .44 to a Broomhandle Mauser—and carried everywhere from a shoulder holster to shoved into my waistband. As I learned more about real fighting, I realized that simple is better.

Let’s say the Glock 22 is your duty gun. You train and qualify with it on a regular basis, and are proficient with it. It’s not the smallest gun around, but not the biggest, either. You have training records on file showing consistency with that gun over a period of years, which helps out a LOT in court. Why not buy a good IWB holster, strong side carry, and call it good? Your hand goes to the same place it has for years, establishes the same grip on the same set of stocks, and completes the presentation in the same manner as in all of that other practice. No thinking, no wasted movement, no difference in trigger: This means a higher hit probability.

Don’t forget a little support gear to go along with the gun. A reload is mandatory! I don’t care if you carry a 27 shooter, carry spare magazines—bad things happen, and running dry in a fight is an ugly, preventable situation. A trooper friend of mine shot a guy 14 times, all good hits, with a Browning Hi-Power—he had no spare magazine, so he had to pick up a revolver from a wounded trooper to finish the fight.

Handcuffs. What are you going to do once you’ve caught him? There are several good, lightweight ties on the market if you don’t want to carry real cuffs.

A small light is vital. Goblins like the dark of night, so a SureFire E2E or Defender is nice to have. If you carry a light on duty, why not carry one while off duty?

I’ve lately found myself going to the same setup 90 percent of the time—the Nighthawk T3 1911, a spare Wilson ETM magazine, and a SureFire E2E light. I use the Blade-Tech IWB holster, strong side, behind the hip, and a Blade-Tech Kydex mag pouch. I cover it all up with a lightweight 5.11 shirt and am good-to-go. I gives me power, concealability, availability, and familiarity, and ups my chances of winning should I get into a situation I can’t get out of. You should think along the same line if you decide to carry off-duty.

Carrying a gun can be a pain in the butt. You have lots of considerations to balance, as I’ve outlined above. I’ve been carrying a gun on a regular basis since 1970, and feel naked without one. With mall shootings, school shootings, church shootings, Islamic terrorists, crank addicts, gangsters, and all sorts of other goblins running around, I’ll err on the side of caution and carry the damn thing. I have car insurance, too. Make a good off-duty gun and gear just like that American Express card—“Don’t leave home without it.”