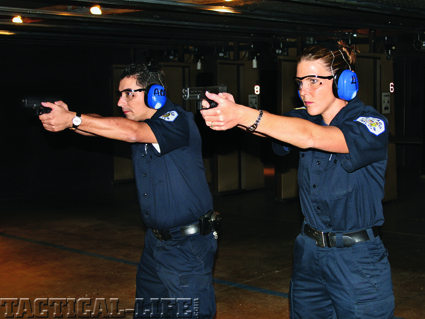 Don’t rely simply on shooting skills to save your life. Even the most capable officers can become statistics if they let down their guards.

The Chicago Police Department was rocked by the murders of three of their officers in mid-2010. Each was off-duty at the time of their shooting. In their tragic deaths there are lessons to be found, one of which is that when you’re alone and under attack, you can’t wait for the first responding back-up officer to arrive – you may be, at least at the moment, the only officer who can respond.

Deadly Cases
Case One, on May 19, 2010, CPD Officer Thomas Wortham, IV had recently returned from his second tour in Iraq, and motorcycled to his parents’ home to show them some photos from overseas. Leaving their house shortly before midnight, he was set upon by several punks attempting to steal his motorcycle. There was gunfire. Wortham’s father – a retired CPD sergeant himself – emerged from the house armed with two handguns and engaged the perpetrators, killing one and severely wounding another, though two more escaped. The younger Wortham, aged 30, who had been on the force for three years, died of his wounds. At this writing, the surviving perpetrators are all in custody awaiting adjudication. I have been informed that the slain officer was able to put a bullet into at least one of his antagonists before he fell.

Case Two, on July 7, 2010, CPD Officer Thor Soderberg, 43, had completed a day shift and was at his car in the supposedly secured parking lot at a South Side police station when he was set upon by surprise by a lone attacker. According to one report, Soderberg had been putting his duty belt into the open trunk of his car at the time of the attack. The assailant was able to gain control of Soderberg’s pistol and shoot him fatally in the face, head, and back. After firing more shots at others, the perpetrator was shot in the torso and felled by responding Chicago officers. He survived his wounds and at this writing is awaiting adjudication. Officer Soderberg, with 11 years on the job, was a very physically fit athlete, and a Chicago police academy instructor. As best I can determine at this time, Soderberg did not have a back-up gun he could deploy when his killer got hold of his service pistol.

Don’t rely simply on shooting skills to save your life. Even the most capable…