WASHINGTON– If more resources are required after the commander of NATO and U.S. forces in Afghanistan completes his assessment of the situation there, a separate process would follow, Pentagon Press Secretary Geoff Morrell said today.

The Afghanistan review and reports about Russian submarines patrolling off the East Coast of the United States were among topics Morrell discussed at a news conference.

Army Gen. Stanley A. McChrystal’s assessment will not contain any requests for resources, Morrell said.

The Afghanistan assessment will focus on the situation on the ground and the way ahead, Morrell said. But, he added, “it will not offer specific resource requests or recommendations.”

If the review determines that additional resources are required to complete the Afghanistan mission, requests would then go through the normal chain-of-command process, Morrell said, to be validated and forwarded to Gates. Gates then would decide whether to recommend to the president that he commit additional resources for the Afghanistan mission.

Gates and Navy Adm. Mike Mullen, chairman of the Joint Chiefs of Staff, flew to Belgium over the weekend to meet with senior U.S. commanders and NATO officials to discuss the situation in Afghanistan. The secretary was impressed after viewing a briefing detailing the progress of the Afghanistan review thus far, Morrell said.

Turning to other news, Morrell said the U.S. military was not worried about news reports that Russian submarines were traveling in international waters a few hundred miles off the U.S. eastern seaboard. The U.S. military was aware of the approach and presence of the Russian underwater vessels, he said.

“So long as they’re operating in international waters — as, frankly, we do around the world — and are behaving in a responsible way, they are certainly free to do so,” Morrell said, “and it doesn’t cause any alarm in this building.” 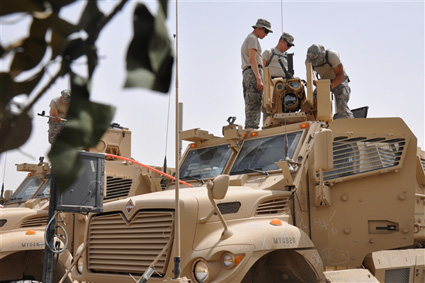 WASHINGTON– If more resources are required after the commander of NATO and U.S. forces…