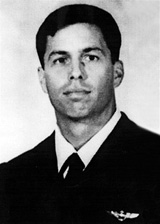 WASHINGTON, Aug. 2, 2009 – Remains found last month in Iraq’s Anbar province are those of Navy Capt. Michael Scott Speicher, who was shot down flying a combat mission in an F/A-18 Hornet on Jan. 17, 1991, and whose fate until now had been uncertain, Defense Department officials reported today.

Acting on information provided by Iraqi civilians, Marines stationed in Anbar province went to a desert location believed to be the crash site of Speicher’s jet, and the Armed Forces Institute of Pathology positively identified remains recovered there Speicher’s.

“The news that Captain Speicher’s remains have been recovered is a reminder of the selfless service that led him to make the ultimate sacrifice for our freedom,” President Barack Obama said in a statement released today. “As with all our servicemen and women considered missing in action, we remain steadfast in our determination to bring our American heroes home.

“I am grateful to the Marines who pursued the information that led to Captain Speicher’s recovery so that he can now come home,” he continued. “My thoughts and prayers are with his family, and I hope that the recovery of his remains will bring them a needed sense of closure. ”

Navy Secretary Ray Mabus also expressed his condolences. “Our thoughts and prayers are with Captain Speicher’s family for the ultimate sacrifice he made for his country,” he said. “I am also extremely grateful to all those who have worked so tirelessly over the last 18 years to bring Captain Speicher home.”

The Navy’s top uniformed officer praised the effort to determine Speicher’s fate and expressed gratitude for the fallen aviator’s sacrifice. “Our Navy will never give up looking for a shipmate, regardless of how long or how difficult that search may be,” said Adm. Gary Roughead, chief of naval operations. “We owe a tremendous debt of gratitude to Captain Speicher and his family for the sacrifice they have made for our nation and the example of strength they have set for all of us.”

In early July, an Iraqi civilian told Marines he knew two people who recalled an American jet crashing and the remains of the pilot being buried. One of those people said he was present when Bedouins found Speicher dead and buried his remains. The Iraqis led Marines to the site, and the Marines searched the area. Remains were recovered over several days during the past week and were flown to Dover Air Force Base, Del., for scientific identification by the Armed Forces Institute of Pathology’s Office of the Armed Forces Medical Examiner.

The recovered remains include bones and skeletal fragments. Positive identification was made by comparing Speicher’s dental records with the jawbone recovered at the site. The teeth are a match, both visually and radiographically, officials said.

While dental records have confirmed the remains to be Speicher’s, officials said, the Armed Forces Institute of Pathology DNA Lab in Rockville, Md., is running DNA tests on the remains and comparing them to DNA reference samples previously provided by his family. Results are expected tomorrow.

How Clean Is Your Glock?