WASHINGTON– Army officials have released the results of a study aimed at determining possible causes for a cluster of violent crimes that took place between 2005 and 2008 at Fort Carson, Colo.

The crimes took place during a busy period of deployments for the brigade. In 2004, a brigade combat team deployed from Korea to Iraq. Upon completion of its tour, the Army permanently stationed the brigade at Fort Carson. Less than a year later, the unit deployed to Iraq for a 15-month tour.

In the 16 cases of murder or attempted murder, 11 of the victims knew the perpetrators. Ten of the victims were male. Further information on the attacks has been withheld for privacy reasons under the Freedom of Information Act.

Army Surgeon General Lt. Gen. (Dr.) Eric B. Schoomaker discussed the study’s results yesterday with reporters in the Pentagon via telephone. Schoomaker was in Colorado briefing the results of the consultation, which was conducted by the Army surgeon general’s office.

The Army can identify “no single factor or grouping of factors” to explain the cluster of violent crimes committed at Fort Carson, Colo., since 2005, he said.

The study did not reveal any one single cause, but rather a comprehensive list of individual predisposing factors, such as prior criminal behavior, drug or alcohol abuse, prior behavioral issues and barriers to seeking behavioral health care, Graham said.

The surgeon general’s team looked at all risk factors, including the number of deployments, the intensity of combat during those deployments, law or conduct violations, behavioral enlistment waivers, and problems of alcohol and drugs.

“I reiterate: we can find no single factor or grouping of factors to explain these crimes,” Schoomaker said.

Army Secretary Pete Geren was so concerned he asked Lt. Gen. Michael D. Rochelle, the service’s personnel chief, to expand the investigation Armywide to see if deployments, multiple deployments or a policy that permits waivers to allow recruits with a record of misconduct to enlist play any part in violent crime.

“Between 2004 and 2008, 2,726 soldiers were identified as being involved in committing a violent crime, all out of 1.1 million soldiers,” Rochelle said during the conference call. “We examined the correlations and found that enlisted waivers were not — repeat not — a disproportionate factor in the commission of violent crimes.”

The service also found that deployments to operations Enduring Freedom and Iraqi Freedom also were not disproportionate factors in violent crimes.

Rochelle said the service will continue to monitor these statistics and report them to Army leaders. Army officials also will share its conclusions with the other services.

The general stressed that the statistics show the vast number of soldiers at Fort Carson and the rest of the Army are serving honorably and doing well.

Graham said the goal was more than just to study the rates and trends of violent crimes, “but to clearly identify all risk factors, assess the adequacy of all health programs and develop strategy to enhance our resources and support to reduce incidents of violence,” he said.

The command is taking measures to prevent future incidents. “We are training and educating our soldiers and leaders about the warning signs of high-risk behaviors,” Graham said.

The Fort Carson team is working on developing improved and more comprehensive screening to identify soldiers at risk and to follow-up on those high-risk soldiers and units.

Finally, the post is working to eliminate the stigma associated with seeking behavioral health care. “The Army’s new message is that it is a sign of strength, not weakness, to reach out for help for yourself or to escort your battle buddy to care,” Graham said.

U.S. Army Medical Command and post officials learned from the consultation and will make changes, Schoomaker said. “We’ll look at leaders at all levels and the importance of modeling behavior and creating accountability for misconduct,” the surgeon general said.

He called on all soldiers and all small-unit leaders to be more aware of drug and alcohol abuse and other forms of misconduct. Soldiers and leaders need to refer these people for care and rehabilitation, Schoomaker said.

“We need to do better,” Schoomaker said. 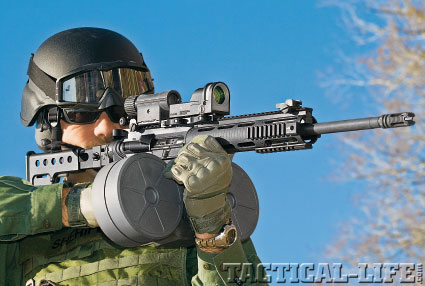