Oil platforms offer very appealing targets to terrorists and, off Nigeria at least, to bandits. Not only does terrorist occupation of an oil platform offer potential for impeding the flow of oil and destroying a valuable asset, it also has the potential for a massive environmental disaster. Think of the problems resulting from the 2010 Deepwater Horizon oil spill in the Gulf of Mexico, for example, and magnify that should terrorists sabotage one or more oil platforms. And there are also the oil workers who would be held hostage. Occupation of oil platforms off the coast of Nigeria has generally involved hostage taking and the threat of the destruction of the rig to extort concessions on oil revenues for local communities or to receive ransom for oil workers. 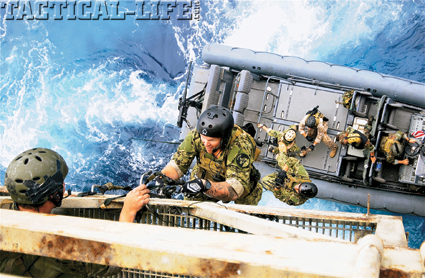 At least some governments and coun­­­­­­­­­t­­­­ries have chosen to take proactive measures to provide oil platform security. These may include radar, which scans the approaches for unidentified ships or boats, CCTV to scan the area around the platform, laser or other intruder-detection systems around the rig, MIDS (Marine Intruder Detection Sonar) to detect approaches from under the sea, patrols by small boats with armed crew members, and armed security personnel aboard the platform. Floating security barriers, such as the WhisprWave, may also be used to establish a security perimeter around a platform, normally with one entry point that channels any ships or boats approaching to the chosen point. Some security companies that provide oil platform protection hire personnel from naval and marine special warfare units who have extensive experience in threat assessment of oil platforms and other maritime assets to constantly evaluate platform security.

Using some combination of these protective techniques to stop terrorists/hijackers offers the best solution to protecting oil platforms. However, the naval special warfare units of those countries with a substantial number of oil platforms must be prepared, if necessary, to assault and retake a platform. Among the units especially well-trained to take down an oil platform are the U.S. Navy SEALs, the British SBS, Australian TAG (Tactical Assault Group) West, Indonesian PASKAL, Norwegian Marinejegerkommandoen, Danish Frømandskorpset, German Kampfschwimmer, and the Dutch SBS.

If a platform is taken, special operators tasked with retaking it face various problems. First, the location of an oil platform or platforms on the ocean allows hijackers to readily observe the area surrounding the platform to detect approaches. The very radar, infrared cameras, etc. that help protect a platform may be used by hijackers familiar with them or who force the operators to cooperate in watching for approaches. As a result, approaching helicopters or boats will immediately rouse their suspicions.

Almost certainly, hijackers/terrorists will take hostages aboard the oil platform and any assault forces must attempt to save them. Additionally, it is quite possible that the hijackers will rig the platform with explosives, which could destroy the platform, kill the hostages and create an environmental disaster.

In considering an assault on an oil platform, stealth and speed are critical. If a helicopter assault is to be carried out, it is best mounted at night using “stealth” helicopters such as those used by the 160th Special Operations Aviation Regiment [Think OBL takedown]. Equipped to fly at night and in bad weather, special operations helicopters can quickly approach an objective and deliver an assault force via fast-roping onto the platform quickly. For a helicopter assault to work, however, it would be best carried on a moonless night, preferably with weather bad enough to keep the hijackers inside or under cover.

It is possible, but very difficult, for heli­copter-borne snipers to take out targets on the platform at night and at any distance. Generally, a self-loading rifle with a night- vision optic would be used, but field of view can be a problem when using a night-vision optic at ranges beyond 50 yards. The U.S. Navy SEALs have a third-generation night rifle sight with 3.5X power and a 40-degree field of view. A very skilled helicopter-borne marksman could take out hijackers at night, but if it were necessary to assure a kill, multiple snipers would be optimum and that would require multiple helicopters.

Still another consideration with a helicopter assault is that hardcore terrorists might well have Stinger or other missiles and the helicopters would be sitting ducks while hovering to allow fast-roping. Helicopters could, in most circumstances, be used most effectively as a distraction by having them fly around the platform at some distance. Or, if resupply helicopters normally landed on the platform and the hijackers were willing to allow resupply, one might be used for a “Trojan Horse” insertion, but hijackers would most likely be very suspicious of anyone on board. Of the three most likely assault scenarios, a helicopter assault is least desirable unless operating against very inept hijackers.

More likely to succeed would be an insertion by fast boat onto the legs of the oil platform. Fast, stealthy craft such as the U.S. Navy M80 Stiletto, which can speed to a target at 50 knots or more while offering a very small radar signature and carrying a dozen SEALs, offer an option.
If used for a platform assault, the M80 would not deliver the SEALs directly onto the platform but would more likely launch them as close as possible in RIBs (Rigid-Hull Inflatable Boats). Once the SEALs or other combat swimmers reach the platform, they will climb the legs to reach the top of the platform to begin their actual takedown. Maritime Anti-Terrorism (MAT) units normally have extendable ladders for boarding ships and these may be deployed for boarding an oil platform.

The final and most stealthy method is an underwater approach under the platform and then a climb into an assault position. Possibly, the approach would be via SDV (Swimmer Delivery Vehicle), but swimmers might also have approached in a RIB and then swum underwater to reach the platform. As with other methods of approaching a hijacked oil platform, an underwater app­roach is most stealthy in bad weather but is also more difficult. Naval special warfare teams that practice underwater approaches to platforms have learned that an important skill is being able to gauge the rise of waves and ride them to their highest point before gaining a handhold on one of the legs. I understand that this is even more difficult than it sounds. Once the swimmers have managed to get handholds on the legs, the general practice is to send the best free-climber or climbers, if moving up multiple legs, to the platform to secure a ladder or rope for the rest of the assault team to climb. 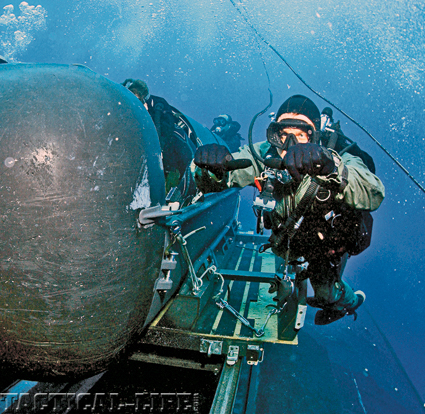 The most stealthy approach for an oil platform assault is underwater.

After the platform is reached, whichever approach method is used, operators begin their actual assault. They will have studied drawings of the platform and determined where hostages are likely to be held and where danger points for possible explosions or rupturing of hoses, pipes, etc. are located. The assault team will most likely have carried out training on the platform involved or similar ones and, hence, know how to quickly navigate its corridors. It’s an extremely high-risk, dangerous environment, so assault teams will definitely know what they are up against before getting on board.

Certainly, one tactic would be to quickly go for the power plant and cut the electrical supply to give operators wearing night-vision devices an advantage. However, the platform would be equipped with backup battery-powered lights so they would not be operating in total darkness. Members of the team trained in EOD would be assigned to quickly check the points on the platform where a device could cause the most harm. To lessen the chance of rupturing high-pressure hoses or pipes, pistols, SMGs, or shotguns are normally the weapons of choice rather than rifles. Suppressed weapons are best so that hijackers can be eliminated silently without alerting their fellow hijackers. Suppressed pistols or SMGs will also have less muzzle flash and, hence, less chance of igniting any gases. Because of the danger of fire, explosive stun grenades would not be used, though there are alternate stun devices that give off sound and light without an explosion.

Once the assault starts on an oil platform, it will be critical to move quickly and to keep moving until all hijackers are neutralized—and because of the possibility of the terrorists initiating explosive devices, terminally neutralized is best. Although rescuing any hostages will be a high priority, the possibility of an explosion, which could kill hostages and rescuers, will make disabling explosive devices the utmost priority.

We’ve skimmed the surface on oil platform ops, but you can still gather that such takedowns are extremely difficult. It is far better to spend the money on security, including a well-trained and well-armed reaction force, than to attempt to stop a disaster once a platform has been seized.
Another consideration, too, is that some developing nations have oil platforms but do not have highly trained naval special warfare personnel to protect them. As a result, some oil companies operating platforms in places such as Nigeria have contracted with private companies that have teams comprised of former SBS, SAS, Royal Marine Commandos, SEALs, USMC FAST (Fleet Anti-Terrorism Security Teams), etc., to carry out an assault on a hijacked platform if necessary.