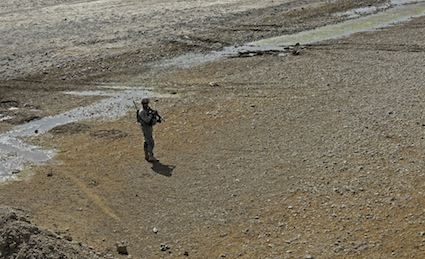 One in three U.S. veterans of the post-9/11 military believes the wars in Iraq and Afghanistan were not worth fighting, and a majority think that after 10 years of combat America should be focusing less on foreign affairs and more on its own problems, according to an opinion survey released Wednesday.

The findings highlight a dilemma for the Obama administration and Congress as they struggle to shrink the government’s huge budget deficits and reconsider defense priorities while trying to keep public support for remaining involved in Iraq and Afghanistan for the longer term.

Read the PDF report here. The results were based on two surveys conducted between late July and mid-September. One polled 1,853 veterans, including 712 who had served in the military after 9/11 but are no longer on active duty. Of the 712 post-9/11 veterans, 336 served in Iraq or Afghanistan. The other polled 2,003 adults who had not served in the military.

The poll results presented by the Pew Research Center portray post-9/11 veterans as proud of their work, scarred by warfare and convinced that the American public has little understanding of the problems that wartime service has created for military members and their families.