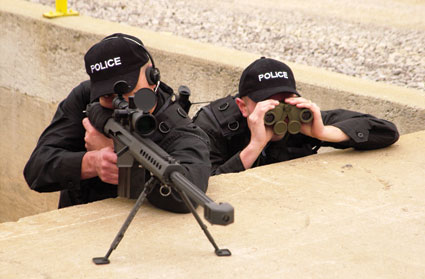 Deploying the “BIG 50” in the Police World
Since the day I fully immersed myself in the police sniper world some 10 years ago there has been a discussion  / argument / controversy as to the value of the .50 BMG in the hands of law enforcement.   While the attacks on 9/11, as well as a few incidents involving armored vehicles changed the argument, the argument is still in place today.  It may be that you have encountered hardened targets on prior operations. It may be you have a huge transit system and need a way to shut down a bus, train, or commuter rail at longer ranges.  It may be that you are at an agency where terrorism is really a threat. Whatever your reasoning, whatever your case may be, it’s up to you know whether it’s better to have a tool and not use it than to need a tool you don’t have.

It is nice to say the FBI or Military will “step in” if Al Qaeda comes a calling in your jurisdiction, but it will be your problem for many hours before that is even a possibility, or even a consideration.  For those agencies, the venerable 50BMG is a valid option, and maybe even a necessity.  There are certainly plenty of other choices out there for long range against soft targets, but the “Big 50” is still the king when it comes to going through cars, busses, trains, buildings, fences, and other structures at any range.

There are simply some things a 600-750 grain bullet will do that not much else will.  If you have a need for a round that will penetrate hardened targets or reach out to very long ranges this is a good one.  It does the job, is tried and tested, and is pretty much a known commodity.  It is not the latest and greatest, but it certainly has “been there and done that.”  It is used today in the Middle East for detonating IED’s  and car bombs,  and other Ordinance Disposal units are seeing its values as well.  For those that find a need there is simply nothing like a .50 BMG for shooting through fortified targets pretty much regardless of range.

I have experimented many times over the years with different rounds for stopping cars and it is hard to match the “stopping power” of the .50 BMG on engine blocks, rims, and other car parts.  The same will be true for busses, trains or other public transit. In fact, the biggest factor is that it won’t stop, and can cause a ton of collateral damage that must be taken into consideration if you are considering this round.  The very idea of using a rifle to stop cars, public transportation or equipment has its proponents and detractors, but there is little doubt that if you want to stop machinery or go though fortified positions, the .50 BMG provides some pretty good results.  It is not something you pull out of the bag often, but if the need arises it may be better to have the tool. 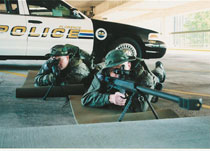 Not your Typical Sniper Rifle
Many agencies are implementing a “Heavy Sniper Rifle” program on their teams now and the .50 BMG is often one of their choices.  I really need to emphasize the fact that this is a system that has a very specific purpose. It is not for everyone, and even those agencies that need it will probably never use it or will use it very seldom. It is not for patrol, and it is not for just anyone on the team.  I would recommend this be a system utilized by an experienced sniper, and with a completely different training regimen and policy. This is not simply a “bigger sniper rifle” you use on a typical operation, or with the same skills.  It is in a world all by itself when it comes to the damage it can do.

Consider that the .50 BMG delivers 200% more energy at 1000 yards than your 30 caliber does at the muzzle.  You must train for the characteristics of the round, and the advantages and drawbacks that come with it.  You do not just hand this to your sniper and say, “go see what this will do.” Not everyone can shoot these rifles well.  They are not hard to shoot (the recoil is not that bad), but they are not like anything else.  The muzzle blast and over pressure are another story though.   I have seen people fire five rounds through a .50 BMG and get physically sick, that is probably not the guy to run the gun!  Some people get dizzy and others just get a really big grin on their face.  You probably want the guy with the grin to be behind the rifle. Find these things out first.  If you want your sniper to be proficient they need to shoot it, and they are not going to shoot it if they get sick doing it.

One of the problems many agencies face is a  place to truly learn the system and the cartridge.   These systems truly are not like anything else, and many ranges in fact won’t allow them on their property.  Since many police agencies share with civilian ranges make sure this is not an issue before you get one.  For those agencies that have ranges many are limited to 400 yards or even less.  Even if you do not intend to use a .50 BMG at extremely long ranges you still need a place to fire it enough to learn the ins and outs of the system and the cartridge.  Since what this rifle does best is go through stuff, then quite frankly you need to shoot “stuff” with it.  That means cars, busses, walls, trains, whatever it is you plan on using it in the real world.

Make certain you have some sort of paper target, or item that gives you an idea of the shrapnel that this round can give off when going through a car, bus, or other metal object.   It does not always make one hole in and one out.  Trust me, the hole on the other side of the block wall is bigger than the one at the front (if you can even find it). If it is being used in a hostage situation this is something you need to know before you use it.  It does you no good to stop the car and kill the hostage at the same time.  What is a really good backstop for a 308 does not really slow a .50 BMG down a whole lot. You really need to know how far down range this round can go AFTER it goes through the hardened target.

Lets go back to my energy analogy.  A local agency here shot a hostage taker with a 165 grain Tactical round through a glass window.  It went through the glass, him, two rows of Halloween costumes and lodged in a counter, in tact.  Now, consider that the 661 grain .50 BMG has almost twice that energy at 1000 yards with a bullet that is four times larger! You simply have to know what the round will do before you use it in the field.

Also, you really need to  consider that this weapon system is under a ton of scrutiny right now.  We still have states trying to ban it, and at least one already has. When you use this system, depending on where you are it is likely the world will know and there will be someone (probably with J.D. after their name) looking at your training and policy with a microscope.  You really need to have your training and policy squared away, and in writing.

There are as many things that can go wrong with a deployment of this  rifle that can go right, maybe more and you had better have trained for these things. I would not suggest it be chosen lightly, taken for granted, or deployed without significant consideration.  SWAT teams are under more and more scrutiny every year on just your normal operations.  We have really been removed from the shadows nowadays and every time you deploy you fall under increased scrutiny. Not only scrutiny from the media, but from your administrations, the media, and the public.  I cannot imagine the scrutiny being any less when you have to use a .50 caliber during an actual operation. I suggest you have all your proverbial ducks in a row before that happens.  I have certainly surprised my Chief on an operation or two throughout my years in Law Enforcement, but I would not suggest that be the case the first time you use a .50 BMG sniper rifle.

So, I really have not answered any questions out there that will not continue to be asked.  Whether a team needs a fifty caliber rifle is less important than it is to make certain that if you are going to use one, you must properly train and prepare for its operation.   It is not always an easy sell, and I am not a proponent of agencies getting them because they are “cool and fun to shoot.” A .50 caiber can be a fantastic tool that fills a niche for which nothing else really does.  If you need one then by all means get one, but make certain you know what you are doing with it and when to use it.  At the risk of being flippant I think Dirty Harry said it best when he said: “A mans got to know his limitations!”  In this instance it could not be more true.