Opinions on the Joint Chiefs and Combat Training

0
SHARES
0
VIEWS
Share on FacebookShare on Twitter
“If any of you maggots got the brains or nerve to ask me a good question, I’ll answer it right here!” 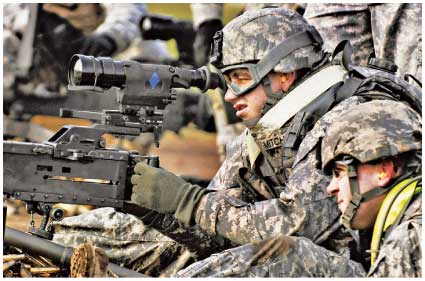 If you were Chairman of the Joint Chiefs of Staff, what would you get people working on?
I would be beefing up intelligence. That’s what is going to win this war. If we can’t find ’em, we can’t kill ’em. The only way we can find them is through intelligence. We need to find more Arab-speaking patriots and American patriots who would like to go into the military. I think that’s where it’s all at. I would also be standing up for myself. In other words, when the media comes up with all their baloney, I would hold a press conference and set the record straight. What happens is that the media goes on their tangents and spins everything, resulting in half-truths and nobody ever comes on TV after that. They never go to the media and correct them, to correct the “spin.” I know that in a lot of cases the media is spinning a lot. For instance, they’re always telling us how many of our guys got killed, but they’ll never mention how many casualties the other side sustained.

Is there anything about the deployment of our forces in the field that you would change?
No, I think we’re doing just fine right now. Afghanistan seems to be getting out of control a bit. We just need to build up a little more. I think the Joint Chiefs have a good grip on everything that’s going on in Iraq. I think they have a good grip on what’s going on, and I think we’re going to start bringing people home by the end of ’08. But we can’t do it prematurely. If we leave too early, the Iraqis, anybody who has helped us, anybody who has even spoken to us, their families, and themselves are going to die. Plain and simple. They’ll be slaughtered. 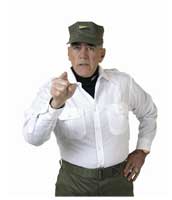 Sometimes when I see or hear about our military losses I think about their training. Are they getting enough training, and the right training?
They are most certainly being trained properly. Let’s just face it. How do you train somebody to survive IEDs—roadside bombs? There’s no way we can go out there and avoid them. Some farmer standing out in a field…or someone who looks like a farmer…he has a cell phone that’s gonna detonate this damn thing as our trucks drive by. There’s no defense against that—except armor. My God, we’re talking about a 500-pound bomb. But I do know that our EOD, which is Explosive Ordnance Disposal, they’re finding about 95 percent of them before they injure anyone. The EODs that I’ve worked with when I’ve been over there have mentioned that they find 10 out of 11 roadside bombs and disarm them before they were able to injure anybody. Our troops, certainly the Marines, I know what their training is. I was just down at the Marine Corps Depot all through December because I do a couple of Toys for Tots events down there each year, and I’ve got to tell you, these troops are as well trained as they were back in my era—better! They are squared away strong! They are taught discipline, they go to the Infantry School after Boot Camp, that’s another three or four weeks. Yes sir, our guys are well trained. Motivation and morale are second to none.

How are our Officers? Are they good?
Our Officer Corps is second to none! They’re just as good, if not better, than when I was in the Marine Corps, and the troops respect their leadership. They’re training well. It’s just that we’re fighting a very evasive enemy over there. It’s something you learn, day by day when you’re over there fighting that type of an enemy. We learn how to find and disarm the IEDs then they adjust accordingly. And then we learn from that and figure another way to do it.

Regarding enlisting, should a young person who can’t go to college, or doesn’t want to go to college, consider the military as a career?
We keep hearing in the media…and the politicians want to tell us all the time…that the only people who go into the military are poor people. And you’ll find as you go and talk to these people—I go down and chat with them when they graduate from recruit training—the majority is from middle, and upper middle class, families. These are people who are patriotic. They’re the young people who want to do something for this country. They realize that the reason they are free is because past young Americans have stood up nose-to-nose with the enemy. That’s the reason why this is a free country today. And God help us if we ever lose that. But I don’t think we will, because these young people are very patriotic. 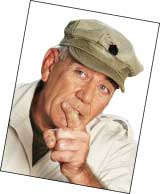 So, you’re thinking that a young man or woman who isn’t exactly sure of what they want to do and what the future holds should give the military a try?
That it’s a viable career? Well, it’s a good career and it pays well. The pay has gone up accordingly and the benefits are second to none. You’ve got medical benefits, financial benefits. When they finish their four years, they can go to college under the GI Bill. There are some huge benefits. Absolutely. But that’s not why these young people are going into the military. They’re going in for the simple reason that they’re patriotic, and they know that their country needs them and that this is a time to step up.

One of our readers asked us: Do recruiting officers tell the truth?
Yes they do. We’ll put it this way: I speak at recruiting schools every December. That’s when they graduate. They do not teach recruiters to pull punches, or tell stories, to get people to join the military. The recruiters are honorable people. They tell it like it is. And these young people they’re talking to know exactly what will be required of them, and they know that chances are they’re going to go over and fight the war. No, these recruiters are not lying to these young people. These young people don’t need to be lied to. When they go to the recruiting office, they don’t go for the benefits that the military will provide. They go because they’re patriotic and they want to keep this country free—and free of terrorists. I don’t know of one recruiter—and I know a lot of them—and I don’t know of a single one who is not extremely honorable. They don’t lie to these young people.

What can you tell us about the U.S. Coast Guard?
If a kid isn’t sure about the other branches, is the Coast Guard a good choice? The Coast Guard is the toughest one to get into. They’re an elite group. It’s an honorable profession. At the recruiter’s office, they have a standing line. They never have a problem with their recruiting goals. Recruiters for the Coast Guard, as far as I’m concerned, have the easiest job. The Coast Guard is small, but very elite.

What about Advanced Training?
Going on to Ranger training, Special Forces, Navy SEALs? These young people are Gung Ho. They’re the ones that really want to pull their share of the load. The schooling is physical, and mental—it’s tough. It’s hard! The Air Force has what they call PJs, very elite. They start out with about 50 people in the class, and they end up with 19 or 20 when they graduate. That’s how tough it is to get through training. The same with the S.E.A.L.s. I don’t think the wash-out rate is nearly as high. But S.E.A.L. training, Oh my God, these young people go through hell every day. And I tell you what, they’ve got the stick-to-it spirit, they’re aggressive, they’re the cream of the crop. The Army has Special Forces, the Green Berets, and it’s very tough training. The Marines has what’s called Recon—Force Recon. If you can make it through that training, you certainly deserve to be proud of yourself. It is tough, plain and simple. Now this is not training they make you do, it’s not training they force you into, it is not even training they try to talk you into. This is training that you volunteer for, simply because you would like to be among the elite. Sniper School is another. Everybody thinks you just have to be a good shot to be a sniper. Well, Sniper school is about 12 weeks long. The wash-out rate is about half. It’s a lonely profession and these guys are right up front. These are all volunteers, in every branch. They want to do it. They come out of the woodwork. So they’re sent to these schools, if they qualify. There are certain requirements that you have to pass before you can be accepted to go to these schools.

When you look back at your now-classic film, Full Metal Jacket, do you think the script was too tough on the sergeant?
Oh, no! Actually I had the authority to make changes. I was able to recommend script changes. And everything I recommended, Stanley Kubrick accepted, and we incorporated it into the script. As far as I’m concerned, it’s the most authentic Marine Corps drill instructor, recruit training, and Vietnam War show we’ve ever looked at. If you ask any man or woman who has ever been in the Marine Corps, they will tell you that when they watch Full Metal Jacket, they feel like standing at attention. Recruit training really hasn’t changed. Marine Corps recruit training remains the same.
—Thanks, Gunny, Semper Fi.