Military Police and Marines from Marine Helicopter Squadron attended the classes and demonstration for their annual training and to hone the sensing abilities of their K-9 military working dogs.

Three military dogs were sent separately to sniff out hidden blocks of Composition 4, also known as C-4, one of the most commonly used explosives. This is training that the K-9’s participate in often to maintain their sense of detection.

“The more we do this, the more efficient the dogs get,” said Cpl. Kelsey Cousino, a military police officer. “Once you stop training them, they lose that sense.”

Aside from their K-9 companions, Marines were trained to identify explosives and the safety precautions they need to take when faced with them.

The purpose of the demonstration was to show the effects of different types of explosives including dynamite, C-4, plastic explosive 4 and detonation cord from even the smallest amounts, explained Staff Sgt. Nate Cosby, the operations chief of EOD.

EOD knows about all the new explosives, said Cousino. When in a deployed status we will be faced with the newest explosives.

This training is meant to give a “better understanding of the dangers associated with IEDs,” said Cosby. “What you see on TV isn’t [always] real.”

The concerns that come with dealing with IEDs not only lie in disposing of them, but also in the ability to detect them.

“Besides understanding what [explosives] do, [Marines] need to be able to detect them so they can take proper safety precautions,” said Cosby.

Cosby also explained how easy it is to make an IED and drop it off almost anywhere.

“You can basically fit 16 blocks of C-4 in a backpack,” Cosby said.

For another demonstration Cosby presented an envelope with an explosive inside known as data sheet. The data sheet is small enough to fit an envelope, but its explosion is almost as large as that of a block of C-4.

“If this ends up on your desk,” said Cosby. “It’s going to be a really bad day.”

Marines were shown, specifically, the blast of each explosive and once the range was clear, were released to view the craters left behind. 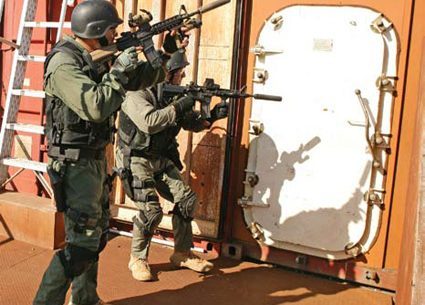