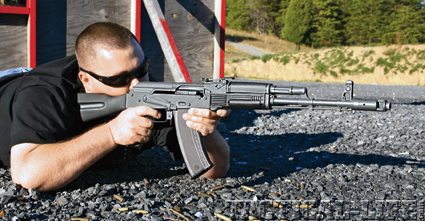 Though revered worldwide, the AK has been left in the dust when it comes to enhancements… until now. Rifle Dynamics takes Kalashnikov’s wood-and-steel design and brings it into the 21st century.

The AR’s Cold War nemesis—AK-47—has until recently been treated as a redheaded stepchild by gunsmiths in the U.S. Right or wrong, the AK is considered a low-end basic weapon, short on accuracy and ergonomics with little available in aftermarket parts/accessories. This is beginning to change with a growing AK appeal in the US developing a clientele capable of supporting gunsmiths willing to devote themselves to the AK’s nuances and working to get the most out of the platform.

Rifle Dynamics
One of the pioneers in this is Jim Fuller’s Rifle Dynamics. The simplicity and reliability of most Soviet-bloc weapons has always impressed Jim, which led him to study the AK system of operation beginning in the early 1990s. Jim believes the AK is the most dependable fighting rifle ever produced, and he’s more concerned with form following function, as all weapons are fighting utensils. The shop offers custom work on ARs, Saiga, PSL rifles, as well as MACs, along with other typical work found in custom shops. Rifle Dynamics is also involved in providing dynamic firearms training along with armorer courses. They have a large selection of belt-fed and select-fire Com-bloc weapons to facilitate orientation demonstrations bringing personnel up to speed on operational use of these weapons.

Overhauled
A trio of Fuller AKs were handled and tested — the full range of what is available from Rifle Dynamics. The first was a 7.62x39mm AK-47, built from a Romanian parts kit. The receiver used is an Elk River Tool and Die 1mm receiver. An Arsenal single-stage trigger group was installed. K-VAR U.S. handguard and pistol grip were combined with a coveted AK 100 series folding stock. Overall length of the chrome-lined barrel with pinned flash hider is 16 inches. The AK-47 benefits from a custom Rifle Dynamics front end consisting of a Bolten gas block and Wolverine flash hider both manufactured by Venom Tactical. The Bolten gas block combines the front sight and gas block into one unit, which allows for a shorter barrel length; pinning flash hider permanently to the barrel gives the rifle a whole new feel when shooting and moving. The purpose of this front end modification is to lighten the front end which shifts the guns center of balance closer to the body, making it much more controllable in movement and makes the gun as short as it can legally be without an SBR tax stamp. An Ultimak forward scope rail compliments the front-end work. The Ultimak provides a solid mount for whatever forward mounted optic you prefer. The finish on this gun is Norrell’s Moly Resin (grayish/green) applied over fresh Parkerizing. Rifle Dynamics has found this to be the best finish for a rifle that will take a lot of abuse, heat and lack of cleaning. Jim reports the finish has proven itself many times over under the worst conditions. 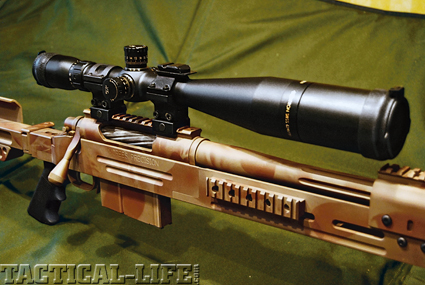 Though revered worldwide, the AK has been left in the dust when it comes…