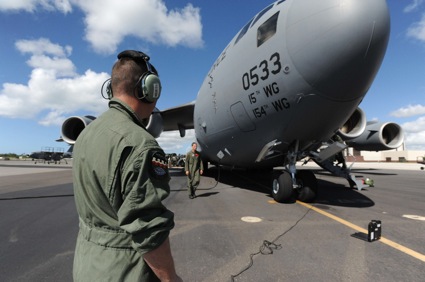 Tech. Sgt. Andrew Dunn, 15th Aircraft Maintenance Squadron crew chief, conducts a pre-flight maintenance inspection before departing on a humanitarian mission to Japan Mar. 12 at Joint Base Pearl Harbor-Hickam, Hawaii. The plane will visit various Air Force bases in Japan during its mission to to provide support for Japan relief efforts in the wake of tsunami and earthquake damage there. (U.S. Air Force photo by Staff Sgt. Nathan Allen)

The team of approximately 25 Airmen from a variety of Air Force specialties, traveled to Yokota Air Base, Japan, where they will provide support to efforts underway to support the government of Japan.

The aircraft also was loaded with several generators, which will be used in the support efforts.

“First and foremost our prayers are with Japan,” said Brig. Gen. Scott West, the 13th Air Force vice commander, who departed with the team. “They are resilient and capable. (But) we’ll be there so long as our allies ask us to.”

Lt. Col. Rocky Favorito, the commander of the 374th Communications Squadron at Yokota AB, was on temporary duty at Joint Base Hickam when the 8.9 magnitude earthquake and resulting tsunami struck. He returned to Yokota AB with the C-17 team, excited to get home and help.

“Today I’m proud to be in the U.S. Air Force,” Colonel Favorito said.

The colonel said that his squadron had just completed an exercise, so they were ready for the real-world response.

Such enthusiasm to help the Japanese people was shared by all the Airmen onboard the aircraft.