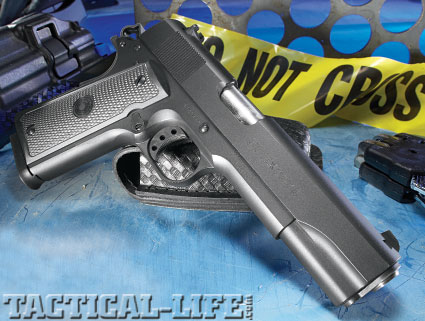 Having a reputation hardened by decades of military service, there are many LE agencies that still depend on the 1911. In a world where many new to a uniform are just beginning to know the 1911, these freshmen find themselves choosing between numerous custom production pistols that loosely resemble the original and a budget-minded compromise. Representing everything that gave the 1911 its reputation is the new .45ACP GI Expert.

Going back to basics, Para’s GI Expert is an entry level 1911. Like the original, it favors right-handed shooters with the traditional low-profile thumb safety, slide lock lever and magazine release. Vertical serrations are only present at the rear of the slide’s slabs and the sights are the standard fixed three-dots. Even the simple black polymer grips are lackluster, featuring the Para USA logo. It looks and feels like a combat pistol.

What is included doesn’t stand out in appearance. The three-hole polymer trigger on our pistol breaks predictably after 3.5 pounds of pressure without creep. It’s one of the biggest contributing factors to the positive reception from our test group of sheriff deputies.

The grip
safety is subtly contoured for the hammer but not too large. A lightweight skeletonized hammer strikes the firing pin reliably and an empty 8-round magazine drops onto a protective polymer bumper. The barrel fit is superb with the appropriate size barrel link, proper lug engagement and the correct relationship between the chamber and frame. The ejection port is lowered and flared for reliable ejection. With a frame and slide made of carbon steel and finished in Covert Black Para Kote, this pistol is a modern reflection of what many argue a 1911 should be.

Range Time
Right out of the box, I performed a limited technical inspection of the GI Expert and observed light scratches on the barrel hood and some wear on the controls and around the muzzle. Evidence suggests that my test sample had “fired a few shots.” What’s nice about this is that I didn’t need to worry about issues that people commonly blame on a firearm’s break-in.

Gathering a number of partial boxes, the deputies and I dumped leftover .45ACP cartridges into a single plastic bag. It’s a little unorthodox (and a tad bit abusive) for a test but it would reveal whether variations in pressures, bullet weights and types would interrupt the Para’s operation. What was in the bag? We found truncated bullets, ball, Hydra-Shoks, Golden Sabers, a few Silvertips and some questionable reloads. With a handful of 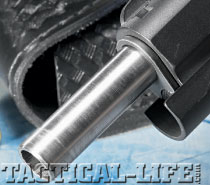 surprises, I began stuffing the magazine. I gave the honor of firing the first shot to a deputy who shot at a few steel plates on a target rack 15 yards away. Watching the pistol, the slide’s return was noticeably different from shot to shot. I stepped up and continued the cycle. When the bag was empty, we had fired every shot without finding a squib load or experiencing any type of malfunction.

Moving on to accuracy, we put up Caldwell’s Orange Peel 12-inch bull’s-eye target for visual confirmation of hits 25 yards away. Loading a magazine with just 5 rounds of Winchester WinClean 185-grain cartridges, accuracy testing commenced from a Caldwell Pistolero handgun rest on a bench. Five rounds clustered together with the center measuring just 0.50 of an inch to the right of center. The WinClean earned praise in its ability to punch perfect circles in the target for easy identification. The best group measured a very impressive 1.75 inches center-to-center and held an average of 2.75 inches after a 5-shot group. One aspect that went unappreciated during testing of the Winchester ammunition was the controllability. Follow-up shots were fast and accurate.

Loaded with Federal’s 230-grain Law Enforcement Tactical HST, it took just one shot to realize this was a defense load. Steadily recovering after each shot, I was even more surprised to see the best group of the day result from the first 5-shot group fired with the Federal ammunition. The bullets were not kind to the paper as they ripped through the very center of the target and measured just 1.56 inches, a group rarely seen in testing service pistols. Four targets later, the group average had grown to a respectable 2.51 inches. 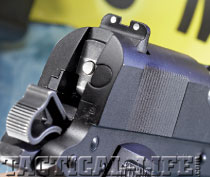 The GI Expert’s sights are easy to find during recovery between shots and plain to see. Some deputies noted valid concerns about snagging the rear sight on their uniform. The sights are not staked and the dovetail cuts in the slide make it easy to find and swap in a set of low profile or night sights with the right sight tool. After clearing the holster, presentation was natural for some but a little unusual for those who had only carried a Glock for duty. Unlike so many new introductions in the firearms industry, finding a specific type of holster or thigh rig for the GI Expert is easy.

During a thorough evaluation on the range, the only malfunction we experienced was with a slotted grip screw that backed out on occasion and became noticeably loose in the grip while shooting defensive ammunition. We should have used some Loctite on the threads and put the aggravation to rest. Lesson learned.

The GI Expert isn’t an attempt by Para USA to duplicate the service pistols used in both World Wars, Korea and Vietnam. It is a high value 1911 ready for general issue that’s absent of the overdressed features found on so many “custom” guns. There’s no rail to dangle accessories from under the dust cover and nothing is too tight to cause functioning issues in filthy environments. This Para is fit for dependable service and has what it takes to help obtain an expert badge on qualification day or decisively preserve a life in the line of duty.

Having a reputation hardened by decades of military service, there are many LE agencies…