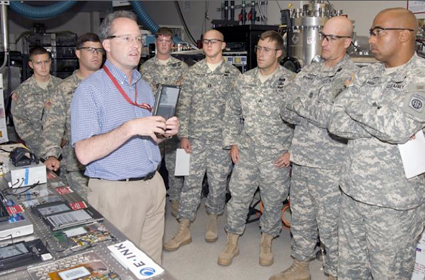 ADELPHI, Md. (July 20, 2009) — It can be a long road from the laboratory to the battlefield, but the Army is forging a more direct path.

Thanks to a U.S. Army Research Development and Engineering program, experienced combat Soldiers get direct access into Army labs to give scientists and engineers face-to-face feedback about the equipment they have and the capabilities they need.

About a dozen 82nd Airborne Division paratroopers are visiting RDECOM labs across the country on a two-week tour as part of a larger initiative to bring a Soldiers’ battlefield perspective directly to researchers.

“It’s important to bring their knowledge into the lab and get their concerns,” said Sgt. Maj. Steve Hornbach, the Army Research Laboratory’s senior enlisted Soldier. “It also gives them knowledge about ARL that they can take back to their units.”

The Soldiers visited ARL’s Adelphi and Aberdeen Proving Ground labs July 13 and 14. Researchers at ARL provide cutting-edge science, technology and analyses and are the leaders in providing innovative solutions for the current and future Soldier.

“Joe on the line doesn’t realize there’s a guy on a computer in an office trying to keep him alive and help kill the enemy,” said the veteran of four Operation Iraqi Freedom deployments in the last six years.

“It’s important what they’re (ARL scientists) doing to help come up with ideas and funnel ideas out to the Army,” said Spooner.

One idea ARL is working on to make information more manageable on the battlefield is flexible electronic displays that are bendable, durable and can be read in any light.

Staff Sgt. Terry Clements, Troop B, 1/73 Cav., an OIF veteran, said the displays along with the power supply research were the most impressive things he saw at ARL.

“Me being a (cavalry) scout, I’m hiding in a wood line using a (laptop computer), so anything that’s smaller will help us out a lot,” said Clements.

As the troops were shuttled to multiple briefings and shown about a dozen other technologies, ARL scientists and leadership made it clear that they were only here to support Warfighters.

“If we’re not helping you-then why the hell do you need us?” asked John Eicke, an ARL signal and image processing research chief, after he welcomed the Soldiers.

Eicke and others from his division briefed the troops on sensor and surveillance equipment ARL developed for current combat operations as well as some advancements that will be fielded soon.

“We want to try to be relevant with what we do,” Eicke told the Soldiers.
For many of the troops, some with multiple deployments under their belts, touring ARL was an eye-opening experience.

“It’s amazing there’s so many Ph.D.s working behind what a Solider does every day,” said Capt. Michael Hamilton, 18th Fires Brigade.

More than a third of ARL’s scientific staff has a doctorate degree, and about 65 percent of the 1,300 hold master’s and doctorate degrees. Despite having highly educated and skilled scientists, they still must learn from the average troop in the field.

“We want Soldiers’ feedback before production,” said Jill Smith, director of the Weapons and Materials Research Directorate, which is responsible for leading the Army’s research to enhance the lethality and survivability of the individual Soldier and advanced weapon systems.

After a short brief about the directorate, she led her research staff and the Soldiers in a two-hour-long conversation that allowed them to exchange ideas and experiences about armor, weapons systems and ammunition.

The Soldiers freely gave their opinions about their Army gear and also gave their unique perspectives as paratroopers, who have to enter a war zone with only the equipment they can carry on their backs.

“This give and take (of information) is a good thing,” said Dave Kleponis, a mechanical engineer researcher, during the discussion.

“We have to figure out how we develop armor for a special mission but we have to also develop it for different threats,” he explained to the Soldiers after multiple questions asked about body and vehicle armor.

Other paratroopers echoed Billman’s sentiment and expressed appreciation for what ARL is doing for them.

“Once you’re here you realize what a great opportunity this is to talk to these people,” said Sgt. Steven Martin, Troop A, 1/73 Cav. “Sometimes we don’t realize how much thought went on behind our (equipment).” 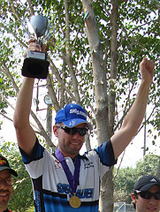