WASHINGTON, Aug. 11, 2009 – The Taliban will not win the war in Afghanistan, the commander of NATO and U.S. forces there said in Kabul today.

“We will win. The Taliban won’t win,” Army Gen. Stanley A. McChrystal said during an interview on National Public Radio’s “Morning Edition.”

Still, he acknowledged, the struggle against the Taliban and their al-Qaida allies will be long and hard, with good and bad days, good and bad months, and the tragedy of civilian and coalition casualties.

The International Security Assistance Force is facing an aggressive enemy, NATO officials in Kabul said. The Taliban are employing complex tactics, and are gaining momentum in some parts of Afghanistan. “However, in those areas and others, insurgents face their own problems in terms of public support, cohesiveness and their ability to sustain their morale and fighting capacity,” said Air Force Lt. Col. Tadd Sholtis, an ISAF spokesman.

The insurgents have achieved some momentum in recent years in southern and eastern Afghanistan. But recent ISAF operations in Helmand province have reversed some of these gains, officials said. Northern and western Afghanistan and the area around the capital of Kabul are relatively stable, he added.

“The fact that we’ve witnessed recent attacks in those areas underscores the fact that we cannot adopt a static approach to counterinsurgency operations against an adaptive enemy,” Sholtis said. “We need to partner with the Afghan government to reinforce success in the areas we hold in order to build lasting foundations for stability. But we also need to be able to help the developing Afghan national security forces establish control of contested areas.”

Patience is needed, as the effort in Afghanistan will take years, and one key to it is growing the Afghan security forces, McChrystal said. “This is a job that takes not only resolve, it takes patience and courage – it takes military and political courage to do this,” he said.

The effort in Afghanistan will not be won by military force alone, and certainly won’t be over by taking an enemy capital, the general noted. “You are actually fighting to convince people to support their government,” he explained.

Afghan forces are key to the effort. Commanders in Regional Command South, an area of intense effort against the Taliban, want more Afghan soldiers. American, British and Danish forces are fighting alongside Afghan soldiers and believe they are doing well, McChrystal said.

The general also told NPR that he will delay the strategic assessment he’s conducting for Defense Secretary Robert M. Gates until after Afghanistan’s Aug. 20 national election. “I asked to delay that so that I’d be informed of what happened in the elections, because I thought it was such a data point,” he said. “My overall read of the situation here would be much better if I could have that in the rear view mirror to look at.”

McChrystal also said he will look at areas where insurgents are setting up, or attempting to set up, shadow governments. Other “data points” include levels of violence, the growth of Afghan security forces, support for governance, the number of children in school, commerce and so on. “It’s extraordinarily complex to try to put together a clear picture,” the general said. 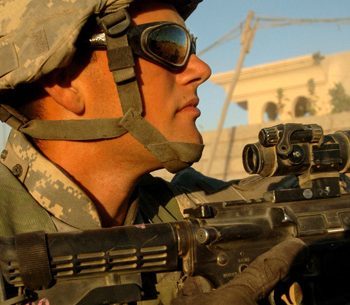