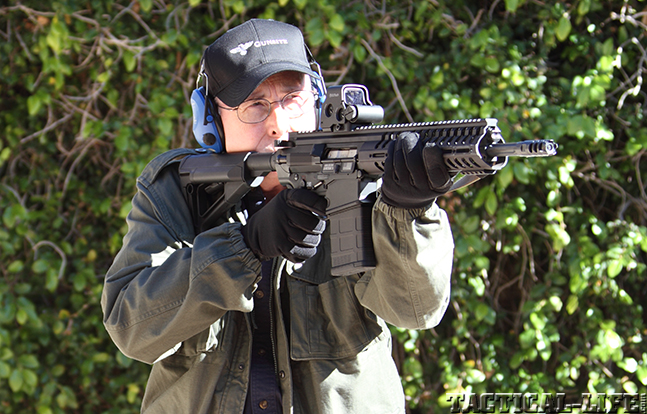 When the AR-15 was adopted by the U.S. government as the M16 and introduced to combat troops in Vietnam in the mid-1960s, some of our soldiers were killed or seriously wounded because a cartridge would become stuck in the chamber, making the gun unusable. Eventually, many of the flaws that caused this were remedied and the M16 became a much more reliable weapon, but the basic direct gas impingement operating system and its associated extraction problems are still the subject of criticism by some.

About a decade ago, Patriot Ordnance Factory (POF) replaced the direct impingement system with a short-stroke gas piston system. Through the years, POF has made other modifications to improve the original design, but the most recent change, called the E2 Extraction Technology system, promises to make extraction and ejection even more reliable. It is part of a new package of features on the recently introduced Generation 4 version of POF guns that are chambered for 7.62mm NATO, 5.56mm NATO and a few other cartridges. I recently received a P308 chambered in 7.62mm NATO for testing.

cutting four grooves into the neck of the chamber parallel to the bore, expanding gas is directed between the neck of the cartridge and the chamber wall. The effect is to peel the case away from the chamber just enough to make extraction easier. Case necks exhibit four lines of carbon, but they do not affect the ability of the brass to be reloaded and are easily cleaned off.

Although the E2 feature is the latest improvement to come out of POF, several others have preceded it. The most obvious of course is POF’s gas piston system. Unlike some other piston systems, the POF version has no springs that are adversely affected by heat. The piston shaft or connecting rod is chrome-plated for hardness and ease of cleaning, while the actual piston is a nitride-finished cylindrical slug that sits between the connecting rod and the easily operated, nitride-heat-treated, FAL-type gas valve. The valve has a position for normal operation, one that delivers less gas to the system for use with a suppressor or silencer, and a cut-off position that requires the action to be cycled by hand. The cut-off position is for special situations when it is not desirable to eject brass that might reveal the shooter’s position or leave telltale evidence of his or her presence. It is also useful when using a suppressor and the operator wants to eliminate the sound of the action cycling.

Another improvement developed by POF is the roller bolt cam pin that greatly reduces wear to the inside of the upper receiver caused by the rectangular head on the typical cam pin. The bolt carrier is plated with NP3, which is a surface finish treatment offered only by Robar, a firm that specializes in metal finishes for firearms. NP3 is a nickel/phosphorus plating that is very hard, durable and, because of the polytetrafluoroethylene (i.e., Teflon) mixed into it, reduces friction. It is actually self-lubricating, and fouling doesn’t stick to it very well, so the bolt carrier can be cleaned with a dry cloth. The amount of lubricant required is also greatly reduced.

The bolt, instead of being finished in manganese phosphate, is chrome-plated, making it very hard, wear resistant and easy to clean. Fouling just can’t get a good hold on it.

When the flattop version of the M16 was developed by removing the carry handle, the upper receiver was weakened considerably. Then, when the MIL-STD-1913 rail was added, which required that slots be milled into the receiver, it further reduced the strength. In fact, it became so weak that a wooden lead pencil could be driven through the top of the prototype. To remedy this, the thickness of the top of the mil-spec upper receiver was increased, but the receiver was still not as strong and rigid as a gun with a carry handle.

To replace this lost strength, POF increased the thickness of the top of the receiver and created a Modular Railed Receiver (MRR) handguard with a MIL-STD-1913 rail that extends rearward and slides onto the receiver, creating an uninterrupted rail running from the back of the receiver to the front of the handguard. The handguard and rail are then bolted in place and provide a great deal of room for iron sights and tandem optics like a day scope and night-vision adapter. Because the entire rail is one piece, everything mounted to it is in the same optical plane. The rail also has removable sections that permit a scope to be mounted closer to the bore without the scope’s objective bell hitting the rail.

The MRR is made of aluminum and has a smooth contour except for the Picatinny rail along the top. However, there are numerous attachment points at the 3, 6 and 9 o’clock positions for five-, 12- or 17-slot sections of rail to which can be attached any number of accessories like bipods, tactical lights, lasers or vertical foregrips. The shooter can put rails only where desired and leave the rest of the MRR smooth so it is comfortable to grip.

When the M4 version of the AR-15 was developed, it was found that cartridges would sometimes get hung up on the feed ramp and cause a stoppage. To remedy this, so-called M4 feed ramps were cut into the upper receiver. POF solved the problem by cutting a radius between both the left and right feed ramps that removed a great deal of the hump in the middle. POF refers to it as a “1911-style” feed ramp. It worked fine on the test gun and is a simple solution.

A criticism often leveled at the AR-15 is that, although the gun is designed with ergonomics in mind, it is not ambidextrous and requires that hands be moved from their firing positions in order to perform certain functions like locking back or releasing the bolt. That criticism does not apply to the latest POF guns.

On the new Gen 4 lower receiver a button located in front of the trigger and inside the triggerguard can be pushed up with the trigger finger while the charging handle is pulled to the rear. This locks the bolt back. And just like the Gen 3 version, to release the bolt, the bolt release paddle on the left side of the receiver can be depressed or a button located on the right side of the receiver just to the rear and above the magazine release can be pushed with the trigger finger while maintaining a right-handed firing grip.

The P308 is supplied with a 20-round Magpul PMag, but another Gen 4 improvement is the ambidextrous magazine release consisting of a button on each side of the receiver that can be activated with the trigger finger by either a left- or right-handed shooter. And to rest the trigger finger when it is not busy, the Gen 4 version features a groove at the back of the magazine well and in front of the trigger. Previous versions as well as the new Gen 4 version have eliminated the swing-away winter triggerguard and replaced it with a permanent one that is bowed downward and provides plenty of room for a gloved finger while increasing the strength of the lower receiver. The safety selector on POF rifles is also ambidextrous.

“With the shorter barrel, this gun is a good candidate for work in confined spaces like those encountered in structure clearing.”

POF uses high-quality finishes and parts in its guns. The barrel of the P308 is available in a variety of lengths out to 20 inches, and is button-rifled with a 1-in-10-inch twist rate and then hand-lapped for accuracy. It and the huge heat-sink barrel nut are fluted to increase the cooling surface area and make the barrel stiffer compared to a barrel of the same weight. The barrel is made of 4150 chrome-moly-vanadium steel that is hardened and then salt-bath-nitride treated, making it harder and more corrosion resistant than hard chrome plating. The muzzle is crowned, and a very effective, triple-ported POF muzzle brake is attached.

Both the upper and lower receivers are machined from 7075-T6 aircraft-grade aluminum billets and then either hardcoat anodized black, olive drab Cerakoted or coated with Robar’s NP3. The trigger is a drop-in unit with a 4.5-pound, single-stage pull that is crisp and enhances accuracy.

The P308’s furniture consists of a Magpul MOE pistol grip and a Magpul STR seven-position-adjustable stock. The stock rides on a receiver extension that has a tab at the front that is slotted and captures the buffer retaining pin, locking the tube in place so that it cannot rotate in the unlikely event the castle nut becomes loose. Because the tab or lip extends under the back of the bolt carrier group when the gun is in battery, the tail cannot tip down at the beginning of its rearward journey and carrier tilt is eliminated. It’s pretty ingenious.

My test P308 was equipped with a 14.5-inch barrel with a permanently attached muzzle brake to bring the overall barrel length beyond the minimum 16 inches required by the BATFE for a non-regulated rifle. So, while it may give up some energy at longer ranges, it is very effective at ranges within 500 yards. It was accurate, too. Using a Schmidt & Bender 3-12x50mm PMII scope, the gun printed groups of about 1.5 inches at 100 yards. That’s fine performance. And during the evaluation, whether testing its accuracy from the bench or using an EOTech XPS3 holographic weapon sight for tactical drills, there were no malfunctions of any kind. With the shorter barrel, this gun is a good candidate for work in confined spaces like those encountered in structure clearing. And the muzzle brake was very effective at reducing felt recoil and muzzle rise, making quick follow-up shots that much faster.

POF guns are building a loyal following because of innovation in design and quality of construction. And Patriot Ordnance Factory keeps thinking of ways to improve them. There’s no telling what will come out of the factory next. 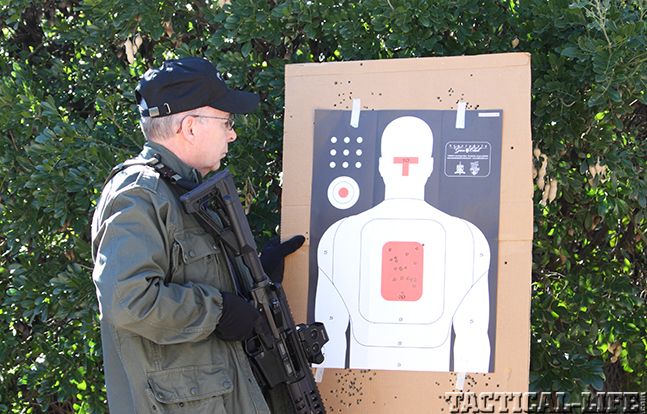 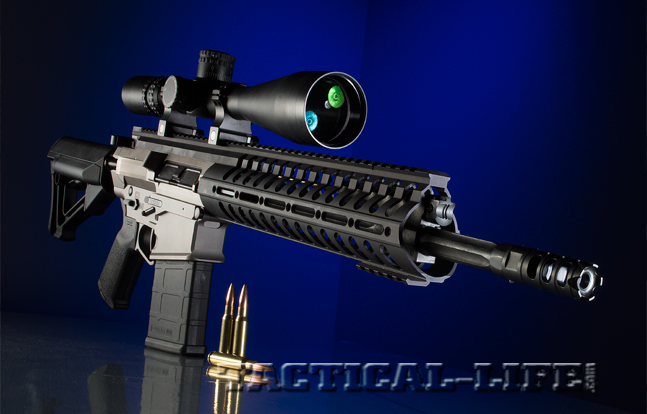 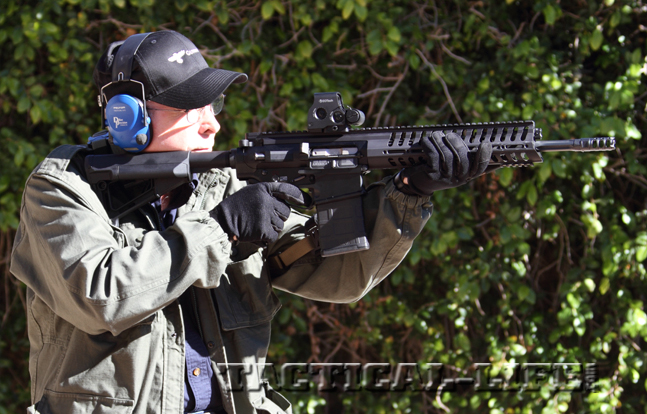 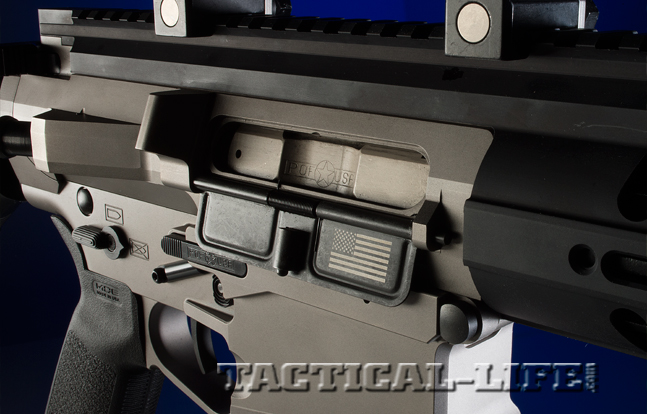 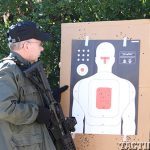 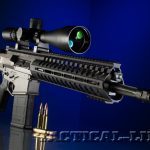 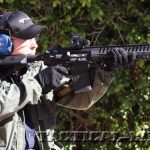 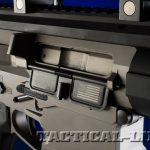 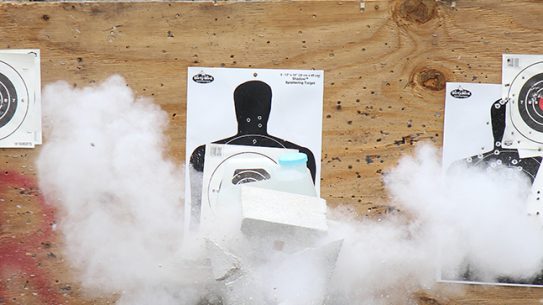 These barrier-busting bullets pack the power to turn cover into concealment.