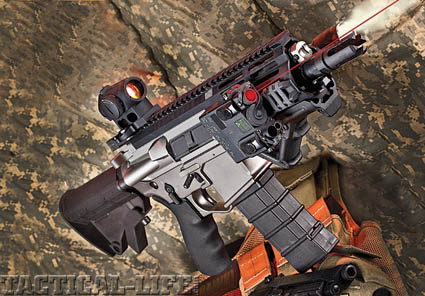 POF-USA or Patriot Ordnance Factory, continues to set new standards of innovation in carbines for tactical use. Anyone who has ever had to clear a building or exit a cruiser knows that within the bounds of reliability and accuracy, shorter is better. POF-USA manufactures some of the most reliable short-barreled carbines on the planet. The subject of our current evaluation is POF’s LE/Military Only P415-7 MRR (Modular Railed Receiver) Carbine. Like all POF rifles and carbines, the P415-7 sets new standards of reliability for the venerable AR platform. 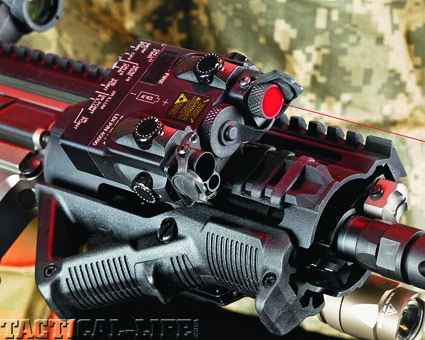 P415-7’s forend mounting rails allow the use of accessories such as this Laser Devices DBAL-A2.

POF AR-type rifles are truly unlike any other. Externally, the most obvious difference between the P415 and others is the patented Predator upper receiver that not only features an uninterrupted full-length Mil-Std-1913 top rail and rails at the handguard sides and bottom, but also free floats the barrel, enabling mounting accessories without affecting the rifle’s zero. Our P415 came with a 7.25-inch barrel, but is also available in longer lengths up to 18 inches. The P415 nitrate casehardened, “5R” barrel is fluted along its length for rigidity, and heat dissipation. The flutes offer a greater surface area, so heat is more rapidly dispersed that with standard heavy barrels. Flutes also stiffen the barrel and improve accuracy by reducing barrel vibration as the rifle is fired.

The test carbine also came equipped with a Vortex flash suppressor, one of the most effective devices available. Fit and finish of the P415 are excellent. I was particularly impressed with the mating of upper and lower receivers with absolutely no “play” whatsoever. Like every POF firearm I have evaluated, this POF P415 is one of the best-assembled AR-type rifles I have ever seen.

One of the major differences between the P415 and any other is the patented gas system that eliminates the inherent problems associated with Stoner’s original design. The original AR direct impingement gas system not only blows large amounts of fouling and particulate matter back into the receiver, but also causes excessive heat to be transferred to the receiver area in rapid semi-automatic or full-automatic fire. There have been attempts to solve the AR’s gas system problems in the past, but POF is the best one I have seen. The P415 gas system consists of a regulated (normal and suppressed modes) gas cylinder plug, a 6-inch chrome-lined gas cylinder with a chrome-plated stainless steel piston and operating rod that impinges against a reinforced bolt carrier key. Unlike some other “op rod” systems, there are no springs on the Predator rod. Heat from sustained firing may damage springs that surround op rods that are in close proximity to the barrel. This is especially true in select-fire rifles. The P415 gas system is self-regulating.

The P415 system can be easily and quickly disassembled by simply pressing in on the gas cylinder plug button while rotating the plug clockwise. Once the plug is removed, the piston and operating rod fall out when the muzzle is pointed down. Reassembly is accomplished by simply dropping the rod back into the gas cylinder with the muzzle pointed up. If it doesn’t fall into place, all that is necessary is to shake the upper receiver — the rod will fall. The piston is replaced with the gas rings forward. The plug fits only one way and cannot be incorrectly reassembled. All that is necessary is to push the plug into place, press the locking button and rotate the plug counterclockwise. 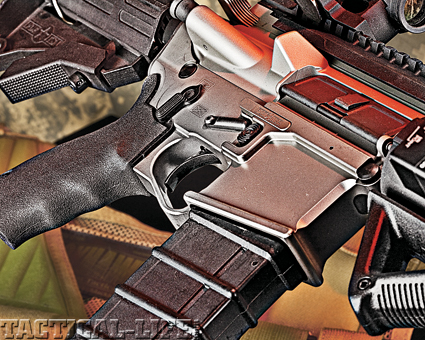 The upper and lower receivers of the P415-7 feature a self-lubricating NP3 Nickel Teflon coating.

While conventional AR receivers fill with fouling and particulate matter after a few rounds, the P415 remains clean even after extensive firing. There is no carbon fouling or caked carbon to be found on the bolt or in the bolt carrier recesses. In short, the P415 is much easier and simpler to maintain than any AR-type rifle with the usual direct impingement system. The P415 gas system is a really significant step forward in AR design. While several military and law enforcement users have shot their P415s thousands of rounds without cleaning, prudence dictates that any rifle should get a periodic scrub. In the case of the P415, all that is necessary is to wipe the receiver’s interior, bolt carrier and bolt with a dry shop towel to remove any fouling. Nothing sticks to the hard chrome-plated bolt/bolt carrier, upper and lower receiver’s NP3 grey finish, a self-lubricating nickel-teflon plating. Also, the gas system should be periodically disassembled and cleaned, since it takes the brunt of hot gases from the barrel. Any carbon buildup in the gas system can be removed with a scrub pad. 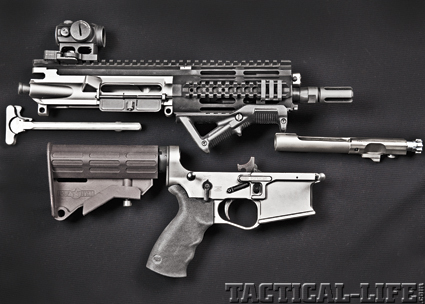 Removing the regulated gas plug from the front of the gas block accesses the P415-7’s gas system. The piston and op rod can then be removed by simply tipping the muzzle down.

But the improved gas system isn’t the end of the story with the P415. The component parts that allow the P415-7 to operate without lubrication are the chrome-plated bolt, gas piston, NP3-plated roller cam pin, bolt carrier, regulated gas plug, on the upper and lower receiver’s interior and on the charging handle. The bolt carrier has been modified for increased reliability and accuracy. The bolt carrier surfaces that ride on the upper receiver are somewhat larger than conventional ones, while maintaining recesses to accommodate what little fouling might accumulate. The chamber, barrel locking lugs and bolt carrier interior are also chrome plated, which enhances reliability. As a top-end AR-type rifle, the P415 has virtually all the options to make the rifle as close to perfection as possible. My test carbine had a 2-stage Accuracy Speaks match trigger that broke precisely at 3.5 pounds with zero creep or backlash. 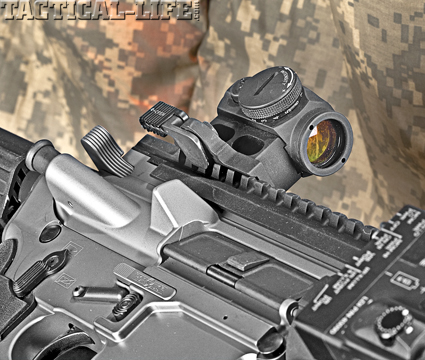 I installed an Aimpoint Micro T-1 red dot optic on my test P415. This smallest Aimpoint gives up nothing for its reduced size. The parallax free four MOA red dot is adjustable over eight day settings with one extra bright for use with laser protective glasses or in bright desert sun. There are four night vision compatible settings and the Micro T-1 is fully compatible with all generations of night vision devices (NVD). The Micro T-1 tips the scales at only 3.7 ounces and is just 2.4 inches in overall length, so there is plenty of room for the latest generation NVDs that mount ahead of the day optic on a full-length rail, even a short one like that on our test P415. The advantages of mounting a NVD ahead of the day optic not only include eye relief issues, but allow the NVD to be used in conjunction with the optic’s day reticle. The Micro T-1 attaches to a MIL-STD-1913 rail via standard QD mounts like the LaRue Tactical QD mount that came with our Micro T-1. The Micro T-1 meets full MIL-SPEC for water resistance, being waterproof to 80 feet (25 meters).

For clearing, high intensity white lights are the norm and I added a SureFire 110- lumen M300A “Scout” WeaponLight to the left side rail of my POF P415, attaching it so that my weak hand thumb could activate it without removing my hand from the forend. The Scout is so bright that it will flash blind anyone who looks directly into the beam. The light beam has a highly focused central spot and a wider “halo” enabling the user to focus on targets or see adjacent objects without shifting the weapon from one side to the other. Battery life of the Scout is over an hour and the light is waterproof to 22 meters – full mil-spec. 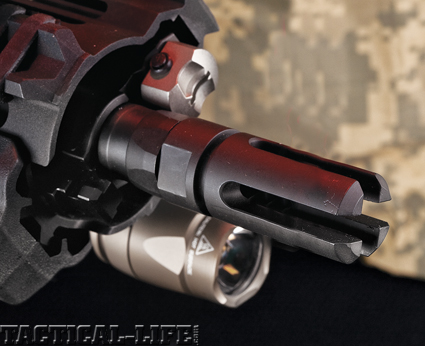 The P415-7 comes equipped with a Vortex flash suppressor, one of the most effective muzzle devices available.

Shooting the P415 was a revealing experience – one that showed just how different this new carbine is from conventional AR-type rifles. The carbine was notably accurate using the “red dot” Aimpoint that basically covered the bullseye at our 100- yard test distance. As such, the carbine easily can achieve “head shots” at 100 yards using the Aimpoint. Shot groups with Black Hills 77-grain Match ammo, identical to the military Mk262, Mod 0, averaged an inch. Not bad for a 7.25-inch barreled carbine. Functioning was flawless. This carbine’s operation was also much smoother than I usually expect from AR-type rifles, attributable to the regulated gas piston operating system. Felt recoil was also minimized, along with muzzle rise, enabling quick recovery and follow-up between shots.

POF’s P415 breaks new ground in the world of AR-type rifles that are otherwise so similar that even experts cannot tell the difference between one and another without close inspection. The POF innovative “gas piston/op rod” significantly advances the “state-of-the-art” in AR-type firearms and not only adds flexibility to the overall system, but improves both reliability and maintainability over any of its convention-al competitors. No gas operated rifle is totally maintenance free, but the POF P415 is about as close as it comes. The P415’s innovations are among the most significant developments in AR type rifles since they were originally designed over 40 years ago. 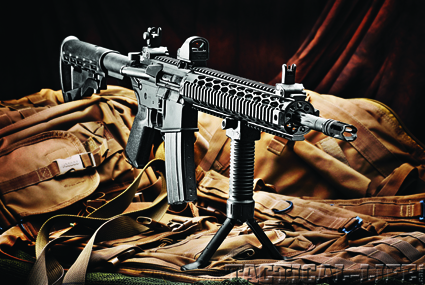