by Massad Ayoob
in Guns, Shotguns
0

0
SHARES
76
VIEWS
Share on FacebookShare on Twitter
Shotguns and AR-platform rifles have their strengths and weaknesses. Luckily, many agencies have the foresight to equip their officers with both so officers can adapt as missions require

For the last several years, first at the American Society of Law Enforcement Trainers (ASLET) and more recently at the International Law Enforcement Educators and Trainers Association (ILEETA), I’ve moderated a panel of experts’ discussion on firearms and lethal-force training issues. One of the most common questions that used to come up was, “Patrol rifle or shotgun?” Today, with the ascendance of the semi-auto 5.56mm rifles in our patrol vehicles, we’re more often getting the question, “Is there a place for the patrol rifle and the shotgun?

The answer to both is often simply, “Yes.”

Each of us bring different experiences to the table, and our experiences help to shape our opinions. My first patrol car, a 1972 Dodge Polara, had a Winchester Model 12 shotgun loaded with the traditional 12-gauge, 2¾-inch buckshot shells racked upright on its dashboard in a Lecco Lock. Old even then, that classic Winchester was still a reliable pump gun. In later years, I would ride with department-issue shotguns of increasing modernity: the Ithaca Model 37, the semi-auto Benelli Super 90, the semi-auto Mossberg Jungle Gun with a folding stock, and with the department I serve today, a Remington Model 870 with a 14-inch barrel tuned by Scattergun Technologies. 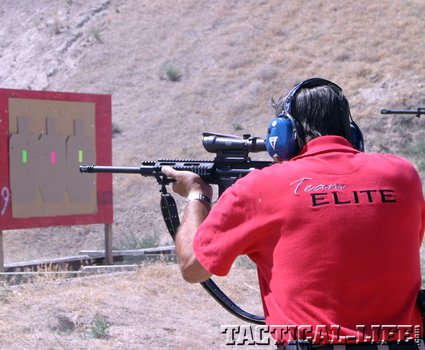 Very fast to employ and extremely powerful, an AR-platform rifle has one very distinct advantage over the simple, tried-and-true shotgun – engaging targets at greater distances

Rifles were not part of the armory of the department I served in the 1970s. As for the agency I joined in the 1980s, rifles were “privately owned, department approved” and depending on the assignment, I had everything in the car from a scoped, semi-auto Winchester Model 100 Sporter in .308 to an HK91 in the same caliber, and sometimes even a Steyr precision rifle. That particular community’s local government was not ready for high-powered patrol rifles as standard-issue, but it was around that time when pistol-caliber carbines were coming into vogue. As the lead firearms instructor, I was able to get an HK94 9mm carbine in every patrol vehicle to augment the standard-issue Ithaca Model 37 pump-action shotguns.