WASHINGTON, Aug. 12, 2009 – Defense Department officials are developing a new training program that will teach military members and civilians how to be culturally competent and aware when interacting with people from different lands, a senior official told reporters here today.

Cross-cultural competence is “something that we want to bring to the department as a critical piece of training that we think needs to be incorporated into our overall training establishment,” Gail H. McGinn, deputy undersecretary of defense for plans, said during an interview with Pentagon Channel and American Forces Press Service reporters.

Among her many responsibilities, which include performing the duties of the undersecretary of defense for personnel and readiness, McGinn also is the senior language authority for the Office of the Secretary of Defense. She is responsible for improving foreign language capability within the department and also oversees policy development for the diversity and equal opportunity programs.

Since U.S. military forces conduct missions worldwide, McGinn said, they should “understand the cultural nuances of areas into which they are going to be deployed.”

And as the U.S. population becomes increasingly diverse, it’s also useful for military members to be culturally aware so they can better understand comrades in the ranks from different cultural backgrounds, she added.

Cross-cultural competence training “is basically equipping people with the skills to understand what culture is, how people use culture, how they interact with each other within their culture,” McGinn explained, “so that wherever they are – deployed in the world or with host populations or with our allies – that we understand that people operate differently based upon the cultural background they come from.”

Military and civilian personnel who’ve been cross-culturally trained should be more effective in different cultural environments, McGinn pointed out. And that, she said, contributes toward mission success.

The department sponsored a symposium, “The Role of Cross-Cultural Competence in Organizational and Mission Success,” June 30 and July 1 at the Defense Equal Opportunity Management Institute at Patrick Air Force Base, Fla., McGinn said. Participants discussed the best way to integrate cross-cultural competence curriculum into the military’s existing training and education system.

The institute also serves as the coordinating agency for the Defense Language Office to ensure synchronicity among all services with respect to cross-cultural training.

Learning another language can become a window into the culture of a foreign people, Navy Adm. Mike Mullen, chairman of the Joint Chiefs of Staff, said during his Aug. 10 visit to the Defense Language Institute in Monterey, Calif. And as U.S. servicemembers continue to conduct missions in Afghanistan and Iraq, the institute’s language courses “are as important as any undertaking that we have in the United States military right now,” he added.

“It is really important that we listen to other people, that we listen to other cultures, that we pay attention to how they see their problems,” Mullen said. “I call that seeing it through their eyes – putting yourself in a position that actually focuses on what they are thinking about, as opposed to how we think of them, or how we think about, in our Western ways, we might solve their problems.” 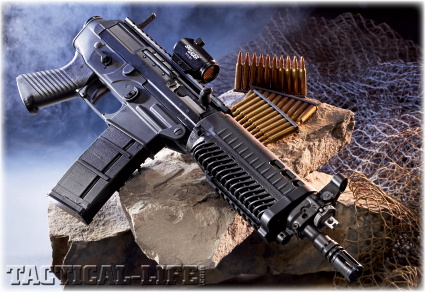 Get the defensive power of a combat rifle shrunk down to pistol size with...