4
SHARES
144
VIEWS
Share on FacebookShare on Twitter
The super-reliable Beretta TX4 Storm was light on recoil and weight. It handled every load on the range with ease.

Having been deploying and using a tactical shotgun for well over 20 years, it is pretty difficult to impress me. Tactical shotguns of every variety, including a few select-fire models, have seen serious range time in my hands. Most are really high on the “cool factor” and often very low on the practicality scale. A shotgun is a simple tool, and it needs to stay as simple as possible. In the right configuration, it is a fantastic entry or patrol long gun. A shotgun is still my favorite go-to weapon and one is seldom far from reach. There really is no more versatile close-quarters weapon, and in the right hands, a shotgun can still be effective at longer ranges.

It might be hard for people to spot differences in shotguns, but they really have evolved quite a bit in the last 10 years. Maybe not so much in form as in function and manufacture. Like the rest of the gun industry, shotguns have benefitted from advanced materials and computer-aided manufacturing. They are lighter, stronger, and more reliable—especially the semi-autos. For years, running a semi-auto was a compromise. The gas-operated models could be “adjusted” to work reasonably well so long as you used the same ammunition. Recoil-operated guns would work but could be rather punishing. Some would run practice ammunition, others would not. It was quite the process to make certain your gun would always work—not something you want in a tactical gun. This meant that pump guns remained the most reliable and often the most common.

Pump guns are great, and a practiced operator can run them incredibly fast. They have the advantage of being able to cycle all kinds of ammunition as well. But in the hands of an average officer, a semi-auto is a ton faster and simpler. It was just a matter of getting them to work. And in the police world, it’s just as important to get them to work with practice ammunition. Duty ammunition is pricey and most agencies practice with some sort of lesser load. Even better would be the ability to run the lower-recoil buckshot. These loads are so well made these days that there is no real advantage to the higher-velocity rounds. With eight or nine pellets flying at around 1,200 FPS (feet per second), low-recoil rounds are as effective as they get at any typical police engagement distance. The lower recoil also means faster repeat shots and the ability to get more practice in. It would be a perfect world if a semi-auto could handle it all, one that really has escaped us—at least until now.

The Beretta TX4 Storm is a gas-operated shotgun utilizing a rotating bolt and a 3-inch chamber. The return spring mechanism is all housed forward of the action. Geared toward the police and self-defense market, the TX4 utilizes an 18.5-inch, chrome-lined and hammer-forged barrel. The receiver is made from a lightweight alloy and features a Picatinny rail on top. The front sight is a protected white dot on a post, and an LPA adjustable rear sight is attached to the rail.

The safety is mounted just forward of the triggerguard for easy access. The action is operated using a charging handle. Holding open on the last round, the bolt is released using a large button on the right side of the receiver. A magazine tube release allows for the weapon to be fully loaded with five rounds (2 ¾-inch shells). An operator can hold the bolt to the rear and insert a shell without ejecting a round from the magazine tube. A small button at the rear of the loading port releases shells onto the carrier from the magazine tube.

The stock is made from fiberglass-reinforced polymer. Rubber inserts are placed in both the top and bottom of the pistol grip, aiding in control and providing some cushion against recoil. The length of pull is adjustable using spacers as necessary. The TX4 comes with a spacer to accommodate left-handed shooters and two sling swivels. This gun was shipped with two extra chokes, a choke tool, and an oversized charging handle.

To facilitate testing, I added a couple of things. I attached the sling swivels and installed a Blue Force Sling. This sling operates either as a cross-body tactical sling or conventionally, making it perfect for this gun. I also prefer to carry slugs just forward of the chamber in a two-round Slide-Loc made by 3GunGear. This shell carrier can be attached using Velcro, or in my case, four small screws. It takes a bit of work, and you need to make sure they do not protrude too far into the forend, but it is solid, fast, and always with the gun. At the same time, it adds very little weight.

Lastly, I mounted a Vortex Razor Red Dot to the rail. This little red dot is proving to be very rugged, reliable and easy to use. With the included rail attachment, it was situated perfectly. Made of hardcoat anodized aluminum, it is rated for high recoil. It is also water and dust-proof. A nice feature is the ability to change batteries without removing the sight. The intensity of the 3-MOA dot is adjustable and with a one-year battery life, it’s well suited to duty use. 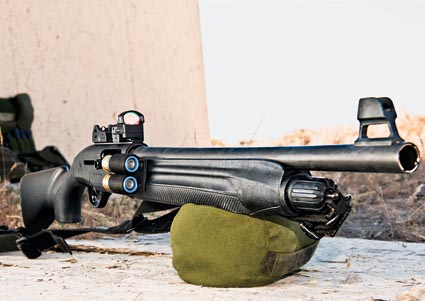 I ran Federal Tactical slugs through the TX4 to zero the sights. These slugs are carried by many agencies and are perfectly suited to police work. They tend to be accurate and offer all the terminal ballistics you will ever need in the real world. All my working shotguns are zeroed at 40 yards from kneeling using these slugs. Once a nice, fist-sized group was accomplished, it was time to go to work.

My first test was to see exactly what this shotgun would run. Testing for duty ammunition consisted of low-recoil tactical buckshot from Hornady, Federal, Winchester and Remington. Practice ammunition ranged from Federal Top Gun to several different loads from Winchester and Estate. The Federal Top Gun load is used by my police department as a practice load and seldom cycles in a semi-automatic shotgun. The rest typically operate in my other guns with no real issues.

To my surprise, all the low-recoil duty ammunition ran perfectly. In fact, not only did it run, but it did so as fast as I could pull the trigger. The bolt held open on the last round with each and every low-recoil tactical load. The recoil was so soft it was actually a bit disconcerting at first—it took me a few rounds to be certain it was shooting. This is a soft-shooting shotgun with the full-bore stuff. With the tactical rounds, it was downright pleasant! This may be just about perfect for those with any sensitivity to recoil. Some of the practice ammunition I’ve used in my other guns was actually a bit stiffer than the tactical loads. Having never had an out-of-the-box semi-auto run any low-recoil buckshot, let alone all of it, this was truly impressive. I experienced no issues with the practice loads as well, including the Top Gun. It trickled out a bit more than the other loads, but the TX4 ejected it without problems.

Patterning was solid, and the TX4 produced some pretty impressive groups. Hornady won the day, with the Federal buckshot running a close second. At 20 yards, the Hornady TAP 00 buckshot spread measured a mere 2 inches. It surprised me enough that I performed the same test over 10 rounds. The widest spread measured 2.25 inches, making this plenty accurate for most police applications. From 10 yards and in, it might as well be a rather large slug. A range of 32 yards was required in order to get the buckshot outside the 8-inch square of my test target. The widest of the tactical stuff was 3 inches—the TX4 is a solid performer with most low-recoil buckshot.