“One of the most important developments over the past year has been the impressive determination of Pakistan’s efforts against extremists that threaten the stability of the Pakistani state,” Army Gen. David H. Petraeus told members of the Senate Foreign Relations Committee.

Petraeus praised the determination of Pakistan’s civilian and military leaders “to fight elements of the extremist nexus.”

Petraeus cited the Pakistani military campaign as “the largest and most successful operations Pakistan has conducted against internal extremists.”

That success has come with a cost, he said, noting many Pakistani military, Frontier Corps and police have died or been injured during the course of operations.

Pakistan’s anti-insurgent campaign against Pakistan Taliban operatives “is an important step forward and does facilitate our efforts to degrade the extremist groups in the border region and to defeat al-Qaida,” Petraeus said.

Pakistan experienced a number of deadly terrorist attacks this year, many of which have been attributed to the Pakistani Taliban. The violence has made Pakistan’s leaders and populace sit up and take notice.

“The leadership, all the political leaders, the civilian populace, the clerics and the military have all united … in recognizing that the internal extremists represent the most pressing existential threat to their country,” Petraeus said.

The Pakistani military “did quite good work” against extremists lodged in the country’s northwestern region, he said.

“They did not just clear and leave; they have cleared” the area of insurgents, he said. “They have held on to it. They are working the rebuilding piece.”

Meanwhile, Petraeus said, the United States and Pakistan are building a relationship based on trust through which they can work as partners to confront threats of mutual concern.

Regarding the Afghanistan-Pakistan border, the general acknowledged a risk that U.S.-coalition operations in Afghanistan could prompt insurgents to seek sanctuary in Pakistan, particularly their leaders who have the resources to relocate.

“And that is why we’re working very hard to coordinate our operations more effectively with our Pakistani partners,” he said, “so that they know what our operational campaign plan is and can anticipate and be there with a catcher’s mitt … to ‘greet’ these individuals.” 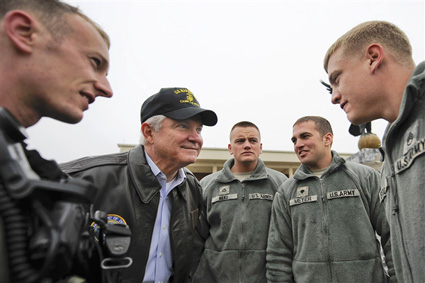