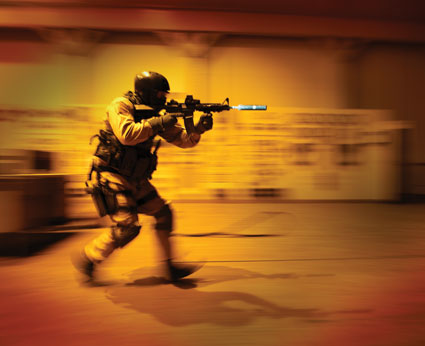 As with any community that prospers and becomes a commercial hub, High Point, N.C., has attracted a violent criminal element. In high-risk situations, the tool that the High Point P.D. deploys to counter the threat from violent crime is the agency’s Tactical Team.

Known as “Furniture City” from generations as an international center for the design, manufacture and marketing of home furnishings, High Point’s prosperity has not been all good news. Criminals for profit will come to where the money is, and this cordial urban area is no exception.

On Call Tactical Unit
High Point P.D. has 225 sworn officers, which includes 22 volunteers who comprise the Tact Team, tasked to police an area of 55 square miles—the eighth-largest city in North Carolina, with a population of 95,000. High Point is unique as it is the only city in North Carolina that lies in more than one county: The corporate limits lie in Guilford, Davidson, Randolph and Forsyth counties. High Point is one of the three major cities that form the metropolitan area known as the Piedmont Triad, along with the cities of Greensboro and Winston-Salem, which it borders. Greensboro ranks as the third largest city and Winston-Salem the fifth largest city in the state, with a combined population of more than 400,000. High Point’s central location, with easy access, also facilitates criminal activity.

The Tactical Team is an on-call unit with all members serving in various full-time assignments such as patrol, training and detectives. The unit also has a tactical medical section composed of an MD and two Paramedics who act as associate reserve officers. Both male and female officers serve on the team and are selected based on rankings achieved during a tryout process. Candidates must have a minimum of two years experience as a patrol officer, and prior military service is considered a plus.

Qualification tryouts involve a physical fitness test, oral examination and various situational exercises designed to evaluate each candidate’s ability to work as part of a team under emotional and physical stress. Skill with firearms is also evaluated and candidates must qualify with a score of 90% or higher on department-issue weapons. Once selected, candidates must attend and successfully complete the Basic S.W.A.T. Course at the North Carolina Justice Academy or another comparable course.

Specialized Training For Mean Streets
Once the basic course is completed, new operators finish a comprehensive in-house training program and other outside schools until they are evaluated as being ready for tactical duty. Newer operators generally serve as part of the perimeter section until they complete additional training and gain experience. Once they are proficient in basic tactical operations they can then go on to more advanced training in fields such as hostage rescue, chemical munitions, K-9 employment and advanced long-range marksmanship.

Operators take part in a minimum of 10.5 hours training during a tactical exercise day scheduled for each calendar month. In addition to this training, operators assigned to the sniper and hostage rescue units complete an additional minimum of four hours each month. Emphasis is placed on realistic and repetitive training in basic skills and teamwork. Training is considered vital and taken very seriously by members of the Tactical Team. Procedures such as maneuvering with ballistic shields, team dynamic entry, building searches, suspect arrests and firearms marksmanship are practiced regularly. Joint training with other area S.W.A.T. teams is also conducted to ensure interoperability in mutual-aid situations.

Additional Outside Training
In addition to in-house training, team members regularly attend schools conducted by other government agencies and private training providers. New equipment, techniques and procedures are evaluated, and often adopted based on officer experience at these schools. One such technique is the S.P.E.A.R. System (spontaneous protection enabling accelerated response) developed by Tony Blauer of Blauer Tactical Systems. The S.P.E.A.R. System is a close-quarter personal defense method that utilizes a person’s natural flinches and reaction caused in response to fear or violence, and converts them into a method of successfully engaging a hostile threat. Team operators receive instruction in this method and utilize it in their entry, building-search and arrest drills.

Properly Armed For The Threats
The standard sidearm of the Dept. and Tact Team is the .40-caliber Glock 22. Each pistol has tritium night sights and an integral accessory rail. Tactical officers are issued Sure Fire or Streamlight rail lights for use with the Glock. Tactical drop-leg and vest holsters are utilized to carry the handguns. Speer Gold Dot 180 grain HP is the issue pistol ammunition.

Remington 870 12-gauge shotguns in various configurations are standard issue. Most shotgun-equipped operators on the Tact Team carry the 2441 configuration with rifle sights and extended magazine tubes, which hold seven rounds. Also used is the highly flexible 870 Modular Shotgun System that can be quickly changed between conventional, close-quarter-entry or breaching configurations. Federal tactical reduced-recoil 00 buckshot and rifled slug rounds are standard.

Rifles and carbines are utilized for perimeter as well as entry use. Operators assigned to the entry and hostage-rescue units use the select-fire Colt M4 Commando. The M4 Commando has an 11-1/2 inch barrel and four-position sliding stock. Although it is compact, it offers the power and accuracy of the 5.56 x 45 mm caliber cartridge. EOTech holographic diffraction sights are installed on the weapons along with Surefire vertical foregrip weapon lights. Colt AR-15A3 tactical carbines are used for perimeter and open-area applications. Although the AR-15A3 can accommodate optical sights, most are currently equipped with Trijicon self-luminous night sights.

For long-range applications the team uses Remington 700 bolt-action sniper rifles and former-military M14 rifles chambered in 7.62 X 51mm caliber. All of the 700 have been fitted and adjusted by Doug Paschal, a custom gunsmith in Welcome, NC. The 700 are equipped with Leupold Mark IV 3.5-10 X 40mm long-range/tactical scopes and Harris adjustable bipods. The SIMRAD clip-on night vision unit is used, providing a nighttime capability to optical day sights. The night vision image is viewed through the eyepiece of the day sight. This allows the shooter to retain the same eye position, aiming reticle and magnification for both day and night use.

The former military M14 rifles were received through the Defense Logistics Agency Law Enforcement Support Office 1033 program. The 1033 program allows excess military equipment, including firearms, to be transferred to LE agencies at no cost, for counter-drug and counter-terrorism use.

Less-Lethal Hardware
A number of hand-thrown and projected less-lethal, chemical and pyrotechnic munitions are used. Combined Tactical Systems or Defense Technologies manufactures the majority of the munitions currently in use by the High Point P.D. Both 12-gauge and 37mm projectiles are utilized. The Tact Team has two 37mm launchers: One a long-serving S&W and the other a newer Model 1315 made by Defense Technologies. Personnel protective equipment is also supplied to team operators. The standard uniform is a sage-green Nomex flight suit, Nomex balaclava, PASGT (Personnel Armor System for Ground Troops) type Kevlar helmet, eye protection, Second Chance body armor, boots and gloves. A MSA Millennium mask is provided for respiratory protection. Blackhawk load-bearing vests are worn along with other accessories such as knee and elbow pads.

Current Tact Team operations primarily involve the service of high-risk warrants, barricaded suspects, manhunts and special events. Because team operators are assigned to the various department divisions, there are always unit personnel on the street at any given time to respond to emergency situations such as armed robberies and active-shooter incidents. Additional operators are always on a callout rotation in case a larger response is needed.

Protecting The Big Show
Twice per year, High Point hosts the International Home Furnishings Market, which is the largest furniture-industry trade show in the world. Each Furniture Market brings in more than 70,000 visitors, from all around the globe. During Market, team operators man counter-sniper/observation posts on rooftops and conduct intensive crime-suppression patrols. As with any large event, the trade show attracts criminals such as organized theft rings and potentially terrorist groups.

High Point Police Tactical Team provides a vital service to the community. Benefiting from a combination of skills developed through training and experience, and the employment of specialized equipment, this team has served and protected citizens and fellow officers for more than 25 years. 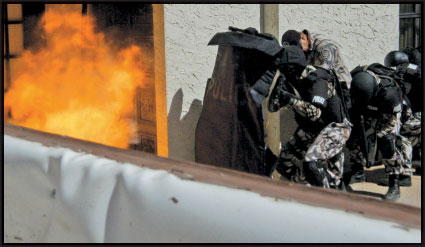 As with any community that prospers and becomes a commercial hub, High Point, N.C.,…