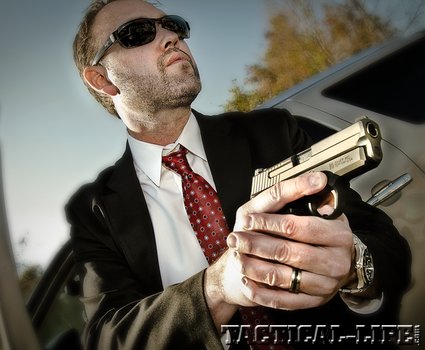 Although it is obviously a compact pistol, the Sig P224 doesn’t shoot like one. Its size, fast handling, remarkable performance and high magazine capacity make it an ideal weapon for discreet personal protection.

When I first started working on protective teams in the 1970s, it was usually necessary to be unobtrusively armed. In those days, we didn’t have earpieces and a lot of the gear associated today with protective details, although we did wear sunglasses a lot of the time. My standard weapon was a Browning Hi-Power, backed up by a .380 Walther PPK and/or occasionally a .25 Baby Browning. I used a shoulder holster much of the time for the Hi-Power because it let me better secure the weapon in crowds or stand with my arms crossed and my hand near the weapon. I also learned to access it with my support hand. In crowds, of course, my hands were in front of me to speed reaction time. The PPK was usually in one of my trouser pockets, though in cold weather I sometimes carried it in my Burberry. 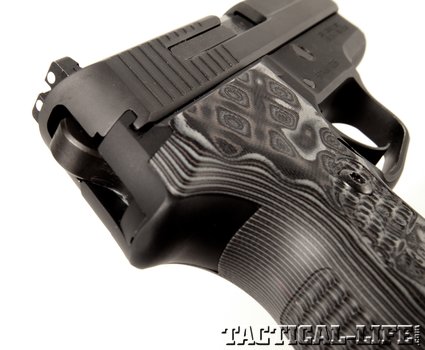 The P224’s somewhat bobbed hammer is less likely to snag should it be drawn or even fired from concealment.

There were often times when the PPK was my only weapon. I had one job looking out for the children of a wealthy European who was married to an American. It turned out to be an easy gig as they were nice kids and the threats were minimal, but even if I had wanted to carry my Hi-Power I could not have done so as I was limited to the PPK by my licensing.

I spent some years teaching and taking security jobs in the summer, which often meant working in lighter clothing. As I result, I experimented with various ways to have a more powerful handgun that could be concealed in a pocket. I also used ankle holsters, but I have never found them that comfortable, especially in hot weather. When Detonics introduced their compact .45 Auto I tried one of those—the company even made one for me in .38 Super when I had a job in a land that did not allow 9mm or .45 ACP weapons. I had custom gunsmith Curt Hardcastle build me a chopped-down S&W Model 39 and a chopped Browning Hi-Power. All of those experiments worked to some extent, but it wasn’t until the latest generation of full-power compact autos that I have really found weapons that I consider optimum for pocket carry or other carry under light clothing. One of the very best of these is the Sig Sauer P224. 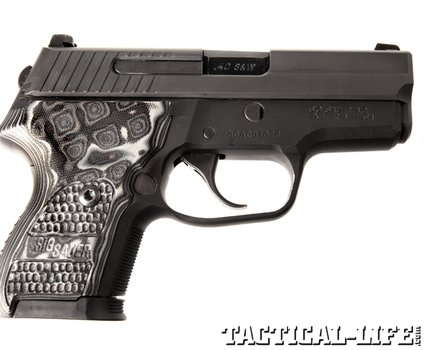 More or less resembling a chopped down P229, the innovative P224’s sleek profile offers a good view of the slim grips, which are as comfortable as they are unique.

I had actually switched to the P226 from the Hi Power about 25 years ago for my primary pistol. Then, when the DAK (Double-Action Kellerman) trigger system became available on Sigs, I ordered a P226R DAK. As much as I like the P226 though, it is a big pistol to carry concealed. In an inside-the-waistband holster it has done well in St. Louis summers as well as some even hotter and more humid climes. I’ve tried the P228 and P229, too, and though a bit more compact, they still won’t fit in a pocket. The P239 is slimmer, but one reason I like the P226 is it gives me a lot of rounds. Enter the P224; it seems to meet most of my criteria.

I guess the P224 could be described as a chopped down P229. It has the same heavy, thick slide, but its slim grips make it more concealable, as do its shorter slide and grip. It also has the DAK trigger, which is an indirect aid to concealment since the bobbed hammer is less likely to catch on a pocket lining, untucked shirt, etc. A few years ago I wouldn’t have considered the P224 a pocket pistol, but I’ve learned that if Levis or trousers with relatively deep pockets are worn, a substantial autopistol can be carried within. A well-designed pocket holster is a virtual necessity. Right now, that’s a problem, as the makers from whom I normally order pocket holsters do not yet have a P224 from which to mold the pocket holster.

Let me digress here for a moment and explain my current interest in full-power, higher-capacity pocket pistols. I find myself providing security fairly often for outdoor events such as pool parties at a residence in a gated community. Part of my brief is to fit in and not draw attention, either conversationally nor because of attire or demeanor. Many of the guests are used to seeing me around and have grown friendly, which sometimes can entail pats, hugs, etc. Hence, a belt gun might attract more attention. I don’t always know if I’m the only one present who is armed, as my home state is a shall-issue state. Still, I like having a pistol with reasonable magazine capacity and a spare mag in the support side pocket.

As I’ve grown used to carrying full-power pocket autos, I’ve also started using one of them as my day-to-day walking around pistol. I like to wear t-shirts and Levis, and a pocket pistol allows that attire. I do still wear a belt gun sometimes, especially if going to some of my city’s better restaurants—which aren’t always in better neighborhoods. Under a jacket, rests the belt gun with one of my pocket pistols in the support-side pocket.

Its SIGLIGHT Night Sights help me acquire targets in low light and quickly locate my pistol on the nightstand or in a drawer at night. The elevation seems pretty good on my P224. It did need a slight push with the sight pusher for windage. Just as a sidenote, SIGLITE Night Sights stick up enough that they will work for a weak-hand slide operation drill. 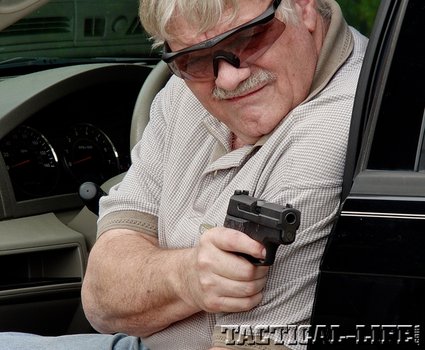 Since the P224 I have been shooting is in .40 S&W and is a compact model I decided to fire quite a few rounds to see if the recoil became unpleasant. So far in multiple shooting sessions I’ve fired about 500 rounds through the P224. This includes reloads as well as Black Hills 180-grain JHPs. I have fired at least 100 rounds on each occasion with the only rest being to reload the two magazines, which come with the pistol. Recoil is noticeable, but I certainly did not find myself anxious to finish off the shooting session. Reliability has been very good. I have not cleaned the pistol yet as I wanted to see if would keep functioning. At around 300 rounds, I had a failure of the slide to fully close. I took the slide off and with a lightly oiled cloth wiped away the residue on the feed ramp and around the chamber as well as on the face of the slide and the rails. No more problems after that. Of the total rounds fired, about 400 have been reloads.

I am quite happy with the accuracy. At 25 yards using Black Hills 180-grain, five-shots grouped into 3.5 inches. I did most of my shooting at 10 and 15 yards, as I felt these were more likely distances for using the P224, though I also shot it out to 50 yards at plates and was hitting them three to four rounds per mag. A lot of my 10- and 15-yard targets were shot on police training targets, and I was really more concerned with quick double-taps, center of mass. Nevertheless, the two shots were normally within 1 to 2 inches. They were a bit left, as I still need to bring a sight pusher to the range to get the rear sight zeroed. 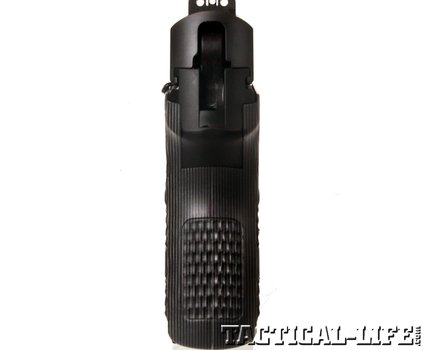 I like the recent generation of compact autos chambered for serious cartridges. In fact, since their advent I carry a belt gun far less often and am content with one or two of the compact 9mm or .40 S&W autos. I don’t own any in .357 SIG as of now. These pistols are a real boon to those who carry a pistol all the time concealed, whether as a law enforcement professional, a private security contractor or a concealed carry license holder. The Sig P224 ranks as an excellent example of this type of pistol. For more information, visit sigsauer.com or call 603-772-2302. 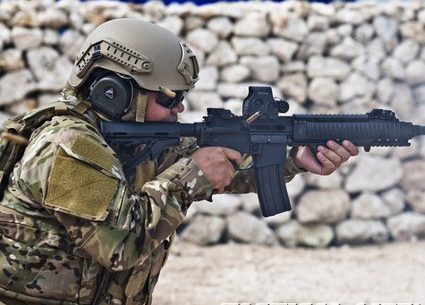 Although it is obviously a compact pistol, the Sig P224 doesn’t shoot like one.…