The AR small arms family, which includes the current standard M4 carbine, hasn’t exactly been covering themselves with glory in the War on Terror presently being waged in Afghanistan, Iraq and other charming spots around the globe. Issues of both reliability and lethality have commonly been reported from those warriors at the “sharp end of the spear.” To rectify at least some of those issues, the military has quietly been withdrawing M14 rifles from storage and issuing them by the thousands. Unlike the ARs, the M14s have a proven track record of reliability and lethality, plus the capability of penetrating cinder block and mud brick structures that have proven impervious to .223 rounds. Of course the M14 isn’t without issues of its own. 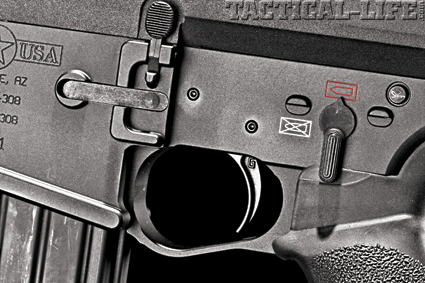 The P308’s fire controls are pure AR, so anyone who is familiar with the basic AR platform will be right at home with the P308. The two-stage match trigger broke at 3.5 pounds.

The weapon was never intended to accept the many accessories that characterize modern tactical operations, and tooling to make new ones to military standard no longer exists. Worse, the supply of M14 parts is drying up, and things have gotten so bad that the military has been requesting M14s previously transferred to law enforcement agencies to be returned. New production is pretty much out of the question because the M14 is a very expensive rifle to manufacture, essentially being a modified version of the venerable M1 Garand. This isn’t to say that there aren’t quality commercial versions of the M14 – there are, but getting them certified to full military specification would be very expensive and our military would still be equipped with a rifle that had its origins in the 1930s. If our military is to have a .308 rifle, it should be state-of-the-art…enter POF-USA. 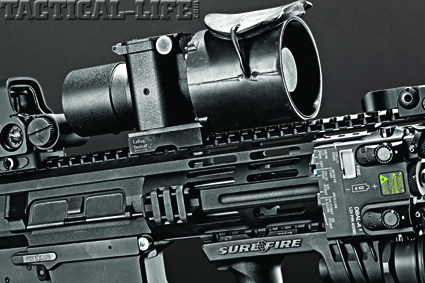 The OSTI AN/PVS-22 Universal Night Sight is current military standard and is also in widespread use by law enforcement tactical teams.

Patriot Ordnance Factory USA has been manufacturing AR-type rifles and carbines for several years that not only have their very simple and reliable gas piston/operating rod C.R.O.S. (Corrosion Resistant Operating System) but that also operate without lubrication of any kind. As far-fetched as this may sound, the anodized receiver’s interior is plated with electroless silicon nickel, and the other operating components are hard-chromed, NP3-plated (NP3 is a process that combines sub-micron particles of Teflon and electroless nickel, a product of Robar. POF also offers its weapons with both upper and lower receivers NP3-plated). For patrol and entry work, the latest 12-inch barreled P308 is arguably the best choice available.

The P308’s barrel and barrel extension are heat-treated by a proprietary process referred to by POF-USA’s CEO Frank Desomma as “deep nitride heat treatment.” While Frank is understandably reluctant to divulge the exact nature of the process, the results are obvious. The treatment penetrates the barrel steel to a depth of three to five thousandths of an inch and gives a surface hardness of Rockwell 68-72. To put this in context, hard chrome has a surface hardness of Rockwell 65-68, but there are issues with hard chrome that make it less than ideal for rifle barrels, primarily that hard chrome has surface irregularities that cannot be eliminated, the primary reason that match rifle barrels are almost universally plain chrome-molybdenum or stainless steel. Meanwhile POF-USA’s deep nitride treatment has zero imperfections and is incredibly smooth. For this reason, the P308’s barrel regularly achieves outstanding accuracy. The deep nitride process also virtually eliminates fouling of any kind — copper included. 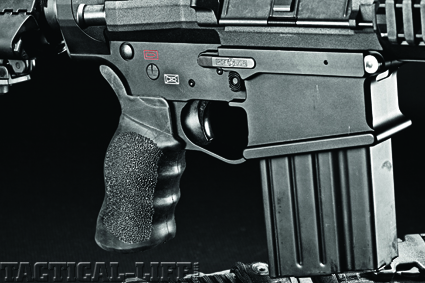 A unique feature of the P308 is the ambi bolt release that allows the shooter to drop the bolt with his trigger finger after inserting a mag into the mag well–a significant ergonomic enhancement.

Our P308 test resulted in shot groups that are more in keeping with a bolt-action precision tactical rifle than a gas-operated carbine. Our test carbine with its 12-inch barrel (14.5 inches with muzzle brake) shot sub-minute of angle groups out of the box with no break-in other than a few test rounds at the factory prior to shipment to verify function and a few rounds to get the optic zeroed. 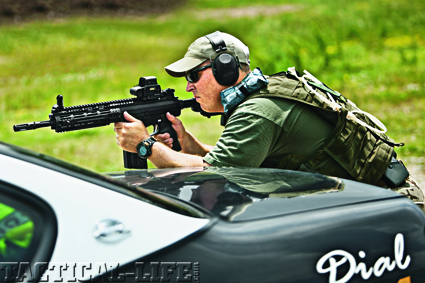 The P308 gas system consists of a gas piston and operating rod. When it becomes necessary to clean the gas system, disassembly is accomplished by simply rotating the FAL-type plug a quarter turn while depressing the spring loaded latch and pulling it out of the gas cylinder. The piston and operating rod then just fall out when the carbine is pointed muzzle down. The operating system should be checked periodically, since it takes the brunt of hot gases when the rifle is fired. Any carbon buildup in the gas system can be removed with a Scotch Brite pad — no solvent is needed to clean the P308, nor is any lubrication required.

As good as it is, the improved gas system is only the beginning of the P308’s story. The bolt carrier has been modified for increased reliability and accuracy with surfaces that ride on the upper receiver being somewhat larger than conventional ones, while maintaining recesses to accommodate any fouling that might accumulate. Also, the rear portion of the bolt carrier is essentially unstressed, allowing for lightening cuts as a weight saving measure. Every effort has been made to make the P308 as light as possible and still maintain reliability and accuracy. As a top-end AR-type rifle, the P308 has virtually all the features to make the rifle as close to perfection as possible. A unique characteristic is the P308’s ambidextrous bolt release that allows the shooter to drop the bolt with his trigger finger after having inserted a magazine into the magazine well — a significant development in terms of ergonomics. Our test rifle came with a two-stage match trigger that broke crisply at precisely 3.5 pounds with zero creep or backlash.

Another standard feature is Vltor’s Modstock — available in several colors and configurations, including black, flat dark earth and OD green. There are two collapsible Modstocks; standard and “clubfoot.” The clubfoot version like that of our test carbine facilitates using the off hand to pull the stock into the shoulder for greater stability. Vltor’s waterproof compartments can be accessed with the stock on the carbine. The compartment adapters provide a flat surface for an excellent cheekweld. It also raises one’s line of sight to an ideal level for either open sights or optics. The improvements don’t end with comfort and utility, though. Vltor also redesigned the latch on both standard and clubfoot configured stocks. The Modstock offers several different sling options. The standard M4 sling can be used, but the Modstock has a provision for Uncle Mike’s quick detachable sling swivels that can be fitted to either side of the stock.

From an interoperability standpoint, almost all AR-15 type parts including springs and fire control components fit the P308, save for the front hinge pin that is 0.25 of an inch longer than that of a smaller caliber AR. Thus, those organizations changing over from 5.56mm ARs to the P308 will have minimal logistics issues. Naturally, components like bolts and bolt carriers from 5.56mm ARs do not fit the P308, but POF magazines are interchangeable with C-Products, DPMS and Knight’s SR-25 magazines.

Optics
About all that are necessary to complete the P308 as a tactical carbine suitable for just about any situation are an optic and night vision, so the rifle is capable of true 24/7 operations. We began with an EOTech Holographic Weapon Sight (HWS), arguably the fastest optical sight available for CQB use. The HWS has a 65 MOA reticle with 1 MOA central dot that is totally parallax free and causes the shooter’s eye to naturally align with the target. In use, the shooter simply keeps both eyes open, shoulders the rifle and alignment with the target is virtually automatic. The HWS is now being purchased by the thousands for military use and frequently can be seen in photos of troops in Afghanistan and Iraq. Some special operations users do not turn on the reticle for CQB use, instead simply framing the target in the HWS window and firing. At CQB distances of 25 to 50 yards, this is probably adequate. The HWS also has ten levels of infrared (IR) reticles, but with the latest in night vision technology, an illuminated reticle in either visible or IR is not necessary. The latest HWS runs off a single 123 lithium battery mounted at 90 degrees to the rail axis, significantly shortening the overall length of the optic and allowing more room on MIL-STD-1913 rails for other accessories such as the current military standard AN/PVS-22 Universal Night Sight (UNS).

Finally, we installed a SureFire M900 vertical foregrip combat light with infrared (IR) filter. The M900 is in wide use by both military and LE special units and features a 125-lumen intense white light, plus low-level LED “navigation lights” that emit very little visible light for moving in the dark with minimal signature. With the IR filter and the AN/PVS-22 in place, the M900 can be used like an invisible searchlight to illuminate and engage targets using the EOTech sight without visible light. Of course anyone with night vision can detect the IR light, but this is about as good as it gets unless one has access to very expensive thermal imagers.

The SureFire muzzle brake is instrumental in reducing felt recoil and muzzle rise during strings of rapid fire.

Shooting the P308 was a remarkable experience. Right from the box, our short-barreled P308 shot sub-MOA groups. With accuracy on a par with bolt-action precision tactical rifles, it was like nothing in our experience. We had been told by POF that the rifle was sub-MOA accurate, but the accuracy we experienced was extraordinary — especially from a short-barreled rifle or carbine.

We noted above that the 7.62x51mm NATO round has become a favorite in the “sandbox” based on reports we have seen. Now there is a .308 caliber carbine that delivers everything a rifleman could want – remarkable accuracy, reliability and lethality, all in a compact lightweight package. If the U.S. military is seeking a replacement for the M16 or M4, it would do well to start with POF-USA’s P308. If we could sum up our impression of POF-USA’s P308 carbine, we’d say first that the company’s motto “Relentless Reliability” doesn’t go far enough – as true as that is, we’d also add “amazing accuracy.”