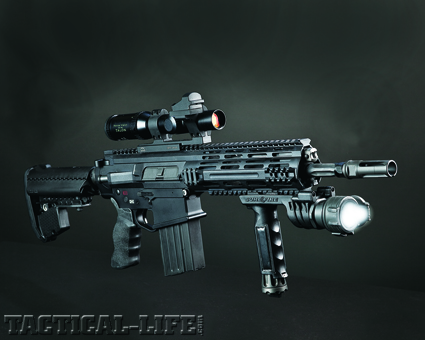 For those who may not have kept up to date on military and law enforcement matters, the AR small arms family, which includes both the M16 rifle and M4 carbine haven’t exactly been covering themselves with glory in the War on Terror, presently being waged in Afghanistan, Iraq and other charm spots around the globe. Issues of both reliability and lethality have commonly been reported from those warriors at the “sharp end of the spear.” To rectify at least some of the reliability and lethality issues, the military has quietly been withdrawing M14 rifles from storage and issuing them by the thousands. Unlike the ARs, the M14s have a proven track record of reliability, lethality, plus the capability of penetrating the cinder block structures that have proven impervious to 5.56mm rounds.

Of course, there are issues with the M14 as well. The M14 was never intended to accept the many accessories that characterize modern tactical operations and although there are modular stocks for the M14, they do not solve the M14s basic problems. What’s worse, there aren’t any M14s left to issue and tooling to make new ones to military standard no longer exists. In addition, M14 parts are drying up. Things have gotten so bad that the military has been requesting that some M14s previously transferred to law enforcement agencies be returned. Moreover, the M14 is a very expensive rifle to manufacture, being essentially a modified version of the venerable M1 Garand, a rifle that was originally designed in the late 1920s and first issued to troops in 1936.

Gun Details
A solution to both lethality and reliability issues is POF-USA’s P308. Patriot Ordnance Factory USA has been manufacturing AR type rifles and carbines for several years that not only have a very simple and reliable gas piston/operating rod system CROS (Corrosion Resistant Operating System), but it also operates without lubrication of any kind. As far fetched as this may sound, we have had a P415 for a long term test and evaluation, and have yet to clean or lubricate it, other than to wipe the internal parts with a dry shop towel to remove what little fouling gets into the receiver. Because the receiver interior is coated with Robar NP3, and the other operating components are electroless nickel or hard chromed, they are self-lubricating and nothing sticks to them. NP3 is a process that combines sub-micron particles of PTFE (Teflon) and electroless nickel. POF, however, has taken the AR to what may well be its ultimate level with its P308 because as good as the P415 is, the P308 has the additional power of the 308. POF offers the P308 with receiver interior either NP3 coated or black anodized.

The P308 retains most of the features that have led to the P415s success and then some. The P308’s receiver is plated with the same NP3 as the P415, but there the similarity ends. The P308’s bolt carrier is heat-treated and electroless nickel-plated and the bolt is hard chromed. The P308’s barrel and barrel extension are heat-treated by a proprietary process referred to by POF’s CEO Frank Desomma as “deep nitride heat treatment.” While Frank is understandably reluctant to divulge the exact nature of the process, the results are obvious. The treatment penetrates the barrel steel to a depth of 0.003 to 0.005 of an inch and gives a surface hardness of Rockwell 68-72. Hard chrome has a surface hardness of Rockwell 65-68, but there are issues with hard chrome that make it less than ideal for rifle barrels, primarily that hard chrome has surface irregularities that cannot be eliminated, which is the primary reason that match rifle barrels are almost universally plain chrome-molybdenum or stainless steel. POF’s deep nitride treatment, on the other hand, has zero imperfections and is incredibly smooth. For this reason, P308 barrels are regularly achieving amazing accuracy that literally has to be seen to be believed. 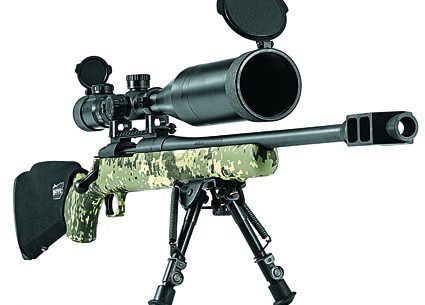