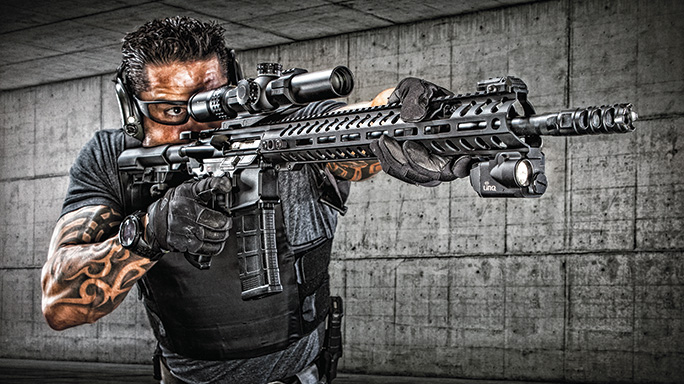 1 of 5
Photo by Straight 8
Renegade Plus: POF-USA’s First DI 5.56 Rifle
Patriot Ordnance Factory has pulled out all the stops in creating the Renegade+, a direct-impingement AR with plenty of bells and whistles to suit every operator. Shown with a Burris 1.5-8x28mm XTR II scope and Crimson Trace LiNQ system. 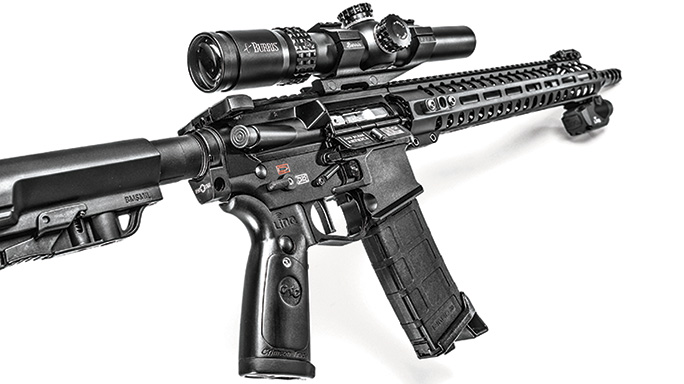 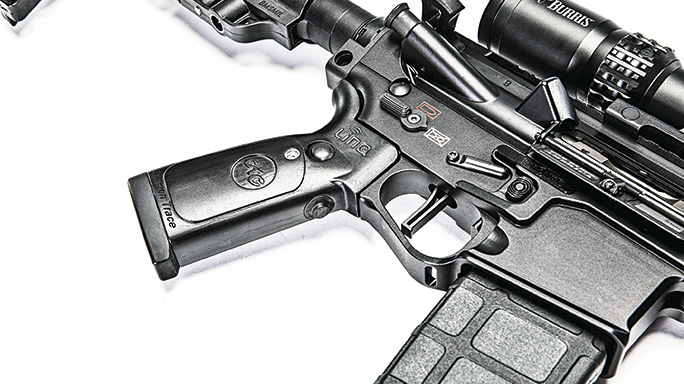 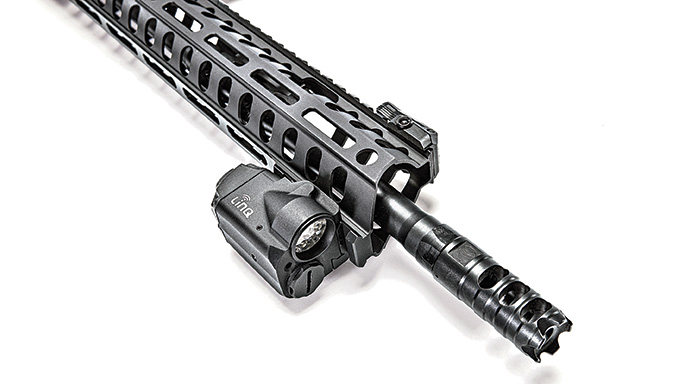 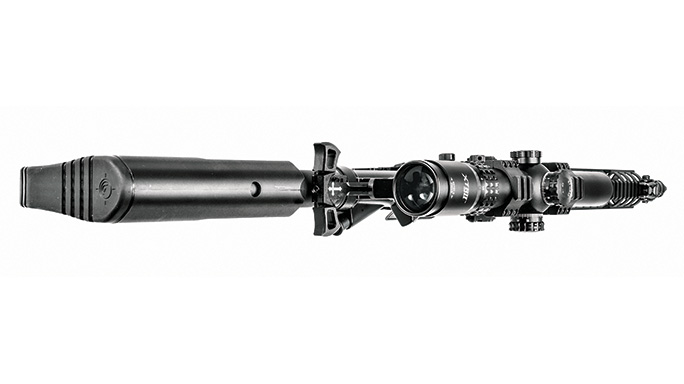 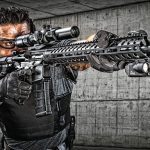 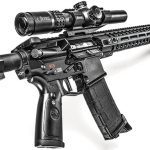 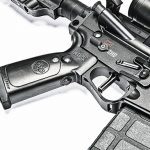 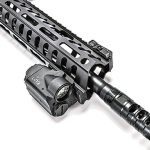 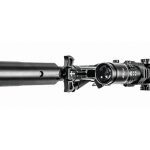 A renegade is one who breaks away from the pack and blazes his or her own path. This definition fits the latest release from Patriot Ordnance Factory, or POF-USA, to a T. Long known for its piston-driven rifles, the Renegade has broken away from that and comes into the world as POF-USA’s first direct-impingement (DI) rifle.

The Renegade Plus is a lightweight game-changer that comes in at only 6.4 pounds unloaded. And while it is a very lightweight AR, it still packs plenty of features when compared to others. Most prominent in the list of features is the ability to tune the rifle for different ammunition. The Dictator nine-position-adjustable gas block, which works with a straight gas tube, allows you to tune the rifle to your preferred ammunition. Even the handguard has been modified with a small cutout that allows shooters to adjust the gas block easily in the field.

The 16.5-inch barrel is nitride heat-treated and features a 1-in-8-inch twist rate. But the barrel is also innovative because it comes equipped with a well-designed heat sink barrel nut that helps dissipate heat. Surrounding the barrel and gas system is the Renegade handguard, which is designed with Magpul M-LOK slots along the 3, 6 and 9 o’clock positions for accessories while a small bottom rail at the front of the handguard can accommodate a bipod or foregrip. The handguard has a full-length Picatinny rail in the 12 o’clock position to accommodate sights, and four quick-detach (QD) sling sockets are positioned at the front and rear on both sides of the handguard.

The barrel is precisely mounted into a unique upper featuring POF-USA’s patented E2 dual-extraction technology, which consists of four small channels cut into the walls of the chamber that allow a small amount of gas pressure to push against the neck of a spent cartridge case. This pressure assists in extraction by breaking the seal between the chamber and case,
and pushing the spent case to the rear as the extractor pulls to the rear. This removes a tremendous amount of work that would otherwise be left up to the extractor.

Another enhancement is POF-USA’s one-piece, NP3-plated bolt carrier. This patented design has the gas key built into the body and positioned behind the cam pin. The end result is a reduction in carrier tilt. The bolt, extractor and firing pin are all chrome plated to help fight corrosion and improve longevity. The roller pin is yet another piece of patented technology from POF-USA. In contrast to standard cam pins that are square and can grind the inside of the upper, the Renegade Plus features an NP3-coated roller head. This design actually rolls inside a channel in the upper, thus eliminating friction and prolonging the life of the upper. The upper is topped off with the company’s ambidextrous Tomahawk charging handle, which strikes a perfect balance between size and function.

But that’s not all. The magazine release is also ambidextrous, and POF-USA has included KNS Precision anti-walk pins and well-positioned finger rests on both sides of the lower, just above the trigger. The lower also includes a flared magazine well and an enlarged triggerguard that tapers toward the rear for a more comfortable grip. The final control is the rifle’s slick-looking trigger—a straight, drop-in, 3.5-pound unit that was developed by POF-USA. My test rifle’s trigger offered a clean break and a short reset.

At the rear of the lower is POF-USA’s unique anti-tilt buffer tube, which features “carrier cradle” extensions to ensure that the carrier is always supported by the buffer tube, even when the bolt carrier is fully forward. This prevents carrier tilt and premature wear. The buffer detent doubles as a lock that inhibits the buffer tube from rotating and becoming loose under adverse conditions. Finally, the lower is furnished with Mission First Tactical’s Battlelink Minimalist stock and Engage pistol grip, making the Renegade Plus very comfortable to shoulder and run.

POF-USA proudly promotes its 1-MOA accuracy guarantee. With talk like that, it was almost a dare to wring out the Renegade+ at the range. The gun I received was brand new and, in standard POF-USA fashion, spotless. While the aesthetics of a new gun should not mean much, the fact that the company takes the time to prepare rifles for shipping this way reflects a commitment to quality. For this test, I added a Burris 1.5-8x28mm XTR II scope in a Burris AR-PEPR scope mount. I also installed Crimson Trace’s new LiNQ wireless light/laser system. This device allows for remote operation of a light/laser module via controls on the pistol grip. With the gun set up properly, it was time to put some holes in paper.

To measure the rifle’s inherent accuracy, I fired it from a bench with both front and rear bags for stability. I decided to try a variety of rounds for the test to see what the rifle preferred. I raided my ammo locker for three different rounds: Black Hills’ 68-grain Match HPs, Hornady’s 60-grain TAPs and Federal Premium’s 55-grain XM193 ammunition.

The combination of great glass and beautiful weather made zeroing the rifle a short affair. Within minutes I was printing groups. Focused, precise shots produced groups that were very impressive. With me behind the wheel, the Renegade Plus preferred the 68-grain Black Hills ammo, which created a solid 0.51-inch five-shot group. This kind of accuracy can only come from a rifle made with tight tolerances and a very nice trigger. I cleaned the barrel at each ammunition switch and let the gun cool. In the following two tests, the Renegade Plus once again proved to be very accurate. The Hornady 60-grain TAP rounds clustered into a group less than an inch wide, as did the Federal 55-grain XM193 ammunition.

Aside from being accurate, I found the gun to be a very soft shooter. The rifle’s good balance and unique tri-port muzzle brake made it easy to keep on target for follow-up shots. But the folks at POF-USA did not design the Renegade Plus as a bench gun. It is designed to be run, and run hard. First up was a series of drills incorporating reloads and movement to different targets. This is where the ambidextrous functions began to really shine. I was able to maintain my standard shooting grip and still run all the functions of the gun. It honestly took some time to adjust to the control positions, but it soon became second nature. My reloads were faster than with a standard AR, allowing me to get back on target much quicker. Even operations like locking the bolt back were made easier. The importance of these aspects cannot be overstated. For the average recreational shooter, the ability to shave time off of a reload may not seem crucial. But to competitors or those who may be defending their lives, this is a crucial element. The gun is fast and easy to keep in the fight. Overall, the Renegade was a pleasure to shoot.

In a time where everyone and their uncle is making direct-impingement AR rifles, it can be tough to be innovative and stand out from the crowd. Yet this is exactly what POF-USA has done with the Renegade Plus. This is not your grandfather’s AR. This is a serious push forward in what ARs can really be. From barrel to buttstock, POF-USA has put together a great rifle—one that is worthy of a very close look! 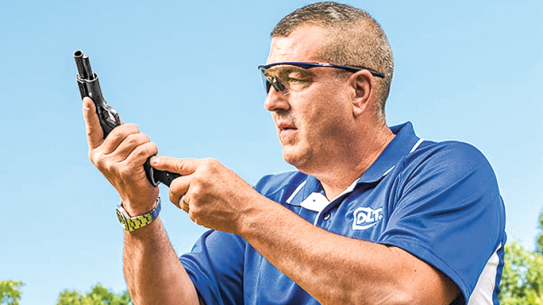