Louisiana: Officer Nicola Cotton, 24, attempts to handcuff a rape suspect described by officials as “twice her size,” and he attacks her violently. After a valiant and violent 7-minute struggle, the young officer is disarmed by the suspect, who then shoots her to death with her own weapon, a slick-slide .40, which does not have a manual safety. He is currently in custody awaiting trial for the murder. Call it Case One.

Case Two, Oklahoma: A domestic violence suspect snatches an officer’s .40 caliber service pistol from its duty holster and opens fire at him and his partner. He wounds one officer and misses the other before being overpowered. He is currently being held on charges of assault and battery with a deadly weapon.

Case Three, Texas: Constable Harry Thielepape dies from multiple gunshot wounds, sustained in a shootout almost a month earlier with one Jesus Reyna. Thielepape had arrested and cuffed the suspect, but Reyna was able to work his cuffed hands to the front of his body, snatch the officer’s service weapon, and open fire. Thielepape was able to draw his backup gun and return fire, shooting his killer to death at the scene.

Case Four, California: A Federal agent accidentally shoots herself in the leg while holstering her service pistol. She survives the mishap.

Case Five, North Dakota: A highly accomplished and respected sheriff’s department detective hangs his slick-slide, striker-fired pistol by its triggerguard on a coat-hook in a stall in the courthouse men’s room. When he retrieves it, the trigger bumps the hook and the pistol discharges. No one is hurt, but it makes the local newspaper, which reports that the veteran detective could be charged with a misdemeanor for discharging a weapon within the city limits.

Safety Net
These five incidents occuring in less than a month, remind us all that most police work does not take place on a pistol range, and “keep your finger off the trigger” is not necessarily enough to prevent every unwanted firing of the guns we carry daily. Most cops today carry pistols without manual safeties, and almost all the key manufacturers have “slick-slide” models. Firearms safety training, handgun retention training, security holsters, and the like have greatly reduced the toll of police officers killed with snatched law enforcement weapons, but obviously, it is still happening. One “safety net” deserving of consideration is a pistol with a manual thumb safety.

Consider the following: Case Six, Illinois: A large suspect disarms a policeman and tries to shoot him, but nothing happens when he pulls the trigger. It’s an issue Smith & Wesson pistol, on-safe. The suspect tries the same with the first responding backup lawman, but the gun still won’t fire; the first responder draws his own S&W and shoots the would-be cop-killer to death. Case Seven, Washington: Suspect disarms a deputy and tries to shoot him, without success; the Colt .45 duty auto is cocked and locked. The deputy ultimately takes the suspect into custody. Case Eight, Arkansas: Suspect grabs cop’s on-safe S&W 9mm from its holster and tries to shoot him with it. The gun does not fire, and when the lawman whips out his backup Taurus .38 snub, the suspect quickly drops the snatched duty weapon and surrenders. Case Nine, Connecticut: Perp grabs cop’s Beretta 92F and tries to shoot him. Gun won’t fire because it’s on-safe; brother officer shoots and kills the perp. Case Ten, two deputies are disarmed of their on-safe Beretta F-series pistols in a gang attack, and two men try to shoot them with their own guns without success. Before they can figure out the safety catches, one officer draws a backup S&W Model 36 .38 Special and shoots both assailants.

Consider also that when the trigger hits something it shouldn’t (a coat hook, the safety strap of a poorly-designed holster, or a careless trigger finger, for example) it will not discharge if the manual safety is engaged.

In 2006, Sig Sauer introduced the SAO (Single Action Only) variation of their P220 service auto in three sizes, all designed to be carried cocked, with the ambidextrous manual safety engaged. In 2007, S&W offered a frame-mounted manual ambi safety on the .45ACP version of their M&P service pistol. S&W recently announced the manual safety will be available on the 9mm, .40, .357 M&Ps as well as the .45.

For many years, the Cominolli thumb safety retrofit has been available for most Glock pistols, from such sources as Tarnhelm Supply. Taurus offers a thumb safety on virtually all their service and off-duty autopistols. Beretta’s service pistols, the M9A1 and the Px4, are available in the on-safe-optional “F” series like the more classic Beretta models before them, that saved the lives of three cops in Cases Nine and Ten. Heckler & Koch has a very ergonomic thumb safety on their Variant One USP police pistols. And, of course, the manual safety is a standby of such classic single-action police autos as the 1911 and the Browning Hi-Power.

Difference In Speed
Conventional wisdom has long held that it might take too long for an officer in reactive mode to draw and fire a pistol whose manual safety was engaged. This, like keeping fingers out of triggerguards when not intentionally firing, is a training issue.

Using a double-action-only Para-Ordnance LDA .45ACP, an open top Blade-Tech range holster, and a Competitive Edge Dynamics electronic timer, I started with my hand just off the pistol and drew to a speed-rock-type shot at close range. Five runs on-safe and five runs off-safe showed an average difference of roughly 1/100 of a second, with the difference actually favoring on-safe carry.

It has been hypothesized that an officer could get hurt because he or she forgot to thumb the safety during a reactive draw. It is likewise possible that in the same situation the officer could forget to pull the trigger too, but I’ve never found a documented case of either of those things happening. The closest I’ve found was one case in Florida where a private citizen drew a Walther .380 and tried to shoot an armed robber. He did not take his safety off, however, and his trigger pulls were fruitless. The criminal was able to shoot and wound him. The citizen admitted later that he never practiced with his pistol. I do not believe this would happen to trained peace officers.

This column is respectfully dedicated to the memories of Police Officer Nicola Cotton and Constable Harry Thielepape, both of whom sacrificed their lives valiantly while protecting the public they swore to serve as the first to respond to violent criminals. May they rest in honored peace. 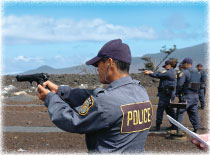