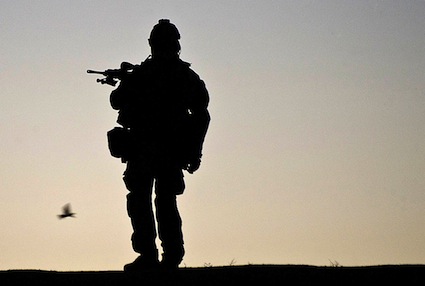 A U.S. Navy SEAL team member with Special Operations Task Force-South provides security from a rooftop during a clearing operation with Afghan forces in the Khakrez district of Kandahar province, Afghanistan, May 6, 2011. (U.S. Army photo by Sgt. Daniel P. Shook/Released)

Thirty Americans – 22 of them SEALS – and eight Afghans were killed Saturday when a rocket-propelled grenade fired by a Taliban insurgent downed their Chinook helicopter en route to a combat mission. All but two of the SEALs were from SEAL Team 6, the unit that killed Osama bin Laden, although military officials said none of the crash victims was on that mission in Pakistan against the al-Qaida leader.

Here are the stories of some of the fallen:

Matthew Mason
A severe arm injury during fighting in Fallujah in 2004 didn’t keep Matthew Mason off the Iraq War battlefield. Nor did it dull the competitive fire of the avid runner and former high school athlete from outside Kansas City.

Within five months of losing part of his left arm, absorbing shrapnel and suffering a collapsed lung, Mason competed in a triathlon. He soon returned to his SEAL unit.

“He could have gotten out of combat,” said family friend Elizabeth Frogge. “He just insisted on going back.”

Mason, the father of two toddler sons, grew up in Holt, Mo., and played football and baseball at Kearney High School. He graduated from Northwest Missouri State University in 1998. His wife, who is expecting their third child – another boy – also attended Northwest Missouri.

Mason returned to Missouri in May to compete in a Kansas City triathlon, and took his family to Walt Disney ( DIS – news – people ) World for the first time this summer, Frogge said.

“He loved doing what he did,” she said. “He was the type of guy who thought he was invincible.”

Read the rest of the Associated Press article at Forbes.com.