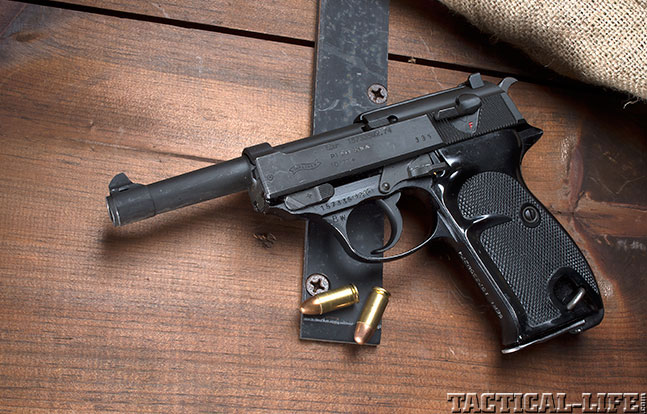 1 of 9
Examining the Post-War P.1 Walthers
The P.1 retained the same dimensions and contours as its wartime parent, the P.38. It also shared the same short-recoil system of operation and DA/SA trigger system. Walther’s only significant change was the substitution of the original steel frame for one of aluminum that was lighter than the original frame. 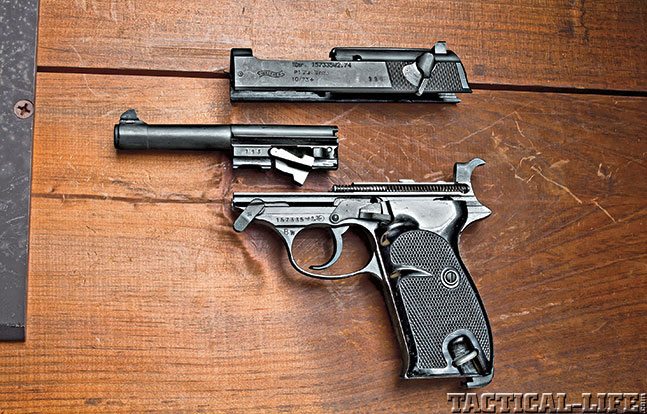 2 of 9
Examining the Post-War P.1 Walthers
The Walther P.1 breaks down into three major groups: the slide assembly, the barrel assembly, and receiver or frame assembly. The recoil springs are captured in the frame assembly so they are less likely to be lost or damaged during routine maintenance. 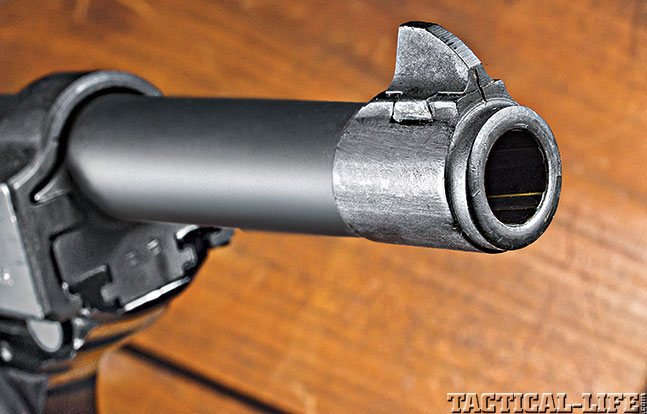 3 of 9
Examining the Post-War P.1 Walthers
The front sight post is dovetailed into its base at the front of the 4.9-inch barrel. 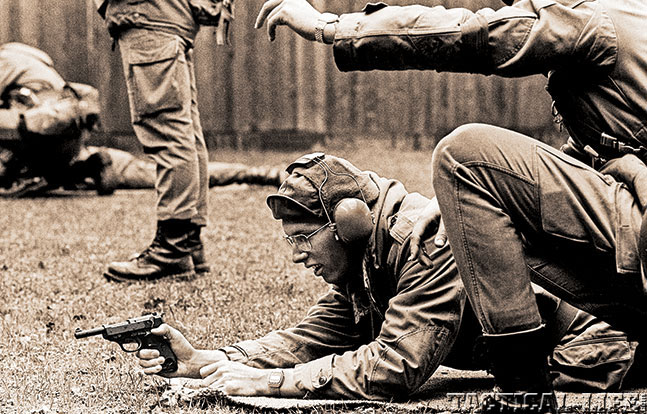 4 of 9
Examining the Post-War P.1 Walthers
For nearly five decades, the Walther P.1 was the standard service sidearm of the post-war West German military (Bundeswehr). 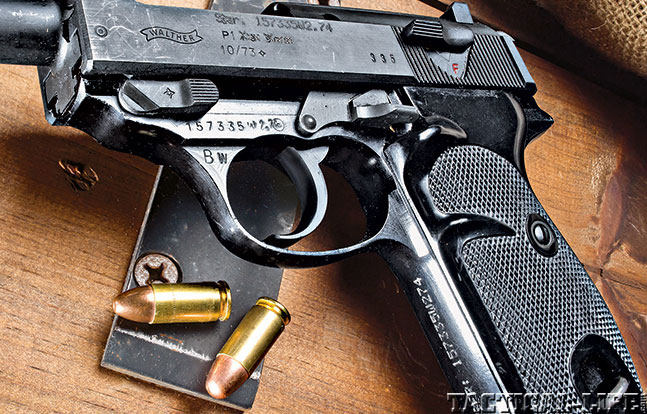 5 of 9
Examining the Post-War P.1 Walthers
The slide stop lever and pivoting takedown lever are located on the left side of the P.1’s frame. 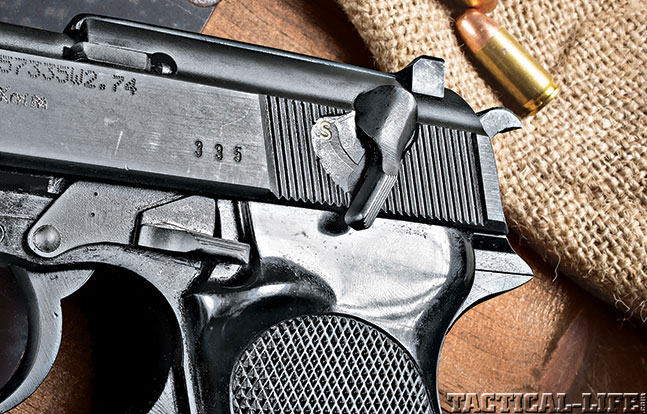 6 of 9
Examining the Post-War P.1 Walthers
The pivoting safety lever is located on the left slide of the slide within easy reach of the firer’s thumb. 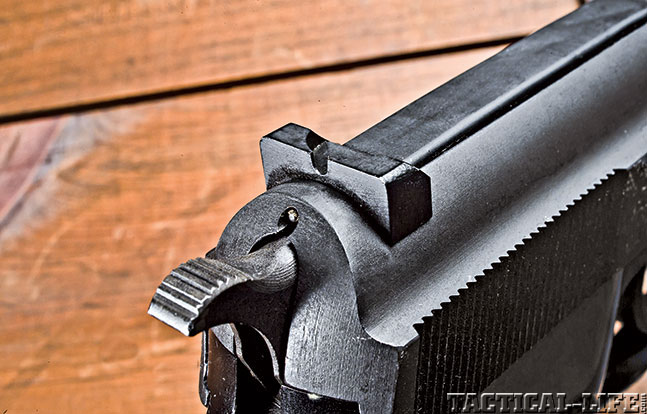 7 of 9
Examining the Post-War P.1 Walthers
The P.1 Walther has the P.38’s loaded-chamber indicator located above the hammer and below the rear sight. 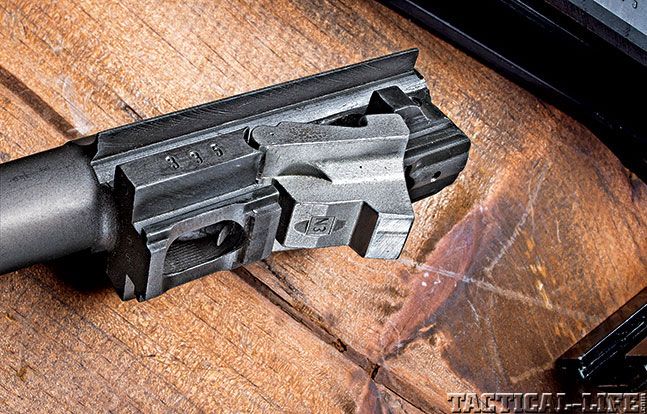 8 of 9
Examining the Post-War P.1 Walthers
The pivoting locking block helps make the P.38 a very rugged gun. Unlike most recoil-operated pistols that use a titling barrel, the P.38’s barrel travel is strictly linear. 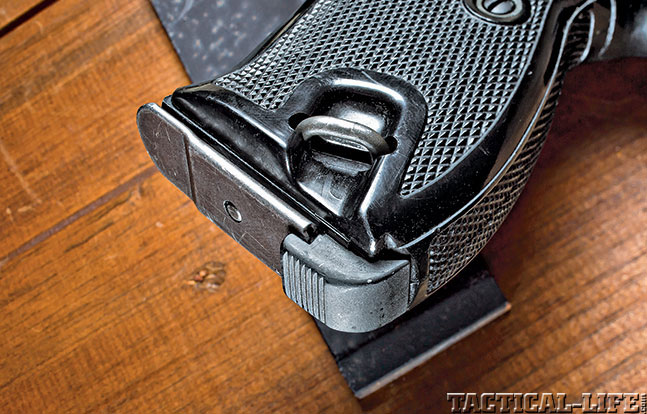 9 of 9
Examining the Post-War P.1 Walthers
The P.1 is in many respects a very modern design, but one antiquated feature is the magazine release lever at the butt of the frame. 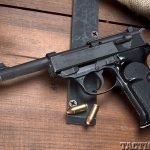 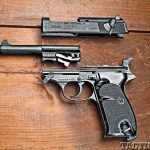 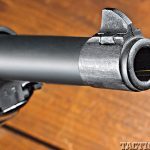 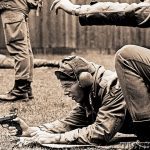 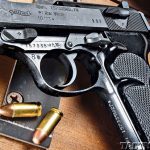 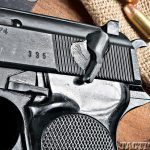 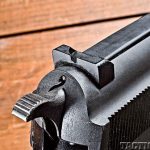 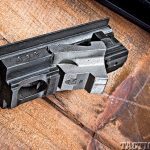 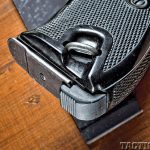 Fritz Walther, owner and lead designer for Walther Arms, created a number of semi-automatic pistols known for their elegant lines, compact size, reliable operation and revolutionary design. From the factory founded by his father, Carl Walther, in Thuringen, he created the legendary PP series of pistols, the first successful semi-automatics with a double-action (DA) trigger. Shortly after the PP series appeared on the market, the German Army let Walther know that it was starting a search for a new standard 9mm service pistol that would replace the P.08 Parabellum, better known as the “Luger.”

Seeing an opportunity, Fritz Walther quickly developed a series of designs that ultimately evolved into the world’s first DA semi-automatic military sidearm, the Walther P.38. It was also Walther’s first pistol in 9mm. His P.38 pistol was a simple, rugged design compatible with mass production. In fact, more than a million P.38s were made between 1938 and 1945. Moreover, the P.38 and its aluminum-framed successor, the P.1, remained in service with the German military and police, and around the world, for more than 50 years.

The P.38 is an interesting mix of the old and the new, or at least what was old and new in 1938. It used a proven short-recoil system of operation in which the barrel and slide recoil together over a short distance and remain locked together during the moment of highest pressure. After the barrel has moved rearward about 0.25 inches, the plunger at the rear of the barrel assembly pushes the locking block beneath the barrel assembly, out of its horizontal locking recesses in the forged steel slide. As the locking block falls into a corresponding recess in the frame, it halts the rearward movement of the barrel assembly. The slide, however, continues its rearward travel guided by rails milled into the forged steel frame. An external claw extractor on the left side of the slide and a pivoting blade ejector pinned to the right side of the frame extract and eject the spent case. A detachable box magazine housed in the grip frame feeds a fresh round into the chamber via a feed ramp milled into the frame. After the slide cocks the P.38’s external hammer, a pair of horizontally opposed recoil springs nested beneath the guide rails drives the slide and barrel assemblies back into battery.

“While the P.38 as adopted by the German Army came with Bakelite grips, which were produced in both black and brown, these post-war P.1s had black plastic grips with molded checkering.”

The pivoting locking block helps make the P.38 a very rugged and reliable gun. Unlike most recoil-operated semi-automatic pistols, which use a titling barrel that drops out of battery, the P.38’s barrel travel is strictly linear. The position of the external ejector on the left side of the ejection port is another oddity. The shooter is unlikely to notice this during firing, however, given that the slide is almost skeletonized forward of the breech face. This allows a great deal of space for case travel during ejection. In fact, cases ejected from a P.38 pistol tend to follow a vertical, rather than a lateral, trajectory.

A stamped-steel sliding magazine release is located on the heel of the frame, at the rear of the magazine well. The magazine is a single-column design that holds eight rounds. Index holes cut in the side of the stamped steel magazine body show the number of loaded rounds remaining in the magazine.

On the left side of the frame there is a slide-stop lever at the top rear of the trigger well. It is partially fenced by an abbreviated thumb shelf that is molded into the grip panel. The slide stop is also automatically engaged by a rising magazine follower, so the slide automatically locks open after the last round is fired.

At the top of the hammer well is a loaded-chamber indicator that consists of a pin that projects from the top-rear of the slide when there is a round in the chamber. The pin is relatively small and unobtrusive, but it is large enough to be seen or alternatively felt in the dark.

In an effort to save weight, the P.38 design used a frame without a backstrap. The backstrap was formed by a pair of grips that wrapped around the frame in a clamshell fashion, which helped protect the mainspring, trigger bar and other internal components.

At the end of World War II, the Walther factory was overrun by the Red Army and wound up in the Soviet occupation zone. Fritz Walther, designer of the P.38 Walther and son of founder Carl Walther, was left with little more than his drawings and patents. With his factory behind the Soviet “Iron Curtain,” Fritz Walther chose to start over again by setting up shop in Ulm, which is just southeast of Stuttgart in southern Germany.

“A shooter with a proper grip will notice a heavier ‘push,’ but I found the difference in control to be marginal.”

In order to equip the new West German Army, which was reformed and renamed the Bundeswehr, Walther resumed production of the P.38 (renamed as the P.1) in 1957. With little in the way of production facilities, Fritz Walther set up a cooperative endeavor with Manurhin, a French manufacturer in Strasbourg, which is right on the French border with Germany. The alliance with Manurhin was critical in that it gave Walther access to metal forgings. At the same time, Walther started making guns for the commercial market.

Walther substituted the P.38’s steel frame for an aluminum frame to reduce weight. While the P.38 as adopted by the German Army came with Bakelite grips, which were produced in both black and brown, these post-war P.1s had black plastic grips with molded checkering. As with the original, the P.1’s sights are excellent. The rear sight is broad blade with a deep U-shaped notch, while the front is a tall post. Both are fixed, but easy to acquire.

The new P.1 was adopted by the Bundeswehr as the P.1. Despite the name change, the guns from the first six years of production were still marked P.38. This was probably because they had already been stamped P.38 for the commercial market. In 1970, Walther improved the P.1 by reinforcing the aluminum frame with a steel hex bolt. It also beefed up the slide with thicker dimensions, but its contours remained nearly identical. Additionally, Walther refitted or upgraded many older P.1s with these features. The P.1 was the standard sidearm of the Bundeswehr and Bundespolizei until the turn of the century.

In the past, P.1s were imported by Interarms, but they are currently available from Century Arms. They make great shooters, and if you find one in good condition it can be an excellent choice for a low-cost self-defense sidearm. Just recently, Century sent me a P.1 that was re-chambered for 9x21mm.

The 9x21mm has a following in countries where ownership of firearms chambered for military calibers is severely restricted or completely prohibited. The 9x21mm is compatible with 9mm mags, but the two rounds cannot be used interchangeably. Ballistic performance between the two is fairly equal. In my experience, 9x21mm ammunition comes and goes, but it is far from scarce. That said, you need to pick it up when you see it. I managed to score a couple of boxes of 9x21mm from Fiocchi at a local gun show.

My test gun proved to have a good trigger pull. There was just a little take-up at the start and a little creep just before the break, but no stacking. Most importantly, it was very consistent. The DA pull was stellar—short with a crisp let-off. My groups were dead on windage-wise, but about 3 inches high at 15 yards. It is a well-balanced gun with an ergonomically shaped grip, and even though I find the extra weight of the P.38’s steel frame makes shot-to-shot recovery easier, that doesn’t mean that the lighter P.1 is unmanageable. That said, the extra recoil transmitted through the aluminum frame, combined with the extra energy of the 9x21mm chambering, will break down a grip that is less than solid. A shooter with a proper grip will notice a heavier “push,” but I found the difference in control to be marginal. The extra recoil energy did not hamper my endurance on the range. In fact, I ran out of ammo long before I tired of shooting the P.1.

By any standard, the P.1 and its parent, the P.38, are important benchmarks in firearms history. The P.38 was Walther’s first pistol in 9mm and the first DA semi-automatic pistol adopted by a military service, while the P.1 was the first military issue semi-automatic handgun with an aluminum frame. Both share a simple, rugged design compatible with mass production. They are proven performers having remained in service with the German military and police for more than 50 years, so they present students of firearms design with a rich collecting field. These German surplus P.1s have been on the market for many decades, and the well is starting to run dry. So, if you are interested, the time to buy is now. 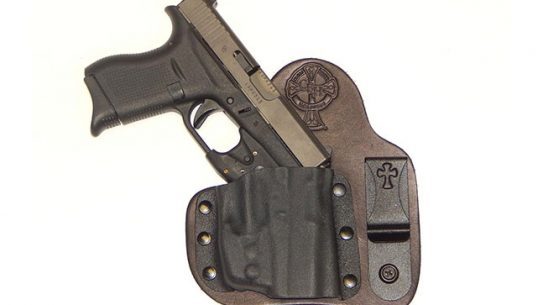