by William Bell
in Uncategorized
0

Heckler & Koch is one of the leading manufacturers of law enforcement small arms in the world. Their pistols, submachine guns and rifles have been the weapons of choice for many police and government agencies, as well as special operations units around the globe. In the U.S., HK firearms can be seen on the duty belts of officers, in patrol and tactical vehicles, or in the batteries of local, state and federal law enforcement organizations. Speaking of federal agencies, HK was awarded a contract in 2004 from the U.S. Department of Homeland Security (DHS) to supply handguns to all organizational elements up to a maximum quantity of 65,000 pistols. This was the largest handgun procurement contract ever awarded by a U.S. law enforcement organization and included the USP Compact LEM, P2000 and P2000SK models.

Today, HK arms law enforcement and security organizations the world over with pistols like the P2000, USP and Mark 23; submachine guns such as the famous MP5 and the more recent UMP; and rifles like the G36 and HK416. There are even special-purpose HK sniper rifles, machine guns and grenade launchers. About the only thing they don’t make is a shotgun. I have been carrying an HK P2000 in .40 caliber for several years now, both on and off duty. It took me a little while to warm up to it, as I was happy with my former service pistol, but after a while I began to see its advantages—one being its more compact size, making it less of a burden for off-duty carry.

Two new service-type pistols from HK really impressed me. The first is the HK P30S. This pistol is what I regard as an improved version of the P2000. My biggest complaint about the P2000 is the ambidextrous magazine release—not so much the fact that you have to push downward on it rather than inward to drop the magazine, but when you combine that with its miniscule size, it’s bad news to me. The magazine release on the P30S is both bigger and better designed. 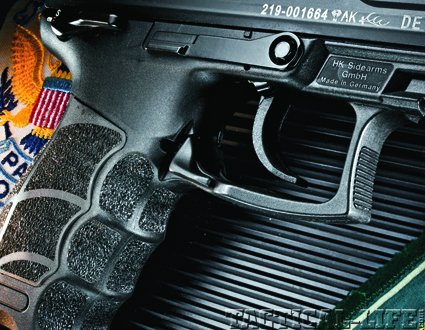 The grip on the P30S is also more ergonomic than that of the P2000. There are more knurled sections for a firmer grip, along with memory grooves, and if you are less than happy with the grip out of the box,
you can replace the backstrap and side panels to get the most optimal size for your hand. The Picatinny rail on the dust cover has more locking points than that on the
P2000, and to top it off, you get a 13-round magazine with the P30S as opposed to the 12-rounder in the P2000. All of this comes with a modest gain in overall height (5.04 versus 5.43 inches) and around 1.6 ounces in added weight with an empty magazine.

My P2000 is equipped with the HK Law Enforcement Modified (LEM) trigger, which is DAO, so there is no spur on the external hammer. The LEM trigger gives a smoother and lighter pull (6.2 to 8.5 pounds), with a “second pull” capability that is heavier because the slide does not cycle and reset the LEM mechanism. The P30 series can also be had with this trigger, or it can have a conventional DA/SA trigger with an external ambidextrous safety and decocker, as on my test P30S. I shoot well with the LEM trigger, but I also like the option of a single-action mode, so both guns are pretty evenly matched trigger-wise. The ejection port on the P30S slide is opened up a bit more, and the front sides of the slide are serrated.

My sample gun has fixed three-dot sights; the rear sight is huge—my service P2000 has fixed tritium night sights and the front and rear sights on both guns are dovetailed into the slide. Other commonalities are a polymer frame, non-reflective matte finish, and German quality throughout.

An interesting sidenote is an endurance test that was conducted not too long ago with a LEM-trigger P30 in 9mm. Beginning in May 2009 and over a period of 11 months, 91,622 rounds were fired through this one pistol. We are talking full-powered service ammo from eight different makers, sometimes fired at a rate of 350 to 550 rounds per hour, with 512 total range hours and 110 range trips. The gun was cleaned only 13 times (over 5,700 rounds between cleanings) and just three parts had to be replaced—all were springs. On March 11, 2010, at around the 86,000-round count, a tester noticed a small piece of polymer-covered metal was missing from the frame. More than 5,000 additional rounds were fired with no complications, but it was decided to end the test—even though the HK technical staff believed the gun could safely go a full 100,000 rounds. 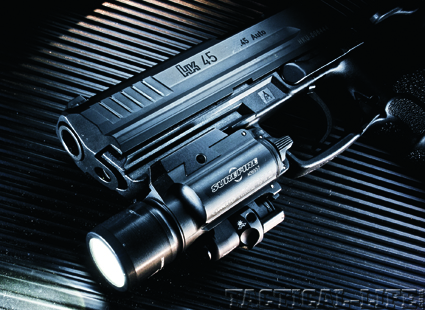 The other HK pistol I spent some time with at a recent trade show was the HK45. It was intended to be an improvement over the mid-1990s USP45 and was initially developed for military service trials. It looks a whole lot like the P30S, only bigger. That .45 hole in the barrel calls for a heftier slide and frame to the tune of 1.73 versus 1.63 pounds with an empty magazine, an overall length of 7.52 inches versus 6.99, and a height of 5.83 inches versus 5.43 inches. The HK45 also did not have an ambidextrous safety or a decocker. Only the backstrap was replaceable with bigger or smaller housings and the triggerguard curved back at an angle in the front. Less noticeable was the wide trigger and a magazine that holds 10 rounds of .45 ACP.

Another thing I noticed while comparing the sample P30S and HK45 was the DA/SA trigger pull on the HK45; it seemed to be a bit heavier in both modes. After trying both SA and DA several times, I finally attributed the HK45’s heavier pull to its increased size—the P30S just fit my hand better. Because of this, I decided to put the smallest backstrap on the HK45. Taking a 0.38-inch punch and a small ball-peen hammer and driving out the roll pin at the bottom of the backstrap can easily accomplish this. With the pin (which also serves as a lanyard loop) removed, you just slide the backstrap down and off and put on the smaller/larger version. The same is true for the P30S, except after you have removed the backstrap you can also slide the side panels out of the back and replace them with smaller/larger panels if desired. The grip angle on the HK45 matches that of the venerable M1911, and there’s an internal mechanism that reduces recoil by as much as 30 percent, which increases rapid-fire controllability and decreases wear and tear on the weapon to extend the useful service life of components. 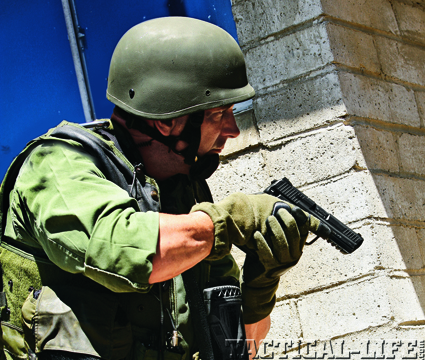 The barrel on the HK45 is also a bit longer than that on the P30S or the P2000, measuring 4.53 inches, as opposed to 3.86 and 3.66 inches respectively. An attribute that they share is cold-hammer forging for strength and polygonal rifling. Unlike traditional rifling that consists of lands and grooves cut into the barrel’s bore, the polygonal bore is formed as the barrel is produced and has the advantages of increasing bullet velocity, reducing bore wear and making cleaning easier. Unique to the HK45 is the O-ring fitted to the barrel exterior near the muzzle. This high temperature- and stress-resistant rubber ring helps keep the barrel centered in the slide during firing to enhance accuracy. Extra O-rings are supplied with each HK45 and can be easily replaced.

A few other items that bear mentioning are the safety features on the P30S and HK45. The DAO models with LEM triggers do not have any conventional manual safety like the P30S and the HK45; none of these pistols have a magazine safety, so all can be fired if a round is in the chamber and the magazine is removed. Inside the magazine well, near the bottom on the rear surface, is a lockout device. It is activated by use of a small two-pronged key supplied with each P-series pistol. When engaged, the device locks the gun’s action by blocking any movement of the trigger, hammer and slide. Both my sample HK45 and P30S had this feature; my agency-issued P2000 had this device deactivated.

After the success of the endurance test on the P30, the decision was made to try it again, this time with the HK45. There were some early qualms about so much shooting with a hard-kicking, big-bore round, but the project got the green light and shooting began in April 2010. Again, there were long periods between cleanings and about 520 rounds were fired per shooting session. The test HK45 fired 31,522 rounds before the first malfunction was recorded. All told, there were three stoppages: a light primer hit, the sear spring came loose, and the trigger return spring broke. None of these problems would have completely stopped the HK45 from functioning. When 50,000 cartridges had been fired through the test gun on December 15, 2010, it was still capable of shooting a 1.85-inch five-shot group at 25 yards! By the way, the HK45 is the first HK pistol to be made at their new manufacturing facility in Newington, New Hampshire, in America.

Either of these two guns will give exemplary service in the holster of a law enforcement officer or anyone who chooses to use them for legitimate self-defense or sporting purposes. For more information, visit hk-usa.com or call 706-568-1906.