Field artillery is known as the “King of Battle” for good reason. From the Napoleonic Wars until modern times, artillery has been by far the most effective and deadly land-based weapon, killing and wounding far more soldiers than infantry, cavalry or later, armor. After he learned of its effects on invading German armies in World War II, Soviet dictator Joseph Stalin, officially an atheist himself, elevated artillery from royal to divine status, calling it “the God of War.”

Today’s M777 lightweight howitzer can fire conventional rounds about 15 miles with a circular error probable (CEP) of 200 to 300 meters. CEP is a measure of accuracy that predicts half of the rounds fired at a specified range will hit within a defined radius around the intended target. While standard artillery is not inherently precise, artillery units employ tactics to ensure target destruction. 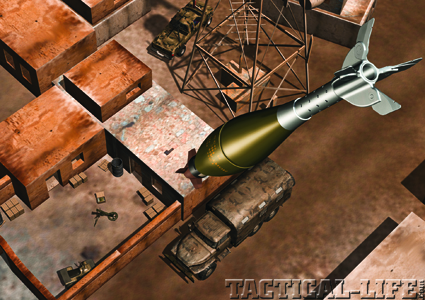 An ATK illustration shows the Accelerated Precision Mortar Initiative 120mm round closing in on the target.

A common tactic is firing a salvo of many rounds to ensure that the projectile’s lethal radius accomplishes its mission. This tactic is awe-inspiring, since the explosive capability and lethal range of modern rounds virtually guarantees target damage or destruction. However, in many combat situations, artillery’s combat dominance has proven to be limited because it is not precise enough to avoid collateral damage. Consequently, artillery has not played a major role in counter-insurgency warfare when adversaries use noncombatant populations as shields or simply operate in congested areas where they are hard to identify.

Given all the improvements already incorporated to achieve accuracy, one developmental area remained: artillery rounds themselves. To reach this objective, researchers looked for ways to apply technologies similar to missile guidance systems. In barely more than a decade, these efforts succeeded, putting artillery back in the fight. As Rollie Dohrn, ATK Armament Systems chief engineer, noted recently, “New guidance systems are the first major technology breakthrough in artillery since the development of variable time fuzes during World War II.”

Today, incredibly accurate ordnance is hitting targets in Afghanistan with high precision and near precision, thanks to ATK and Raytheon, both major U.S. defense contractors. According to Dohrn, accuracy research began in the late 1990s and early 2000s. The goal was to provide low-cost, near-precision systems. Near precision is defined as a CEP of 50 meters, which means half the rounds fired at a target will impact within a 50-meter radius of the target point. Precision is about an order of magnitude better, with a CEP of 5 to 10 meters from the target point. Although artillery had used just one dimension, range, to correct fire, ATK began to focus on a two-dimensional, range and azimuth correcting mechanism during initial system development, an initiative that led to the Precision Guidance Kit (PGK).

The PGK concept incorporates GPS guidance in a modified fuze that screws into a standard 155mm artillery projectile’s fuze well. The PGK contains a power source and has just one moving part, ensuring high reliability and enabling the projectile to maintain at least 90 percent of its standard range capability and hit within a 50-meter CEP of the aim point. Gunners operate PGK much like standard ordnance, loading ballistic trajectory coordinates into the PGK with an M1155A1 Enhanced Portable Inductive Artillery Fuze Setter. The fuze setter uses the standard NATO Armaments Ballistic Kernel (NABK) algorithm to compute GPS and fuze setting data, giving the round two-dimensional guidance from launch to impact. Dohrn explained that ATK relied heavily on advanced design systems to create PGK within the Army’s budget and schedule constraints. 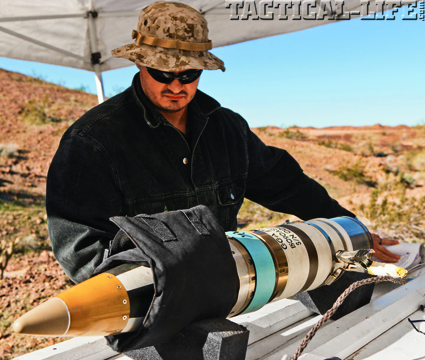 “We faced two very significant technical issues, and neither one was simple to solve,” Dohrn said. “The first is packaging. We squeezed everything into the fuze. What we had to do was take an existing artillery fuze and add the ability not only to guide it but also to generate and manage power for a tiny computer processor to provide GPS guidance. In addition, we needed to add rotating canards for maneuverability. We fit all this into a fuze package that increased the standard fuze length by just 1-inch.

“The second major technical hurdle was the physics of the problem,” said Dohrn. “The key point is that all the forces involved in firing a projectile must be understood. For example, a golfer who hooks or slices knows what Magnus force is—the tendency of a spinning object to curve as it flies through the atmosphere because of differential drag acting on different segments of its surface. We compensated for Magnus force and other elements to achieve high accuracy.” ATK used next-generation testing to create a solution that removes errors associated with launches and corrects for natural forces acting on artillery projectiles. “When we load the fuze, we know where we are and where we’re going,” Dohrn commented. “The fuze setter’s calculated trajectory becomes the projectile’s reference. Then GPS data provides data on course deviations that enables the projectile to correct errors in real time during flight.”

The PGK’s success led ATK to develop the XM395 Accelerated Precision Mortar Initiative (APMI), a quick-turnaround effort that installed PGK fuze-technology into the M121 Battalion Mortar System’s 120mm projectiles. The APMI also incorporates fins on the mortar round because standard projectiles don’t spin when fired. The kit’s spinning fins enable the fuze to function as a two-dimensional corrector and also make the round more stable in flight by reducing the wobble of standard mortar projectiles. This enables the projectile to achieve less than 10-meter CEP at maximum range.

Near-precision projectiles have vastly improved artillery’s capabilities, but precision ordnance also is available—and supremely deadly. The projectile is Raytheon’s M982 Excalibur, a 155mm round for the M198 and M777 towed howitzers, the M109A6 Paladin self-propelled howitzer and future artillery systems in development. 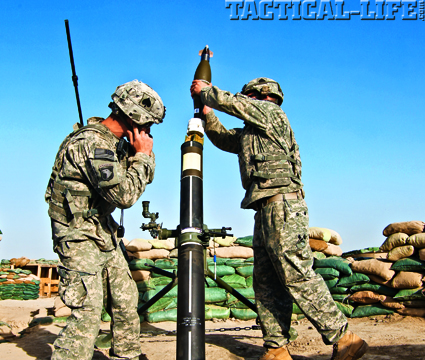 Rene Kiebler, deputy project manager for combat armament systems in the U.S. Army Program Executive Office (PEO), Ammunition, said, “Normal artillery projectile dispersal at a 30km range has a CEP of 274 meters. With Excalibur, dispersal is less than 10 meters. Our accuracy requirement is a threshold of 30 meters CEP.” Although he will not disclose the projectile’s lethal radius, he added, “Accuracy of less than 10 meters CEP is well within the lethal range of projectiles, while 250 meters is well outside the lethal range. This is an obvious improvement.”

Kiebler noted that Excalibur’s high accuracy is having “a great effect” in the field. This translates into a large decrease in the number of rounds fired. “With Excalibur, we have first-round effects on target,” he explained. “This accuracy has eliminated the need for mass fire, something we simply cannot do when collateral damage is a concern.” Kiebler added that Excalibur has reduced the danger of close fire missions when friendly troops are located near aim points. “During urban close-quarter combat, when enemy forces retreated into buildings, conventional artillery could not achieve the accuracy needed to neutralize them,” he said. “The alternative would be to send an infantry squad house to house, find targets and attack, endangering our troops. Excalibur can be fired with perfect effect. The projectile will penetrate a specific structure and detonate inside.”

Excalibur also affects the enemy’s mindset. “We don’t want to create collateral damage, and the enemy knows that,” Kiebler explained. “Their assumption is we won’t engage. Today, Excalibur and PGK enable us to do that.

“We already have anecdotal evidence that proves the effectiveness of precision ordnance.” Kiebler continued. “A U.S. unit had engaged Al Qaeda and returned fire with 120mm mortars using APMI rounds. The enemy had already learned how accurate these rounds are at hitting their position, so as soon as they heard the rounds, they ran.”

The Excalibur system is similar to PGK, but Raytheon has utilized the entire projectile structure to incorporate its guidance system. Unlike PGK, however, Excalibur’s guidance system enables it to maneuver significantly off the projectile’s ballistic track after launching. “PGK is flying ballistically, nudging the projectile along the way to eliminate error,” said Kiebler. “Both systems use GPS, but Excalibur is computing its track to target continuously. That makes the Excalibur a more complex system that takes up more space in the projectile but also accounts for its greater precision.”

Precision ordnance does not come cheap. Raytheon is currently fielding the Excalibur 1A2 variant, at a cost of about $80,000 per projectile. The price goal is about $45,000 per round. PGK costs are around 15 percent of the Excalibur’s costs. This seems extraordinarily expensive when compared to standard artillery rounds that cost between $500 and $1,000, plus the costs of fuzes, propellants and accessories.

This comparison is not appropriate, however, because it doesn’t take into account the cost of American and noncombatant lives lost, not to mention those who suffer crippling wounds or injuries as well as repair or restoration costs for damaged property, when precision and near-precision projectiles are not utilized. In addition, the use of as many as 75 percent fewer rounds to achieve mission objectives saves time and money. Furthermore, the costs of immediately available Excalibur and PGK pale in comparison to close air support that might not even arrive in time to support operations that can expose friendly troops to potential disaster. Kiebler summed it up, “Excalibur and PGK work hand in hand, with complementary missions. They give us the flexibility to provide highly effective artillery support in combat operations while reducing collateral damage concerns. That’s a tremendous capability improvement, well worth the effort.”