0
SHARES
0
VIEWS
Share on FacebookShare on Twitter
The shooter’s view in the optic during the tag sequence. Press and hold down the tag button until a red dot appears. If the tag isn’t right, start over and press the button again

Project White Feather was an USSOCOM-sponsored effort to improve sniper weapon fire-control technology to help extend effective range and increase first-round hit probability. A white paper entitled Sniper Weapon Fire Control Error Budget Analysis (ARL-TR-2065) about the USSOCOM tests revealed that the standard deviation of aiming error for the best formally trained operational snipers was three times as great (meaning worse) as that of the high-power and long-range competition shooters who were tested. (Those shooters had competed successfully in national-level match competitions at Camp Perry and the like.)

In fact, the worst competition shooters tested were as good or better than the best snipers when it came to holding and shooting fundamentals. This was simply raw marksmanship fundamentals and didn’t take into account shot error caused by range, wind or environment estimations. The white paper also showed that, on 1,000-yard humanoid silhouette targets, the snipers had a 3-percent probability of making first-shot hits.
Familiarizing with the TTX sequence only takes a few minutes. The shooter can be monitored with an app running on a smart phone or tablet 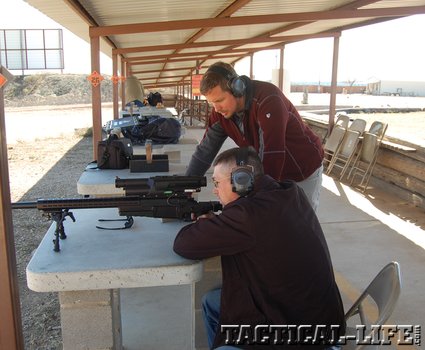 Precision-guided munitions, or smart bombs, typically enable the operator to make corrections to the projectile’s course after launch. They can be effective but have their problems. Keeping internal electronic components functioning after being subjected to accelerations thousands of times the force of gravity is considerably more complex than working a proximity fuze. And consider small arms: If it’s difficult and expensive to fit adequate electronics inside a 155mm explosive howitzer projectile 6 inches in diameter, it’s impossible to install guidance inside a bullet under a third of an inch across.