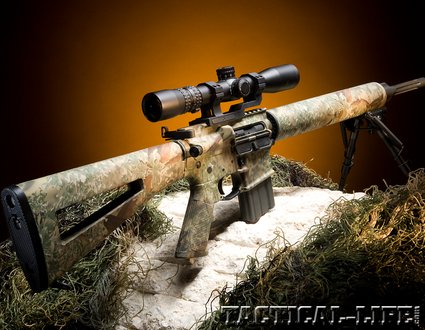 AR-Style rifles like this DPMS Prairie Panther have become as commonplace in coyote-hunting circles as camouflage and electronic game calls. Sean Utley photo

You won’t find much in the way of research, studies or census numbers on the growing trend, and number of predator hunters. Of course you don’t need those numbers to verify the explosion in the sport. You simply need to browse through any hunting magazine, firearm catalog, sporting goods store or plug the words “predator hunting” into an internet search engine. All affirm the popularity predator hunting has achieved in the modern hunting culture. Magazines devoted solely to predator hunting, social media focused on the sport, and firearm companies producing dozens of predator-specific firearms add to the evidence.

Like many of you that have high school graduation dates prior to the 21st century, your first predator rifle likely pulled double duty on big game. I hoodwinked my grandma out of her Remington model 700 ADL in .243 Winchester as my first dual-purpose rifle. She didn’t require much conning. She realized my fever for the sport of hunting and readily handed over the rifle. After removing the iron sights and having the action bedded, and barrel floated, the little .243 performed like a champ on fur and antlered game. 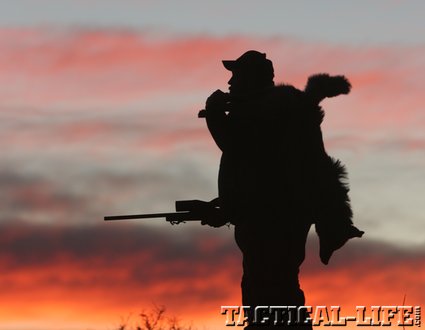 Regardless if you want a traditional semi-automatic, an AR-style tactical rifle, or a long-established bolt action, the market is flooded with great options for rifles and calibers that can slam coyotes with ease

Although the notion of an all-purpose firearm holds merit today with the questionable economy, there’s no reason to compromise if you have predators on the mind. Regardless, if you want a traditional semi-automatic, an AR style tactical rifle or a long-established bolt action, the market is flooded with great alternatives. Here are three to consider if you want to cramp a coyote’s style.

After the close of World War II, Bill Ruger opened the doors to the Sturm Ruger and Company plant and introduced the world to the Standard model .22 Ruger semi-automatic handgun. Two million Standards later and Ruger continues to bring new ideas to market with a tradition embraced by shooters. In 1966 Bill Ruger marketed a personal favorite of his, the No. 1 single-shot rifle. The falling-block design still attracts purists today, but he took a drastic turn in firearm design from single-shot simplicity to semi-automatic speed with the launch of the Mini-14 series of rifles in 1974. Quickly dubbed the “Ranch Rifle,” a name still used today, the Mini-14 now has more than two million units in circulation and has proven itself from ranch to law enforcement duties.

Although ARs grab the attention of many today with their black, military looks, the Mini-14 requires a second look if you’re shopping for a speedy predator rig. Unveiled in 2006, the Mini-14 Target rifle has undergone a series of major changes to offer coyote hunters MOA-accuracy in a conventional rifle format. If you want something with a bit more ergonomically friendly feel, take the thumbhole, laminated stock version for a test drive. 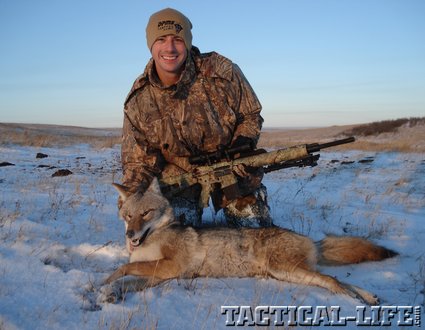 The heart of the Mini-14 is its dependable Garand-style action with breech-bolt locking system. A self-cleaning, moving gas cylinder ensures the firearm’s reliability for follow-up shots at the range and more importantly, while trying to tip over the second coyote of an incoming pair.

Although the original Mini-14 offerings sold well, a few diehard shooters grumbled about its long-range accuracy. The rifles were lightweight, rugged, reliable and basically the rifle equivalent of Snap-On tools, hence the Ranch Rifle designation. Seeing the need to win over the hearts and minds of precision shooting enthusiasts—like the predator hunting crowd—Ruger introduced the Target version and mated the tested action to a heavy, hammer-forged, stainless steel target barrel in matte finish. A recessed target crown, plus a weighted harmonic dampener at the end of the barrel, work together to produce tack-driving results with an appropriate load.

Of course predator hunters appreciate accuracy, but they demand a complete package. The Mini-14 Target rifle delivers. For lovers of natural wood the Mini-14 Target is available in a gray, laminated thumbhole stock complete with a vented handguard to aid in dissipating heat. A wide forend provides for benchrest stability or easy grip in the field. And if you want to fit the rifle to fit the varying size of shooters in your family, it comes with buttstock spacers to adjust the length of pull by 1.5 inches.

Wood provides great patterns for camouflage concealment, but some just love the feel of composite stocks. The Mini-14 Target is also available in a non-thumbhole, black composite Hogue Overmolded version. To ensure a firm grip a “cobblestone” texture is incorporated into the overall stock and the skeletonized design is covered with a soft synthetic. The result is a nearly indestructible stock that is impervious to most solvents you’ll likely encounter. The thumbhole version weighs in at 9.5 pounds and the composite model is 8.5 pounds. Every Target version comes with patented Ruger scope bases machined directly into the rifle and a set of Ruger rings. A five-round magazine rounds out the rifle package that retails for $1,099. 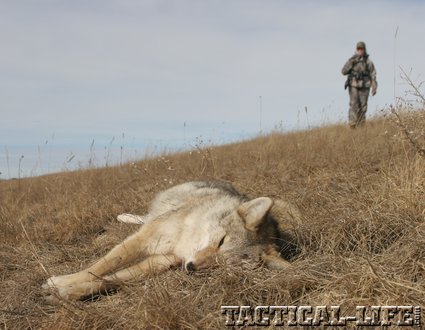 AR style rifles have become as commonplace in coyote hunting circles as electronic callers. The reason is simple. ARs are proven with decades of military service as witness. They are tested and dependable for the most rugged environments. Plus, you get the speed of semi-automatic cycling for additional shots on multiple coyotes or misses.

DPMS (Defence Procurement Manufacturing Services) Panther Arms started out as a small company producing firearm parts for Army contracts. Today the company has earned respect and is the second largest manufacturer of AR-15s, plus it holds four U.S. patents for pioneering AR-15 products. If you’re shopping for a coyote-killing AR, DPMS shopping is a must for serious hunters.

One of the advantages to perusing DPMS Panther Arms is their wide variety of caliber offerings in AR platforms. You can choose from traditional 5.56mm NATO/.223 Remington or go to relatively new calibers like the .204 Ruger and 6.8 SPC. If you want to beef up even more, DPMS offers ARs in .243 Winchester, .260 Remington, .308 Winchester, .300 Remington Short Action Ultra Mag., .338 Federal and newer offerings like the 6.5mm Creedmoor, and .300 AAC Blackout.

Even with the smorgasbord of calibers, it’s difficult to argue the effectiveness of the .223 Remington and the perfect model is DPMS’s Prairie Panther. If you want a bit more beef to possibly use it for deer or antelope, the Prairie Panther is also available in 6.8 SPC. The Prairie Panther weighs in at an average 7.15 pounds, but after that nothing is average. It sports a 20-inch 416 fluted, stainless steel barrel with Teflon coating. With a traditional composite stock and carbon fiber free-floating handguard, the Prairie Panther extends 38.5 inches keeping it manageable in the hunting arena, but maybe a bit unwieldy in the home-defense department. The upper and lower receivers are forged with the upper decked with an A3 flat-top ready for mounting the optics of your choice.

A two-stage match-grade trigger initiates firing, and the 1-in-8-inch twist fits many hunting loads suitably, plus the beefier coyote loads needed to dump a dog on the spot. The rifle arrives with a forend sling stud and a sling swivel at the rear. Two 20-round magazines and a nylon web sling round out your rifle order. If you dig camouflage over tactical black you can order the Prairie Panther in three shades: Mossy Oak Brush, King’s Desert Shadow and King’s Snow Shadow. These three models also sport a skeletonized A2 stock, although the overall weight is the same as the traditional Prairie Panther. The tactical looking Prairie Panther retails for $1,269 and add $20 more if you pine for camouflage. 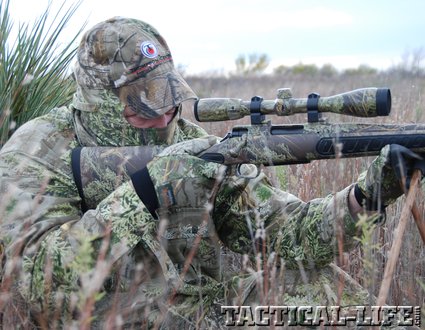 Regardless if you want a traditional semi-automatic, an AR style tactical rifle or a long-established bolt action, the market is flooded with great alternatives for rifles, and calibers, that can handle coyotes with ease.

One would be remiss if the traditional bolt action didn’t make it into the lineup. Ideal for hunting, the bolt action incorporates both extra cartridges and accuracy in one efficient foundation that the predator culture has adopted as the norm. Despite the bombardment of AR-15s into the predator hunting market, bolt-action aficionados haven’t been left out in the rain. The Remington SPS Varmint, the Savage Lightweight Varminter, the Mossberg MVP and a host of others were designed for one job: varmint and predator hunting. Each year new bolt actions land on store shelves to compete with the growing number of ARs meeting predator hunting demands.

If you’re looking for a deal then Thompson Center has one via their Venture series of rifles. First offered in 2009, the Venture model was introduced for hunters looking for money-savings options to pair them with an accurate firearm. It entered the market with a guarantee to shoot MOA groups for $500 or less, and they stand behind that guarantee with most buyers happy with the purchase. A recent recall on Ventures created some grumbling amongst the shooting public, but T/C addressed the issue speedily and sales continue. The Venture Predator is definitely a bargain when it comes to accuracy in a reliable bolt-action firearm.

Accuracy comes via TC’s 5-R rifling, a match-grade muzzle crown and the adjustable trigger with a range of 3.5 to 5 pounds. The barrel is free floating and available in 22-inch lengths in Realtree Max-1 configurations and also a 20-inch Predator model in Realtree AP Snow version, new for 2012. In the 22-inch barrel configuration you have your choice of .204 Ruger, .223 Remington, .22-250 Remington and .308 Winchester. In the snow camouflage version you have options for .22-250 Remington, .243 Winchester, 7mm-08 and .308 Winchester. A black, nitride-coated bolt aids in cycling cartridges with a short, 60-degree lift. Aluminum pillar bedding rounds out the receiver and a detachable, composite magazine holds three cartridges.

All models sport a lightweight composite stock with Hogue panels positioned on the pistol grip and forend for maximum hand traction. All models and calibers weigh a practical 6.75 pounds. All models also come complete with Weaver-style scope bases installed at the factory. T/C’s Venture Predator model comes with a lifetime warranty for the original owner and if for some reason yours won’t shoot accurately, send it back. So far that hasn’t been a problem with the public agreeing that Venture accuracy is a steal for the price.