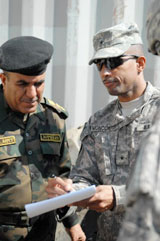 BAGHDAD – As security stabilizes, the Iraqi Army engineers are asking questions that only a year ago seemed far from anyone’s thoughts.

How will we get the hundreds of new engineer troops trained? When will we get our equipment fielded?

Leadership of the 225th Engineer Brigade, 1st Cavalry Division, Multi-National Division-Baghdad, met with the 6th Iraqi Army Engineer Regiment Commander Col. Ahmed Saddam March 4, at Al Muthana Airfield, Baghdad, to address these issues that will either hinder the success of, or establish credibility for, the IA engineers in the days after the Coalition forces withdraw.

Ahmed briefed Monconduit on some of his missions since their last meeting, highlighting gains in mobility which the people of Baghdad appreciate.

“We’ve been focused on opening a lot of roads in Baghdad due to improved safety,” Ahmed explained. “The list of roads, some are already finished, some are still being worked on.”

Ahmed explained collaboration with the Baghdad Provincial Council provided a crane to lift the concrete barriers from the roads because the crane he had was too small to lift the barriers.

Struggles any military faces, including funding, equipment shortages and transportation of supplies were emphasized repeatedly by the Iraqi commander.

With the 19-month timeline on everyone’s mind, Ahmed intends to maximize training opportunities on construction missions before the American forces are significantly reduced next August.

“I’ve spent 26 years in the Iraqi Army. I have gained more experience in the last four or five years, than in the previous 20,” he said.

Within the month, the IA engineer plan will add an additional 400 new Soldiers to their ranks, he explained. Training the Soldiers on carpentry, masonry and other engineering skills is crucial to the long-term success of the IA engineers.

“I taught the Soldiers to do things on their own without supervision. I’ve shown them how to work, like the Americans,” Ahmed said.

Training needs have not gone unnoticed by Lt. Col. Matthew Zajac, commander of the 46th Engineer Battalion, 225th Eng. Bde., from Fort Polk, La. Since last July, Zajac’s Soldiers have worked side-by-side with the Iraqi Engineers to give hands on training to Soldiers that have limited experience and formal training.

Zajac explained the Iraqi Army has only recently had the luxury to concern themselves with jobs other than security missions, such as building maintenance and concrete operations. He said significant progress will be made once the unit receives the authorized engineering equipment package this summer.

“The greatest boost will occur August 2009, when they receive unit sourcing of equipment … they will be able to do their job,” said Zajac. “There’s a lot of latent skill within the IA Engineers.”

“The willingness to work with us has always been there,” he continued. “With respect to the Security Agreement and troop withdraw … newer units realize there’s a limited time to benefit from our experience and example.”

Monconduit told the Iraqi engineers that training on the equipment they will receive in August is paramount to their success.

“Partnership is a team effort; … we want to enable you to be highly capable to perform engineering operations,” Monconduit said. “Like an agreement, you send Soldiers to [training], and fielding [of engineer equipment] will be realized in August.”

The partnership between Iraqi and U.S. engineers has the same goal: solve the training and equipment tribulations restricting growth of IA’s skill set in engineering capacity.

“If you are trained as a plumber, but don’t have a plumber’s tool kit … your new skills will fade quickly,” Zajac said. 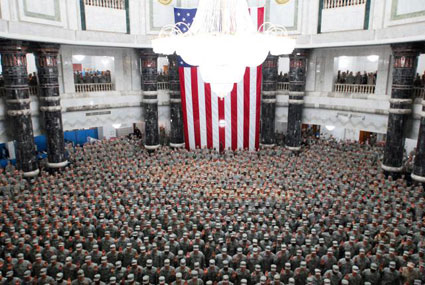 BAGHDAD - As security stabilizes, the Iraqi Army engineers are asking questions that only…