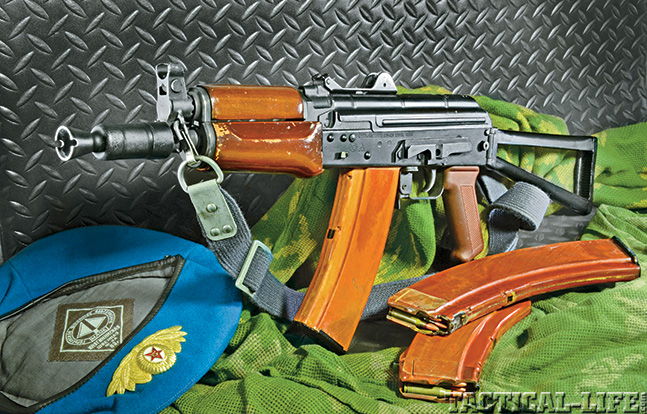 The AKS-74U, which offers 5.45x39mm power in a package not much larger than many submachine guns, proved to be quite popular with special operations troops.
Comment(s)

For the 2014 AK-47 & SOVIET WEAPONS, Leroy Thompson put his impressive Cold War knowledge to work through his examination of the AKS-74U, a compact AK variant. During a trip to Russia 15 years ago, Thomspon made an astute observation involving the AK-type rifle. According to Thompson: “…You could  tell how hardcore the police units were by whether they  had 5.45x39mm AKS-74Us.”

Compact like a submachine gun but chambered for 5.45mm ammo, the AK74U provided a middle ground between tactical rifles and pistols. “It also gave its users more striking power than a pistol-caliber weapon,” says Thompson. “In many ways, the AKS-74U filled the same niche as the HK53, Sig 552 or Colt Commando did in the West.”

According to Thompson, “the starting point for the AKS-74U was the full-sized AKS-74 rifle. However, the shortened barrel required the gas chamber be moved rearward and the gas piston rod be cut down.” The rifle also featured a muzzle device that functioned as a gas expansion chamber and a flash suppressor.

The AKS-74U also offered numerous tactical features beyond its firepower to troops and law enforcement employing it in the field. “One very clever aspect of the flash suppressor is that it is slotted so that it can be used as a wire cutter by sticking the wire through the two slots and firing a round,” notes Thompson. “Watching where one’s foot is located during this is highly recommended.”

For more information, check out the 2014 AK-47 & SOVIET WEAPONS, available on newsstands January 21, 2014. For your copy, visit https://www.tactical-life.com/subscribe/ak-47-soviet-weapons/. 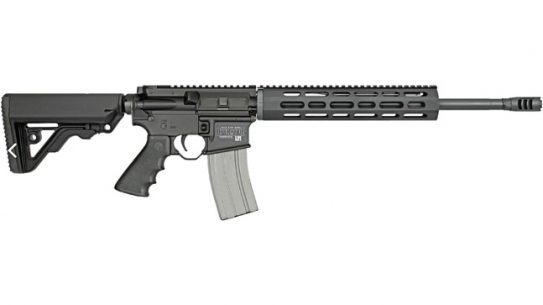 Rock River Arms have announced the release of the LAR-15 Operator III in 5.56mm.