Custom AK kits have played a significant part in the renewed interest among American collectors toward the AK-47 and its variants. For collectors, these kits allow them to hold (and fire) rebuilt relics from the Cold War. For the 2014 AK-47 & SOVIET WEAPONS, Michael Humphries investigated one such kit, the BAKM-74SP, and its builder, Steve Palano from Barlow’s Custom Guns.

“The BAKM-74SP may not have the grabbiest name, but it’s the features and performance that will grab you,” says Humphries in his review. “Developed by Steve Palano at Barlow’s Custom Guns in Utah, a talented gunsmith and combat vet who lives and breathes AKs, the BAKM-74-SP is based on the more recent AK-74 version of Kalashnikov’s baby, in 5.45x39mm caliber.”

Barlow’s AKM-74-SP starts out with an Interarms Bulgarian core and combines that with a U.S.-made 16.25-inch barrel, a rear tangent sight, and a Russian-style AK-74 muzzle brake, among other features. Barlow’s many unique modifications to this core left Humphries impressed with the build.

“If you were majorly observant, you probably also noticed the trigger. Another Palano modification, it’s been straightened and the trigger and hammer engagement angles altered. Again, not quite as simple as it sounds in print, the net result is something that AK people will have to try in person to believe,” says Humphries. “When you’re used to the long and leisurely roll-through on a conventional AK trigger pull, this rifle removes at least half of the travel before let-off, shortens the reset correspondingly and can ruin you for any other standard AK trigger for life.”

At the range, Humphries notes how Barlow’s design modifications make improvements where it ultimately counts—on the firing line. “The trigger was a huge improvement to work with on both slow and rapid-fire testing…the left-side bolt handle and modified safety are worth the buy-in all by themselves in my opinion, and storage capacity in the oversized grip for things like a broken shell extractor is a definite plus. In total, the BAKM-74SP takes the AK miles beyond any other version I’ve ever spent quality time with.” 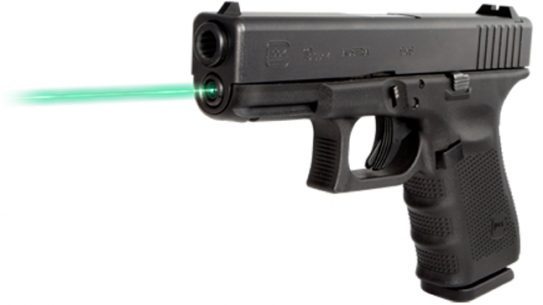 Tactical-Life.com takes a look at some of the best new lights, lasers & optics...