by Matt Berger
in Uncategorized
0

0
SHARES
6
VIEWS
Share on FacebookShare on Twitter
The MK216 gives tactical units the accuracy and ergonomics of the AR platform, the unstoppable reliability of the AK’s long-stroke piston system, and puts the performance of the 7.62mm round on target.

In the world of tactical rifles, there’s very little that’s really new, save for the trend of modularity and ambidextrous controls found in innovative weapons like the FN SCAR and Bushmaster’s ACR. Despite these features, the operating system for both weapons still utilizes the gas piston principle, and nothing is new about that. The gas piston gun goes as far back as John Moses Browning, the designer of the M1895 Colt-Browning machine gun. The Nazi StG 44 also made use of a gas piston, as did the AK-47, which was being developed in the last year of WWII.

Though the basic gas piston design predates the AR’s direct impingement system, it’s the superior of the two in more ways than one. While the direct gas arrangement dumps all of its waste and gases into the mechanism of the weapon (bolt, carrier, locking lugs, etc.), the gas piston contains all of this waste to itself and its gas tube. Consequently, it isn’t remotely as susceptible to dirt and fouling and will typically run much longer and more reliably without cleaning. Most gas piston guns have fewer parts and require a fraction of the maintenance time. 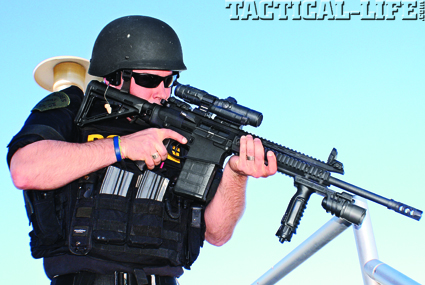 The barrel is fitted with the PWS FSC30, which serves as both a compensator and flash suppressor. The Aimpoint CompM4 red dot sight and 3x Magnifier paired nicely with the MK216.

Applying the gas piston to the AR platform isn’t a new idea, either. ArmaLite did it with the AR-18 as far back as 1963, and though the AR-18 never gained ground on the AR-15 and M16, it was an extremely reliable weapon.