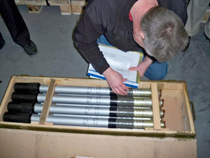 PICATINNY ARSENAL, N.J.– The Army has made significant changes to the processes used in procuring non-standard ammunition that have resulted in improved reliability and quality.

The changes have resulted in millions of rounds of more reliable, effective munitions delivered to Iraq and Afghanistan in quality packaging during the past six months, according to William J. Sanville, project director of Non-Standard Ammunition at Picatinny Arsenal, N.J.

Non-standard ammunition describes munitions that aren’t stocked, type-classified or safety-approved for use by U.S. forces.

Sanville, named project director in October 2008, works closely with the JMC Security Assistance to streamline the procurement and management of non-standard ammunition for the Army under the Program Executive Office for Ammunition.

It began in April 2008 as a special task force with members from the PEO Ammunition and JMC; Armament Research, Development and Engineering Center, known as ARDEC; Army Sustainment Command, and Defense Contract Management Agency. The task force was created to review and develop new Army procedures for acquiring and managing these munitions. It has now transitioned into a project office responsible for bringing standards similar to those used to procure and manage standard Army ammunition to the non-standard process, Sanville explained.

Sanville said that the Army’s process for buying and managing standard ammunition is very effective.

Sanville also said the Army has brought more discipline to the acquisition process through a variety of organizational, process and standard changes.

“Non-standard ammunition procurement is now an “eyes on” procedure,” Sanville said, noting that the Army now has more personal contact with industry partners and the overseas manufacturers of these munitions.

“We inspect the ammo in the plant, long before it’s ever shipped to Afghanistan or Iraq,” he explained.

Sanville is referring to the policy that all non-standard ammunition items bound for Afghanistan and Iraq must undergo Defense Contract Management Agency quality assurance inspections prior to shipment.

“Instead of managing these munitions from an office, we personally go out to where the ammo is,” he said.

“With these new procedures, we’re verifying compliance to quality standards prior to delivery of ammunition,” he said.

Since the process was streamlined under PEO-Ammunition, six non-standard ammunition contracts, three of which were urgent, have been awarded through the Rock Island Contracting Center, Sanville said.

“But to me the most important indicator of success is that quality, effective ammunition is being delivered to the Afghan and Iraqi Security Forces,” he said. “Afghan pilots, for example, conducted the first air-to-ground gunnery training in eight years.”

While Sanville said he’s pleased with the improvements, he knows the process is still evolving.

“There’s always further room to get more detail,” he said. “As we continue to gain knowledge, we’ll feed that into the process of how we do it.”

PICATINNY ARSENAL, N.J.-- The Army has made significant changes to the processes used in…