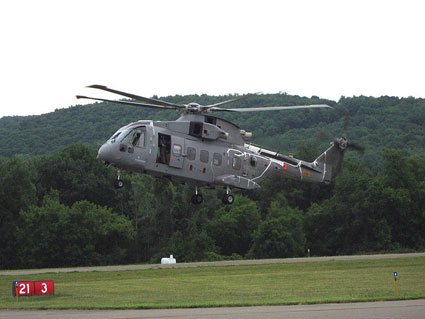 WASHINGTON– The VH-71 helicopter being developed as the next-generation presidential helicopter could get the ax before it ever takes flight.

President Barack Obama announced yesterday that he has directed Defense Secretary Robert M. Gates to conduct “a thorough review” of the program, which has experienced big cost overruns.

Speaking at the closing of a White House summit on fiscal responsibility, the president called the helicopter program an example of “the procurement process gone amok.”

“We’re going to have to fix it,” he said, calling it “one of our highest priorities” and urging congressional support.

Obama noted that Gates is a big advocate of the effort and “recognizes that simply adding more and more does not necessarily mean better and better, or safer and more secure.”

The president offered a lighthearted take on the helicopter Lockheed-Martin is developing to replace the Sikorsky Marine One helicopters the White House has used for a quarter-century. “The helicopter I have now seems perfectly adequate to me,” he quipped. “Of course, I’ve never had a helicopter before. … Maybe I’ve been deprived, and I didn’t know it.”

The VH-71 contract calls for 28 helicopters for $6 billion, but the cost has almost doubled to about $11 billion.

Cost overruns of this magnitude in major defense acquisition programs require congressional notification. This requirement was established under the so-called Nunn-McCurdy provision of the 1982 Defense Authorization Act. The provision was named for its sponsors, U.S. Sen. Sam Nunn and U.S. Rep Dave McCurdy.

The VH-71 program “certainly fits the category of requiring a Nunn-McCurdy breach notification, and that is not a good position to have a program in,” Pentagon spokesman Bryan Whitman told reporters today.

The program will be among many to get a thorough review during the acquisition overhaul, he said. “We are committed to looking at expensive programs, particularly those programs that are underperforming,” Whitman said.