by H. Gerald Rudd
in Uncategorized
0

0
SHARES
3
VIEWS
Share on FacebookShare on Twitter
Get real! Having armed guards with M16s at the church entrance every Sunday morning benefits no one. But this is America, and we still have the right to protect ourselves. A Ruger LCP handgun—or one like it—legally concealed is perfectly acceptable Sunday attire. But please, check your concealed carry laws before heading to mass.

On Nov. 13, 2008 a group of self-described homosexual anarchists called “Bash Back!” attacked the Mount Hope Church in Lansing, MI during worship.

On July 28, 2008 two people were killed at a Unitarian Church in Knoxville, TN as an angry resident vented his hatred at those in Sunday services. On March 9, 2009 Fred Winters, pastor of First Baptist Church, in Maryville, IL was killed by an intruder during services. On August 23, 2009 Pastor Carol Daniels was found murdered behind her pulpit at Christ Holy Sanctified Church in Oklahoma. Such events only used to happen in places like Pakistan or Iraq, but they are becoming more common here. According to Vaughn Baker, President of Strategos International, there were 18 church shootings and acts of violence in 2008 in the United States—but in the first nine months of 2009 there already had been 17 such incidents.

Strategos International
Strategos International, based in Grandview, MO, is attempting to meet the need among schools, corporations and churches to develop a strategy to preclude such tragedy. (More information is at www.intruderresponse.com.) This writer attended a two-day seminar by Vaughn Baker and Mike Owen, a Strategos instructor. The first day of the seminar was titled “Inter-Faith Church Security & Intruder Response” while the second day was presented as “Inter-Faith Intruder Response/Awareness & Conflict Management.” It took place in Fayetteville, AR at the Mount Sequoyah Retreat Center.

Participants came from Arkansas, Texas, Oklahoma and Tennessee, representing Church of God, United Methodist, Unitarians and others. There were active LE, retired police officers, pastors, lay leaders, and at least one-third were women. All shared concern for safety of their congregation. Some of the congregations represented had already begun efforts to provide security, ranging from those who knew that they needed to do something but did not know what, to those with security teams in place. A stark reminder of the need was brought home by the murder of Pastor Carol Daniels two days prior.

Vaughn Baker and Mike Owens have impressive credentials in this field. Baker had 20 years as a LE officer in Lee’s Summit, MO, including 13 on the S.W.A.T. team and four years as a detective. He also was in the Army Reserve, Military Police Corps. Mike Owen had a similar background with almost 27 years on the Springfield, MO police department with 13 years on their Special Response Team. Since his retirement, he has worked with the Department of Justice providing training for LE officers in third-world countries. These men were well trained and had excellent experience, giving authority to their instruction. They also are active in the church body where they attended and were on their security team as well. They not only taught it, but they practiced what they taught. 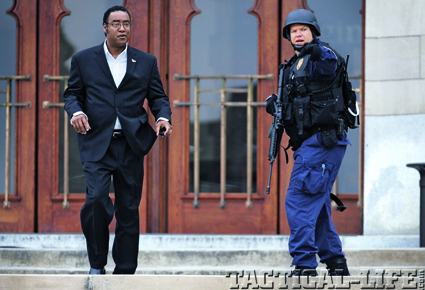 Community leaders should use the Virginia Tech massacre as a reminder that S.W.A.T. can’t be everywhere all of the time. Tragedies can be avoided with proper training.

It is important that churches do not become armed compounds. They should be inviting environments where people can worship God as they choose. It can be difficult for pastors and leaders to decide how to be proactive to dangers without making people feel as if they are criminal suspects. This seminar made a strategic effort at addressing this dichotomy of responsibilities, noting that it might not be possible to negate all danger. Possibly one of the most startling statements made in this entire seminar was that preparation did not mean prevention—but that it does mean immediate response.

Strategos International presenters app­roached the subject from the viewpoint that there is more than one way to provide security. They reviewed various methods, from hiring local off-duty police officers or security guards, to having security cameras in place. But the suggestion that stood out the most was the idea of a “layered security.” This was noted as the same strategy that the Secret Service employs in protecting the President. This has to be adapted to fit a local congregation, but the basic idea is to recognize the threat before it reaches a location where it could cause maximum damage. By using parking-lot attendants, greeters, ushers and the security team, you would have a layered protective team in place. If these individuals were trained and observant they would provide the local congregation the highest possible security. 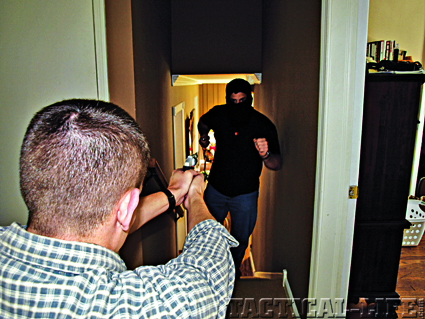 The aim of Strategos International’s training programs is to keep law-abiding citizens situationally aware, ready to defend and protect themselves no matter where they are.

Strategos International provided user-friendly material, including a “risk assessment” evaluation. The attendee can take that information back to their congregation and walk through the risks that they face. Those who have nurseries and children’s ministries that meet in different locations in their buildings or campus recognize there are more issues to consider than just someone attempting to shoot the pastor. Preventing such things as parental kidnappings or child abuse was also addressed. The assessment that each congregation would make with this material would enable them to determine what level, or levels, of security were needed. One congregation that was represented had someone come onto their campus with a rifle within the past two weeks. It turned out that the individual was merely bringing a gun to a friend—but the church’s security team responded promptly to this issue.

INTRUDER RESPONSE TRAINING MISSION
Simply stated, our mission is to provide corporate, educational, church, law enforcement and military professionals the highest quality training available. Training that is both applicable and based in reality is critical to successfully applying our training methods when needed.

Strategos’ creed can be summed up as follows: Capability breeds humility. In other words, crisis situations are more likely to be handled effectively and appropriately if the end user feels more capable of handling them. Without Strategos’ response training, situations can unnecessarily escalate because the end user is operating from a “fear-based” mind set.

Measuring Success
Strategos offers courses that are a wise investment for those serious about achieving success. Success should be measured based on the following:

PREVENTION of a critical incident with effective intervention prior to an event based on learned precursor indicators.

REDUCING liability and managing risk based on documented and proven doctrine and training methodology of adult learning principles. For more information visit Intruderresponse.com.

Discreetly Detecting Danger
Part of the training dealt with observing and approaching people, using the advice to “see something, say something.” It was a reminder that often people think that they see something strange, but fail to act on that knowledge. One pastor with a security plan in place used a term “aggressive friendliness” to describe the demeanor of those dealing with security issues. Strategos International actually taught those present some methods of handshaking that allowed the individual to more closely observe the person who has entered the door. It provides a method to take a closer look and to possibly detect if they have a weapon, without being obtrusive, but if a person is a normal attendee it just appears that the greeter is a friendly person.

This seminar dealt with the questions of lock-downs, being calm under duress, compliance control, assessing the danger as well as how to address those issues. They brought to the attendee the question of armed security, and that individuals who merely have a concealed carry permit might not be the best answer for a congregation. It was noted that some states make it illegal to carry a weapon into a church building. They also reminded participants that it is wise to make local law enforcement aware of the security that you have in place. There is great benefit to having face-to-face meetings with law enforcement officials and developing an awareness of their method of response.

Strategos International covered a lot of material during these 12 hours. They have other training that is much more detailed and allows the participant to actually fire up to 2,000 rounds in training. The training is well worth a local congregation sending an attendee, or to bring the firm to your own locality and provide professional training for churches in the community. One thing that is very important for the church setting, is the ability to provide security without it overwhelming their intrinsic need to be open to the community. Vaughn Baker has developed a seminar that is “church sensitive” and can be made to fit any congregation that desires to provide security for those who they welcome through their doors.