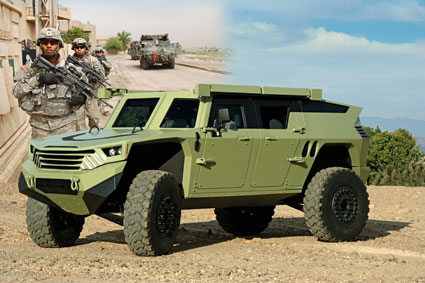 Every modern conflict has produced its own special imagery that touches a global audience and im­­­­­beds the tragedy of war into our shared consciousness. In America’s war in Iraq, photographs and video have captured no more poignant or disturbing scenes than the devastation to U.S. troops and equipment from the roadside bombs widely known as IEDs. Americans have learned that insurgents can wield disproportionate influence by fighting asymmetric warfare and IEDs are a case in point—they are among the crudest devices in use today, but they can wreak havoc on platforms never envisioned to withstand them. They capitalize on vulnerabilities in the countermeasures of far more sophisticated weapon systems, which were designed to neutralize equally capable threats, not home-made explosive devices. 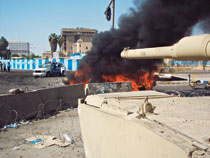 In this respect, the HMMWV (High Mob­ility Multi-purpose Wheeled Vehicle) has become a central issue in U.S. military operations on this asymmetric battlefield. HMMWVs have been in U.S. service since 1985, replacing the ¼-ton M151 MUTT (Military Utility Tactical Truck) and several other light trucks. This new vehicle resolved many of the M151’s operational problems, including a tendency to roll with high speed cornering, low endurance and payload and difficult adaptability to multiple missions. Today, there are more than a dozen variants serving as troop and cargo carriers, ambulances, missile platforms and other light transport behind front lines. The HMMWV did not, however, anticipate vulnerability to ambush attacks. In its main configuration, the vehicle is neither armored nor protected against NBC (nuclear, biological or chemical elements). Where HMMWVs came under fire in Mogadishu or Operation Desert Storm, their tough chassis held up reasonably well against gunshots but offered little shelter to their crews or passengers. The war in Iraq has magnified that deficiency as IEDs repeatedly have blasted convoys with terrible effect, leaving hundreds of troops dead or wounded.

Despite these problems, well more than 170,000 HMMWVs are in service today, and the Armed Forces must continue to rely on them for basic transportation, because it is what we have. Military units have searched for solutions to the HMMWV’s vulnerability, including such stopgap approaches as wrapping the vehicles with “hillbilly” armor plate or hanging personal body armor inside, or in some cases, even layers of plywood.

Another course involves the MRAP (Mine Resistant Ambush Protected) vehicle. These platforms can be effective against IEDs, but they hardly qualify as light, efficient trucks available in large numbers, and the lack of a common design clearly increases operational maintenance and support difficulties. For example, a recent Pentagon order for these vehicles calls for a unit cost of more than $500,000, 10 times higher than the HMMWV’s original replacement cost.

Joint Light Tactical Vehicle
In 2006, the Marine Corps, serving as project manager in cooperation with TACOM (the Army’s Tank-Automotive Command) and U.S. Special Operations Command, initiated a request for information on a new vehicle program that will lead to the HMMWV’s replacement for tactical missions—the JLTV (Joint Light Tactical Vehicle). JLTV will be worth more than $10 billion and is one of at least two HMMWV follow-on efforts. The second, FTTS (Future Tactical Trucking Systems) is considering two concepts under TACOM’s direction. The FTTS-Maneuver Sustainment version will replace larger vehicles, and the FTTS-Utility is meant to supplant HMMWVs. JLTV may incorporate this effort, which already has involved field tests of several concept vehicles.

As its name implies, the new vehicle will be multi-service and support the U.S. Army, Marine Corps and Special Operations Command, so Air Force and Navy units will utilize it as well. JLTV will be a family of platforms configured to handle a variety of missions, including combat tactical vehicle, command and control, light weapons platform, ambulance, utility transport, reconnaissance and combat engineer support. The Defense Department wants JLTV also to address five specifically identified capability gaps that the HMMWV is not adequately designed to cover. These are the movement of mounted combat forces, movement of mounted combat-support forces in multiple mission configurations; movement of mounted combat-service-support forces, also with a variety of mission configurations; movement of light airborne or air assault forces and movement of long-range reconnaissance forces.

Designed To A New Standard
Within each of these mission categories, the Defense Department also has defined how the JLTV should perform. The new design should protect crew and passengers during repeated attacks, if possible, using NATO STANAG (Standardization Agreement) levels to establish minimal and objective protection against a variety of threats. These threats include rifle fire, artillery ordnance, RPGs (rocket-propelled grenades), mines, kinetic energy devices, and IEDs. STANAG Level 4, which the government would like to implement, is stringent, calling for defense or defeat of explosions detonated at very close range. Other features will include self-recovery, ability to run on flat tires, fire suppression in the engine and passenger area, and an ability to ford streams.

In addition, JLTV will weigh in at less than 16,600 pounds, be air transportable as a CH-47 Chinook helicopter sling load (10,000 pounds for the Long Range Surveillance version that fits inside a Chinook), or internally in a transport aircraft, and be able to endure parachute drops. The minimum range calls for 350 miles at 65 mph, with an objective of 700, using the same fuel capacity as a HMMWV-A. Minimum payload for most missions will be 3,000 pounds, up to 5,000 if designs meet the program’s objective, although in some configurations JLTV could carry up to 7,000 pounds. The program also calls for an integral trailer design. Reliability requirements also are high, with a minimum of 90% mission availability and digital diagnostics to facilitate maintenance and repair. Finally, the new vehicle will be “network-enabled;” capable of broadband two-way communications as a node in the U.S. Army’s FCS (Future Combat Systems) common operating environment.

From Among The Best
Competitors for the JLTV may include Lockheed Martin, teamed with Britain’s BAE Systems Plc, which purchased Armor Holdings, manufacturer of body and vehicle armor. Another team involves General Dynamics Corp. and AM General, the HMMWV manufacturer. BAE, which is involved in MRAP production, has formed a second partnership with another MRAP manufacturer, Navistar’s International Military and Government LLC. The most recent program entrant, however, is a new team formed by Textron, Boeing, MillenWorks, and SAIC.

Textron Marine & Land Systems, manufacturer of the M1117 Guardian ASV (Armored Security Vehicle), has established a teaming agreement with Boeing Integrated Defense Systems’ Combat Systems division, currently the Lead System Integrator in partnership with SAIC (Science Applications International Corporation) for the FCS program, and MillenWorks, a California-based automotive design shop that specializes in tough, high-performance vehicles for off-road use such as the grueling Baja 1,000 race through the desert of Mexico’s Baja California peninsula. The partnership combines Textron’s proven record in combat vehicle design, development, production and support with Boeing experience in large system design and integration, systems engineering, modeling and simulation and lean manufacturing, with MillenWorks’ innovative engineering solutions to the problems of vehicle hard use, wear and tear.

Tom Walmsley, Textron Marine & Land Systems senior V.P. and G.M., explained the strategic alliance, “Our team brings together great vehicle heritage with significant system engineering capabilities to create the vehicle of the future. Our team is focused on a balance between protection, payload and performance while maintaining an affordable vehicle. This vehicle will be required to support multiple services and multiple missions. The team that figures out how to seamlessly support all these variations best will be triumphant.”

Walmsley sees balance among the JLTV’s capabilities and cost as the crucial challenge for his team and other competitors. “Our customer is looking for a package with a much better protection level than a HMMWV [plus] that has room left over to carry significant payload,” he said. In many ways, JLTV development will follow a path opposite from the big, heavy MRAP vehicle. “One critical factor in the new design is ease of transport. We have an absolute, no-kidding maximum weight of about 16,000 pounds, dictated by the load limit of the U.S. Army’s Chinook transport helicopter. Weight is a major segment of our performance box.”

Mission Statement: Protect The Warfighter
“Force Protection at the soldier level is a key performance characteristic of this vehicle,” said Jayne Schnaars, Boeing Combat Systems business development director. “We have to find innovative solutions to increase survivability while controlling our weight. Some of Boeing’s key technology thrusts within our Phantom Works organization will come into play to achieve this goal.”

We cannot control weight by adding more layers of armor, which is the MRAP approach,” Walmsley said. “We have to find alternatives.” Those alternatives include creative solutions on the vehicle’s suspension and drive train as well as its general shape and mold lines. “Another important element is advanced materials,” he added. “We have very unique materials in this vehicle. None of the major systems are standard.”

Walmsley could not disclose specifics in any of these areas, citing security.

“Another aspect of the program is the focus on variants,” Walmsley noted. “The HMMWV has been adapted to several missions, and the JLTV will need to handle these missions and more. We’ll win the competition by figuring out how to make the variants seamless. That means we must engineer simple, straightforward ways to make changes in the vehicle’s accommodations and capability to incorporate mission-specific systems.”

“The key to winning this program will be our focus on world-class system engineering, design, development and integration of mission-unique requirements for each of the JLTV variants,” said Schnaars. “In addition, Boeing’s strength in network interoperability ensures a strong, complementary partnership with Textron in order to provide the warfighter with a capable and safe system.”

One Design, Many Missions
The JLTV program office already has defined parameters for several variants, including the previously mentioned Long Range Surveillance vehicle, a relatively light-weight version that will fit into the cargo cabin of a CH-47 more easily than a HMMWV, whose clearance of just a few inches makes loading and unloading on the helicopter’s cargo ramp a slow process.

As for the future, Walmsley and Schnaars concluded that JLTV concepts could even find their way into commercial markets for special uses such as fire and rescue, LE and similar purposes. Citing CA. Gov. Arnold Schwarzenegger’s purchase of a modified HMMWV for personal use, Walmsley said the price of a JLTV would be too high for the average driver, but healthy production rates will enable the U.S. government and allied armed forces to take advantage of economies of scale and keep unit acquisition costs reasonable, given the added capabilities JLTV promises to deliver.

The government’s JLTV program office is scheduled to issue an RFP (Request for Proposal) by early spring 2008, with submittals required within 60 days and selection of the winner as soon as two months thereafter. According to the latest news reports, although the Army and Marine Corps want the new vehicle earlier, the first JLTV production delivery is expected around 2012, after the Pentagon called for completion of prototype development and testing before low-rate initial production begins. The new vehicles are expected to be in military service at least through the mid-21st century.

For troops tasked with vehicle patrols on future battlefields in the War on Terror, J-L-T-V may be a new way to spell S-A-F-E. 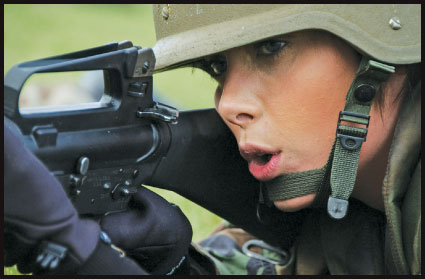