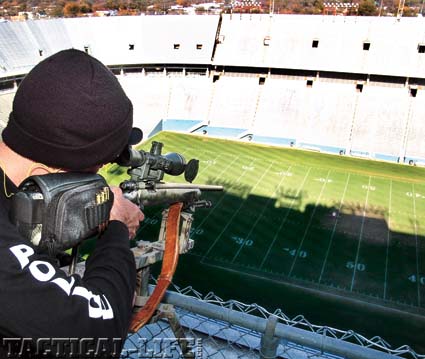 As early as 2004, the government has issued advisories that public venues such as arenas and stadiums had been identified as prime targets by terrorists. The potential for causing mass casualties in a venue full of unprotected citizens has an obvious appeal to evildoers bent on disrupting our way of life. A lone gunman or a violent, organized group could attack a professional sports event, rock concert, or even your son’s or daughter’s high school soccer game unless prepared and well-equipped guardians have been trained to identify, assess and counter that threat.

A few areas of the country already have law enforcement snipers at many venues. Unseen and unheralded, these law enforcement officers arrive hours before the event and leave hours later. They assess the venue, find the best vantage points and set up to provide armed overwatch without any of the patrons or fans being aware that local law enforcement officers have their back. However, not every game or concert can be protected; the skill set required to provide the precise marksmanship to eliminate a lone terrorist surrounded by innocent civilians is a specialty—one operators may not learn on the job. So where do you learn that very unique set of skills?

The Texas Tactical Police Officers Association (TTPOA), a longtime benchmark for some of the best tactical training in the country, now teaches SWAT snipers and precision rifle marksmen just exactly how to plan, equip and execute missions to provide overwatch in public venues. The need for understanding the complex ballistics involved with high-angle, long-distance shooting was proven by the 1966 Texas Tower event, when a lone gunman killed 10 innocent civilians with long-distance shots from a position 300 feet above Austin, Texas. As the shooter continued to rain accurate fire on the citizens, the counter-battery fire from the street was consistently inaccurate, with most rounds hitting predictably high above the shooter, on the tower clock face. Only when the shooter was engaged in a close-range firefight was the situation resolved.

Most snipers shoot prone with a bipod or off of a rest or pack. On the other hand, when your vantage point is several hundred feet above the ground at an acute angle to the target, your excellent Harris bipod is suddenly woefully inadequate—your only firing solutions are from either standing or sitting positions! That is why the TTPOA “Police Sniper Response to a Public Venue” course shows different and proven methods and equipment to keep the precision rifle on target to make first-round hits at hundreds of yards, within inches of the aiming point, regardless of the angle.

The course cadre and instructors included highly qualified snipers and operators like Mark Spicer, Mark Lang, Jim Smith and K.J. Canterbury, who focused on making sure the students would gain knowledge to make their own hometown venues safer by countering the threat of bad guys taking advantage of “soft targets.”

Classroom time is provided to teach the theory of how to deliver accurate high-angle fire. Shooting a bullet to hit a specific target at a distance over flat ground, or even at shallow angles, is a function of well-known ballistics—matching the flight path of the bullet with the range to the target to impact at a predetermined spot. However, shooting up (or down) at an angle effectively changes the amount of gravity that a bullet experiences during flight. A bullet flight of 400 yards over flat ground experiences 400 yards of gravity. However, at an angle of 45 degrees, the bullet may still travel 400 yards (the slope range) to the target, but only over 280 yards of ground (the horizontal range). That means gravity has less of an effect on the bullet, so it will not drop as much.

For high-angle shots (angles greater than 45 degrees, up or down, with a slope range greater than 150 yards), the direct path of the bullet is always longer than the distance across the ground, so the net result is that, if uncorrected, the bullet will always impact high (greater than 1 MOA). This means that the shooter must aim low to achieve accurate hits. To calculate how much, the slope range must be obtained by either estimation or a rangefinder. Next, the angle to the target must be determined. That can be as easy as a weighted string on a protractor or Mil-Dot Master, or reading the angle on a Slope Doper or a degree/cosine indicator attached to the scope of the rifle. Modern electronics like the Hyskore Ballistic Wizard Shooter’s Computer, or even a smartphone application, can assist the shooter in obtaining a firing solution.

Once the horizontal range is determined, then the scope dope for that range can be utilized for a first-round hit. For example, for a slope range of 250 yards and 45-degree angle to target (that is a cosine of 0.70), the horizontal range is 175 yards (250 x 0.70 = 175). The additional variable of wind offset needs to be addressed as well, and if shooting from a forward-moving helicopter, operators must include a reverse lead. 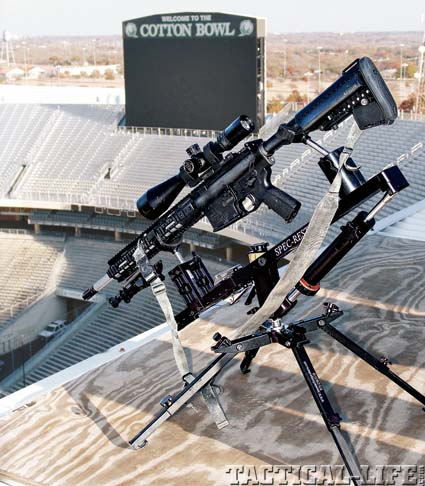 The Lone Star Spec-Rest provides a stable, rock-solid platform for high-angle precision, yet it’s easy to reposition under stress.

The unique aspect of the course is that the shooters then exercise the high-angle shooting fundamentals and specialized equipment with live-fire exercises and drills within the world-famous Cotton Bowl. However, before any rounds are fired during the class, the course trainers had to be thoroughly satisfied that each student has demonstrated the ability to consistently place rounds within inches of designated aiming points, first at the range then at a known distance over level ground in MGM bullet traps.

Shooters also had to practice with specialized equipment, including the Lone Star Field Products Spec-Rest, which looks more like a photography tripod, but is perfect for high-angle shots and is commonly used for public venue-type missions. The Spec-Rest is able to be deployed, pre-registered and left set up with the rifle out of sight. When needed, the firearm is simply dropped in the yoke in the exact position needed and targets can be engaged. The TTPOA also stressed that LE marksmen should establish contact with the manager of each local venue, as this will help operators locate a suitable place to stage a team within the facility if needed.

Inside the Cotton Bowl, the students practiced sectorization to identify and engage targets called out by a spotter. That showed the importance of substantial pre-work so that every officer in the venue, using a seating chart of the stadium, can communicate locations precisely using a common reference like “row 36, section 140” instead of “shooter in the lower bleachers.”

The students then responded to simulated hostile events at various positions within the stadium. The drills included deployment from different levels, an armored vehicle and from the Texas Department of Public Safety’s helicopter, piloted by Sgt. Jim Rohrman. Students had to make immediate and accurate shots while working their radios to obtain realistic intel as the stadium was hypothetically being rocked by detonations and gunfire during each run.

Now criminals, terrorists and violent opportunists may be thwarted because a guardian, a law enforcement precision shooter, is keeping vigil out of sight so the fathers, sons, wives and daughters can enjoy the game or watch the show with little fear or danger. Because of all the trainers involved, the public can have a little peace of mind. For more information, visit ttpoa.org. 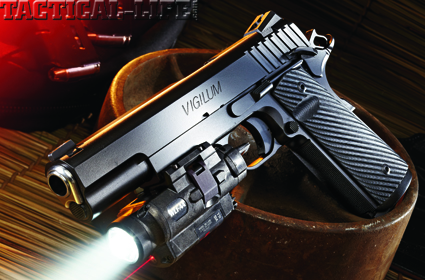 The ADEQ VIGILUM .45 ACP handgun is a custom-built railed 1911 with combat reliability...