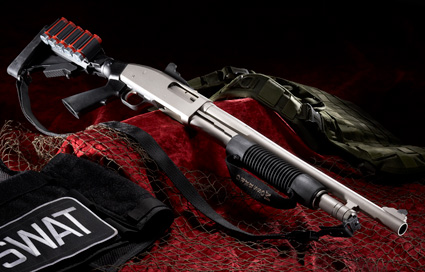 The “average” law enforcement agency in the Unites States has 12 officers and five support personnel: Half have fewer. These small agencies may patrol vast areas, or inhospitable environments, so have special equipment needs.

A small department in Vermont asked Mossberg to make a run of six pump-action shotguns with particular features. Mossberg “stepped up” to help this agency by making a Model 500 with features this agency requested. This level of commitment to American law enforcement is noteworthy.

Small Agency, Big Needs
Chittenden County, Vermont surrounds Burlington. Vermont has a climate with hot, muggy summers and winters with snow hip deep for months. Chittenden County serves a population of 150,000 and terrain runs from urban to suburban to rural. Their primary long gun is the pump-action shotgun, but even as reliable as the type is, pump actions do wear out. Lt. Bob Stebbins, Chief Firearms Instructor for the CCSO explained how they came to look at Mossberg shotguns:

“During our shotgun qualifications in 2007, Sheriff Kevin McLaughlin fired our existing shotguns, many of which were three decades old.The brass bead front sights on the guns were not user-friendly when shooting rifled slugs. We had one gun with rifle sights and the Sheriff always nudged other deputies out of the way to grab that one when we qualified. He remarked to me while shooting slugs, ‘It’s a lot easier to hit where you want with this shotgun because of the sights. Let’s get some new shotguns ordered, ones with high visibility sights.’ With marching orders in hand, I set about to find a shotgun that would be suitable for our Vermont climate, as well as our wide variety of missions here in Chittenden County. These include search and rescue, support of other law enforcement agencies, criminal investigations and arrests, service of civil process and our very active snowmobile patrol program during the winter.”

Desired Features
Lt. Stebbins noted, “I needed a finish that was corrosion resistant. I also needed a stock that would adjust to the deputy using the gun. Our deputies come in all shapes, sizes and gender and they wear concealable body armor. This adds bulk to the chest and shoulder area so an adjustable stock seemed very sensible. I also wanted a way to carry a few extra rounds on the gun. When any law enforcement officer bails out of their car on a hot call and they grab the shotgun, they usually respond with the ammo that is in/on the gun. I wanted our deputies to have as much ammo as possible.”

Purchasing a pump-action shotgun that was light, easy to use, had high visibility sights, a rust resistant finish, an adjustable stock and fit the budget of a small agency wasn’t easy. Lt. Stebbins decided to contact Mossberg directly to see if they would be willing to build his agency a specific gun. “The Model I found on the Mossberg website had everything I wanted: the Marine Cote nickel finish, adjustable stock and a short barrel making it handy for the variety of missions we perform. The only thing it lacked was the ghost-ring sights the Sheriff wanted…For liability purposes we wanted the gun to come from the factory with all needed accessories.

“So I contacted Mossberg and was put in touch with Mossberg’s Vice President for Marketing, Mark Kresser… [who] agreed to create a special part number for this shotgun for the Chittenden County Sheriff’s Office. I was amazed that a major manufacturer was willing to go through this aggravation but in the end we got exactly what we wanted—a value priced, corrosion-resistant shotgun, which is handy and easily controlled. The pistol grip makes training common, since our pistols, AR-15 rifles and now our shotguns all have a pistol grip. The fully adjustable stock fits my smallest and largest deputies easily and the magazine capacity is adequate for our needs. It also has a side saddle for five extra rounds that is attached to the gun.”

Today, Chittenden County is very happy with their Mossberg 500 shotguns and I asked Mark if he could make just one more so I could share this story, and the gun, with the readers of Tactical Weapons.

Test and Evaluation
Priority with a shotgun intended for combative purposes is to pattern it at varied distances with the loads intend for carry. I selected Hornady’s 8-pellet reduced recoil pump load, as I have found it to pattern very tight in a variety of guns. I started at 5 yards with a head shot then moved to 10 yards with a shot to the chest or “A” Zone. I increased the distance 5 yards at a time until I got to 30 yards where I lost a pellet in an otherwise satisfying pattern.

Since 18 yards is often considered the outside range for buckshot, using a buckshot load out to 30 yards is encouraging. Inside 20 yards, the pattern was not much bigger than the 8-inch A Zone of the IDPA target. I switched to slugs, using the excellent ghost-ring sights. The rear sight is fully adjustable with markings allowing you to confirm zero if the sights are moved. The bright florescent orange front sight is the best factory produced front sight available—found quickly and easily, while offering good contrast against all backgrounds. With adjustment, I was hitting Pepper Poppers out to 100 yards with boring regularity. This pump-action shotgun really does have a lot going for it.

The sling was made by Outdoor Connection. At the 2009 SHOT Show I spoke with them about making such a quick-adjustment, two-point sling that was simple to use and without straps and buckles. They sent me a simple 1-inch strap with a tab that is easily released and locked. The tab can also be used to pull/push the sling to the desired length. While this sling is not “Ninja-like,” it is functional and simple to use, and reliable.

As part of the CCSO package, Mossberg added a retention strap on the fore end which keeps the hand in place. I have seen this on short-barrel guns to keep the hand from sliding off in front of the muzzle at an inopportune time, but this is the first gun that I tested that had it on an 18-inch barrel. As I worked through a number of fast-action drills, I came to appreciate the strap as it did solidly lock my hand to the fore end and eliminated that painful “pinch” that occurs when you allow your hand to slide to the rear of the fore end and it gets in between the receiver and pump action.

I resisted shotgun pistol grips for many years as the traditional stock works fine and why change? But a pistol grip offers continuity between the semi-auto pistol, AR-15 and shotgun, as Lt. Stebbins alluded to. It also places the hand directly behind the trigger, a more natural location for a consistent press of the trigger face. I have also come to appreciate the adjustable AR style stocks that are now available on many shotguns. For years agencies struggled with proper length of pull for a wide range of officers. In some cases, small-statured and female officers would leave the shotgun behind on hot calls as the gun was too painful to shoot. An adjustable stock can alleviate this problem. The thick rubber butt pad on the CCSO Mossberg also helps reduce perceived recoil and keeps the gun from “walking” on the shoulder during rapid fire.

It’s A Semi-Custom!
The Chittenden County S.O. ended up with a fine shotgun that will last them for many years. With routine maintenance, this Mossberg 500 will handle situations both near and reasonably far, stand up to the diverse weather that northern Vermont has and fit a wide range of LE officers. It’s good to see that companies like Mossberg are willing to work with both large and small agencies equally, in the event you or your agency is looking for a new cruiser-grade shotgun. This semi-custom Model 500 might just be the shotgun your agency is looking for. For more information visit Mossberg.com. 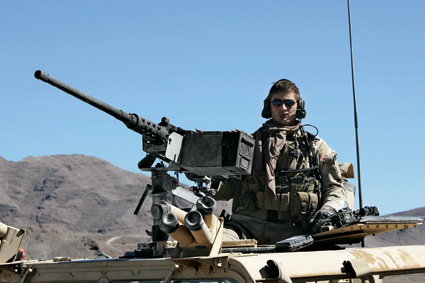 ON THE LOOSE WITH MA DEUCE