Several years ago I began a quest of sorts. After many years of fielding a number of weapons for entry, a 10- to 12-inch barreled AR platform in 5.56mm was determined to be the best choice. It is just hard to beat the versatility, availability of accessories, and the familiarity. The 16-inch barrel is best for patrol, but the shorter barrel is better suited to entry work for a number of reasons: it is handy in close quarters, provides adequate ballistics in those same close quarters, and allows for the use of a suppressor without making the rifle too long. Through some great forethought on the part of our Chief and Patrol Captain, we are moving in that direction as quickly as possible. As should always be the case the troops are the first priority, which meant as a Lieutenant it was going to be a long time before one graced my kit; if ever. Lucky for me my outside employment centers around guns and suppressors, and having sold and dealt with both for years it allowed me to pursue my quest for a similar rifle and suppressor starting with an M16 lower.  It then became time to find the short upper and suppressor to go with it.

The quest started with a standard gas impingement 10.5-inch upper. In standard form it worked fine. It shared all the good points of a short barrel as well as the downsides. It was loud…oh yeah, and it was loud! It also ran really dirty. This system has been known for getting dirty in a hurry with the 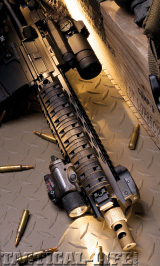 standard barrel. Shorten it and add a can and it is compounded significantly. Not only does it foul the magazine something awful you about need a respirator after a good shooting session. The simple physics of gas suppression, coupled with a system that sends that gas back into the action (right by your nose) results in what I refer to as “gas sucking.” No, not a technical term, just a reality. Shoot one of the short rifles with a can on it any length of time and you suck up a ton of expended gas from the chamber. The simple solution seemed to be the gas piston upper receivers that are out there. More and more were hitting the market so it was time to give them a try.

The opportunity arose to try the two most prevalent systems at the time. Given the design one would think it would about eliminate “gas sucking.” As each was put to the test it was quickly discovered that was not the case. Differing designs seem to have different affects when suppressed. It was clearly better, but in the case of these two systems there was still quite a bit of gas sucking going on. In the case of one upper there was barely a difference. Other systems than the AR platform actually performed better, but that would put me in a completely dissimilar system so that was not really a choice. Great success was experienced with the G36 system, and the 416 for sure. The G36 did not meet the requirements and there was not enough room on my home mortgage for the 416. So, for a while the quest was put on hold. Until it seems fate brought me to Stacy and Dean of PWS (Primary Weapon Systems).