by Todd Burgreen
in Uncategorized
0

0
SHARES
160
VIEWS
Share on FacebookShare on Twitter
Tricked out in Flat Dark Earth Magpul accessories and ready for battle with an EOTech HWS mounted, the PWS MK107 Diablo with its 7” barrel proved to be 100% reliable with a piston operating system similar to an AK-47’s.

It’s no secret that the AR is the best-selling civilian and law enforcement rifle in the U.S., and it’s becoming more and more popular around the world because the U.S. has trained/equipped so many entities since the end of the Cold War. The shiploads of state-manufactured AK-47s generously given by the Soviet Union have dried up. This has caused many manufacturers to jump on the AR bandwagon in recent years. Of late, the most attention seems to be on “improving” the platform via developing piston-driven ARs in lieu of Stoner’s original gas-impingement design. Whether or not piston-driven rifles are superior to their gas impingement brethren often generates heated discussion. This leads us to Primary Weapons Systems’ (PWS) unique contribution to the AR field with its MK1 series of long-stroke piston-operated ARs.

The PWS MK1 series began with the fascination in the simplicity and reliability of the AK-47 combined with a deep-rooted appreciation for the ergonomics of the M4/M16 platform. The MK1 series has been used in Iraq and Afghanistan, and has gained wide popularity with security personnel, law enforcement and civilians alike. 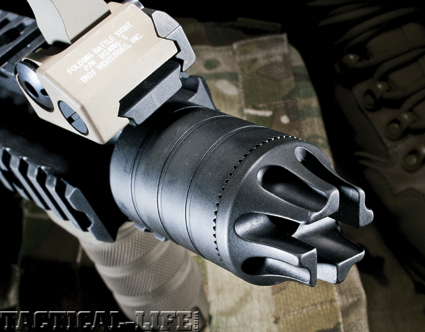 The PWS CQB Comp addresses the notorious muzzle flash associated with short-barreled rifles. Its two-part design starves off oxygen so no fireballs are created per shot.

Significant product improvements have been made over both the direct impingement operating system and previous offerings of piston-driven operating systems. PWS product improvements address reliability and performance issues as well as reduced carrier tilt, cam pin wear and carrier bounce. PWS seeks to maximize the 50-year-old AR design in terms of reliability and operating efficiency. The MK1 series is available as complete carbine or rifle or as a “drop-on” upper receiver for use on the lower receivers of existing M4/M16-style lowers, which is the path chosen for this review. 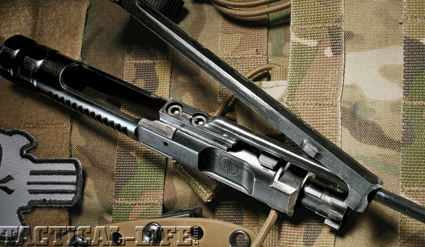 PWS’ MK1 bolt carrier group with the long stroke system is extremely durable and handled 700 rounds downrange with ease, even in select-fire.