The PWS MK214 is a solid fighting carbine in every sense. The platform allows the use of any of the most common accessories such as the Grip Pod GPSLE Model, LaserLyte’s Kryptonyte Carbine Green Laser K-15 and Trijicon’s 1-4x24mm AccuPoint riflescope.

There has always been this tendency in the law enforcement world to try and put everyone’s needs into one neat little package. It seems to be inherent in the profession, and often police agencies line up to see what everyone else is using or doing to decide what they are going to do. Much of it is that whole liability thing, since some still seem to believe that as long as they follow the leader, they have some protection if the leader made the wrong decision. The choice of firearms for officers is not immune to this… in fact it is “Exhibit A” for many of these decisions.

The PWS proprietary buffer tube is made to military specifications and will accept any
mil-spec buttstock such as VLTOR’s EMod stock.

A really good example is the move to rifles by many SWAT teams. Overall that has been a good move, but some agencies that are about as urban as you get, have started to go back to pistol-caliber subguns. You can argue the decision all you want, but it makes the point that moving to a particular system may be perfect for one agency and a waste of time and money for another.
Just as many urban agencies have decided that rifle rounds in 5.56mm NATO or .223 are too much, others in rural areas are reaching the conclusion they are simply not enough.

The carbine comes standard with Magpul polymer folding back-up sights that sit on the uninterrupted strip of Picatinny rail along its top.

A debrief on a shooting several years ago brought this to light in a clear fashion. Officers responded to a request for help by young children on a farm. This was a very rural part of the country and the officer had to drive up a long dirt road to get to the property. As he arrived the children were walking towards him. The next thing you see through the dash cam is bullet holes in the windshield and debris flying. The officer grabbed the kids and backed out with haste.

Turns out the father had killed his wife and was going to kill the children. As the officer arrived he was taking fire from a .30-06 hunting rifle at close to 300 yards. Given the ability to find cover, returning fire with a 5.56mm AR at that range may not be the best choice. A .308 rifle would be my preference for sure, unless of course something bigger was available! Either way it highlights the need for a reliable rifle in a battle rifle caliber for some, if not most agencies in this country. It is easy to say the .223 is enough from behind your desk; it is a lot harder to make that argument from behind your car receiving fire from a .30-06.

For a myriad of reasons, the AR-style rifle has become the preferred platform for many in the law enforcement world. The most obvious is the ergonomics, and the fact it is the platform of choice for our military. It has dominated the law enforcement market for years, if for no other reason the solid support at the manufacturer level. Unlike most, to me it is not the be-all/end-all of carbines, but it is clearly the preference, and if functioning properly it is a fantastic platform. As the move to the 7.62x51mm (.308) has been made, especially in the piston-driven market, the reliability has not always been stellar.

Part of the problem is magazine tolerances as the room for error in this caliber is substantially less than in others, and magazines are pretty much all third party manufacture. You have to make your gun work with the myriad of magazines out there. The other is a perceived need for precision accuracy in everything these days. Everything is about groups, and small holes in paper at 100 yards. If we ever start fighting small paper targets in the real world this would be pertinent. For now, at least, the threat is 3D, moves, and is bigger than an inch.

As critical as top-notch accuracy may be in a precision rifle, it is anything but critical in a deployment or battle rifle. Accuracy is great, but it can be a trade off for reliability, and in the real world that is a balance. If you are a patrol officer and not a police marksman you will (or should) seek absolute reliability over pinpoint accuracy. What was really needed was a rifle that was designed for that operator in mind, the one that walks the street, not haunts the target range. It seems that Primary Weapons Systems has again answered that call.

The PWS proprietary buffer tube is made to military specifications and will accept any mil-spec buttstock such as VLTOR’s EMod stock.

The Primary Weapons Systems MK2 rifles were designed from the ground up as a “door-kicking gun.” The idea was to create a battle rifle that could be used by patrol officers, troops, or those who want the large caliber on entry. It is not a precision rifle, nor was it designed to shoot tiny little holes in paper. It was designed to run reliably, even when dirty. It was designed to have all the accuracy you need without the tradeoff in reliability.

The MK214 is designed around the SR25 platform. This is the platform currently used in the military and supports the magazines that are in inventory. It is a piston-driven rifle using their proprietary long-stroke system. This system reduces fouling, carrier tilt, and carrier bounce—all things that go towards reliability.

It is fitted with a stainless steel barrel that is treated with Isonite. This is a new coating that protects the barrel better than chrome without all the inherent problems with chroming barrels. It is button-rifled with a 1-in-10-inch twist. The barrel on this model is 14 inches long with a permanently attached FSC 30 muzzle brake making it a total of 16.1 inches. The internals are Micro-slicked for reliability. It has a set of MBUS sights, an MOE stock and grip, and one PMag 20-round magazine. It also uses an Enhanced Charging handle.

Handling this rifle, the first thing you notice is the weight. It is well balanced and not as heavy as most of these piston-driven .308 rifles. It handles and feels like a 5.56mm model for the most part. The rifle also sports the attention to detail for which Primary Weapons Systems has become renowned. This is an incredibly nice rifle, built to a very high standard. The MBUS sights will do the trick, but for testing there were a couple of changes made. The first was the addition of my VLTOR EMod stock. Since this rifle uses their proprietary buffer tube and is milspec, it slid right on without issue. My tried and true EOTech EXPS3-2 was added for sighting, and a Vickers sling for carry. All of the PMag and a few DPMS magazines were grabbed for the testing.

Since this is a combat rifle and not designed as a designated marksman rifle, it was mostly tested with this idea in mind. The vast majority of ammunition used was Federal AE 150-grain FMJ and some military surplus stuff that was lying around. After a break in the rifle was fired using multiple double taps, triples, and lots of movement. This rifle points incredibly well and you really notice the lack of weight. After a hundred rounds or so you practically forget it is a .308. The report reminds you that the brake is loud, certainly to be expected with this caliber. It does however really tame the recoil. Holding this rifle through multiple three-target drills was a cinch. It just sits there—no real recoil and no real muzzle rise. It reliably kicks the ammunition out with each trigger press. It ran everything it was fed, to include some 150-grain polymer-tipped rounds.

Accuracy was quite good actually. After a good 400 rounds of various ammunition, it was tested for battle rifle accuracy. To me, that is a 10-shot group from prone. The American Eagle ammunition had been making one ragged hole at 50 yards all day, so that was used. It is commensurate with the bullet weight most troops would use for sure. From prone in the snow on a drag bag using the EOTech, it put 10 rounds into about 1.75 inches at 100 yards—that is plenty accurate for real work. Another group was fired with some old Federal TRU with the 150-grain Nosler and it did the same thing. There is no doubt this rifle is accurate, more accurate than it really needs to be as a battle rifle—a pretty good bonus.

Lastly some time was spent moving through the shoot house. Even with the rifle plates it was fast and pretty much pointed like any of the other carbines deployed in recent years. More time was spent pressing the trigger quickly, and it was a ton of fun to shoot. Even after heating it up, the forend did not get so hot it could not be handled. It is cold up here, so tactical gloves were used but it was manageable even after three consecutive 20-round magazines. That was the last test. Three of the PMags were loaded up with a smattering of everything that was there and a continuous fire drill was completed. This was not a “press the trigger as fast as you can” kind of drill—It included movement from target to target firing doubles and singles, moving between targets. It just continued until all the ammo was gone. No malfunctions at all, so it worked as well as can be expected, and to date is the only one of these in this platform that has done that consistently. 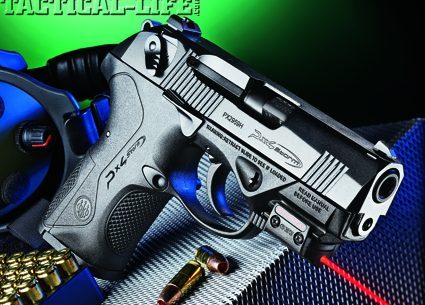 The PWS MK214 is a solid fighting carbine in every sense. The platform allows…